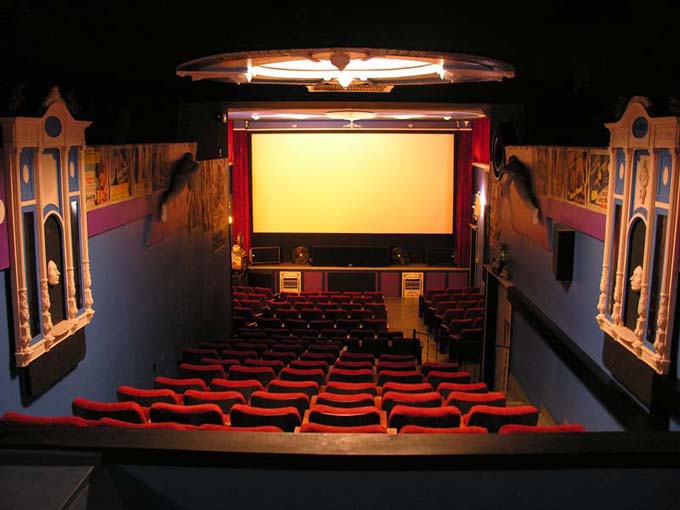 Happy birthday to a Kinmount landmark. On May 1, the Highlands Cinema opens for its 30th season. We often talk about ‘what puts Kinmount on the map,’ and our local cinema sure fits that bill. Anytime an outsider asks ‘What’s in Kinmount?’, our local movie theatre certainly comes to mind. It is one-of-a-kind!

This year, Keith Stata is celebrating the 30th anniversary of the operation in the current location. But the story goes back much further than 1979. Keith started in the movie industry at age 6. I won’t give you a date, but let’s say a lot of water has passed under the bridge since then. He dabbled in movie-making in the early years, but eventually he realized his success lay with the ‘showing’ of movies and collecting of historical items related to the industry.

I remember watching movies shown by Keith in the basement of the Community Centre, Anglican Church Hall and then in the basement of his house. This was the site of the famous bed in the floor, but then, everyone sat on the floor back then! In 1979, Keith took a large leap of faith and built a 58 seat theatre on the side of the new family home. It was his ‘rec room,’ and one exit actually led through the kitchen! I remember having him talk with his mother leaving the theatre!

The Highlands Cinema got off to a slow start. Many people could not believe Kinmount actually had a cinema. Rumour spread it was actually a TV set in the basement! But under the old adage, ‘If you build it, they will come,’ Keith carried on.

A large expansion of the museum, additional washrooms and the addition of the fourth theatre was undertaken in 1995. In 1996 the fifth theatre, and a second candy bar was completed. In 1997 & 1998 further additions were made to the museum. In 1999 theatres 4 & 5 were enlarged and improved. The year 2000 saw further improvements to the existing theatres and the installation of air conditioning. In 2001 more museum space was added. Just about every year has seen improvements to picture, sound, and sight lines to make your moving going experience more enjoyable.

The Highlands Cinema plays first run movies. When an ad says ‘Opening Friday at a theatre near you,’ I explain that means Toronto, maybe Peterborough & Kinmount! You know, ‘the Big 3.’ But it is not movies that make the Highlands special, it is the museum. Where else in the world do you enter a cinema through a museum? It is the atmosphere that drives the Highlands Cinema. The website says the museum is 4,000 square feet, but I prefer to measure it in acres! The complexity of the displays truly mean you cannot see it all in one visit. To a historian it is paradise. There is usually congestion in the foyer, partially by those in line to buy tickets, but also by those who are gawking at the foyer displays, mesmerized by the richness of movie history that attacks the patrons. And that is just the start. The twisting labyrinth of corridors, displays and history occasionally leads to ‘lost patrons.’ To the newcomer, it seems endless.

Another passion for Keith is his collection of antique movie projectors and related historical paraphernalia. Keith has supplied items for many museum displays, movie shoots and special events all over Ontario. He has refurbished hundreds of projectors rescued from numerous cinemas and theatres. His preservation of movie history has made Kinmount famous.

Over 85 (and counting) TV, newspaper & radio articles have documented the uniqueness of the Highlands Cinema. Talk about putting Kinmount on the map! A guestbook also tracks the long list of celebrities who have ‘checked out’ the Cinema in the bush.

And that’s not all! The Highlands Cinema operated from May to Thanksgiving only. During the peak summer season, up to 15 shows per night are on the schedule. Bus tours from all over come to see the movies and/or the museum. The Highlands is a favourite destination for school trips, ranging from Kindergarten to college. Keith runs all 5 movie projectors himself. He prefers the older ones: they are better made he says.

May 1 is the traditional opening of many things in Kinmount: spring season, cottaging, fishing, gardening & the opening of the Highlands Cinema. To see how most locals view the Highlands, just check out the children’s stories on ‘what I like about Kinmount’ in this (and other) edition. OR as the slogan goes, ‘In Kinmount you remember not only the movie but the theatre! Happy birthday Highlands Cinema, Keith, Roland & staff: you put Kinmount on the map. 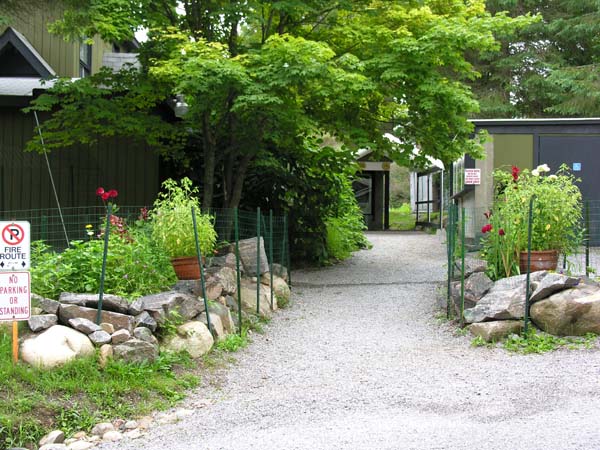 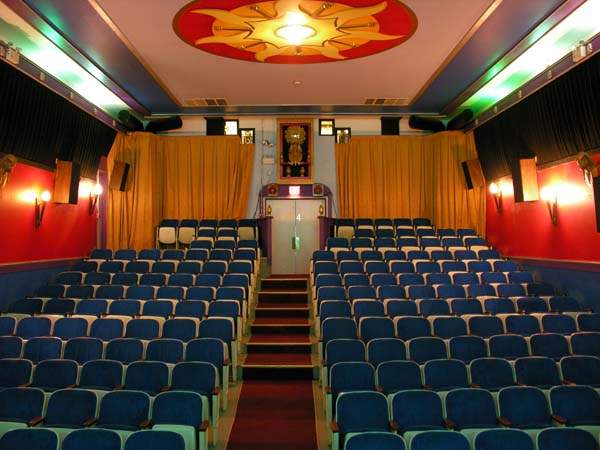 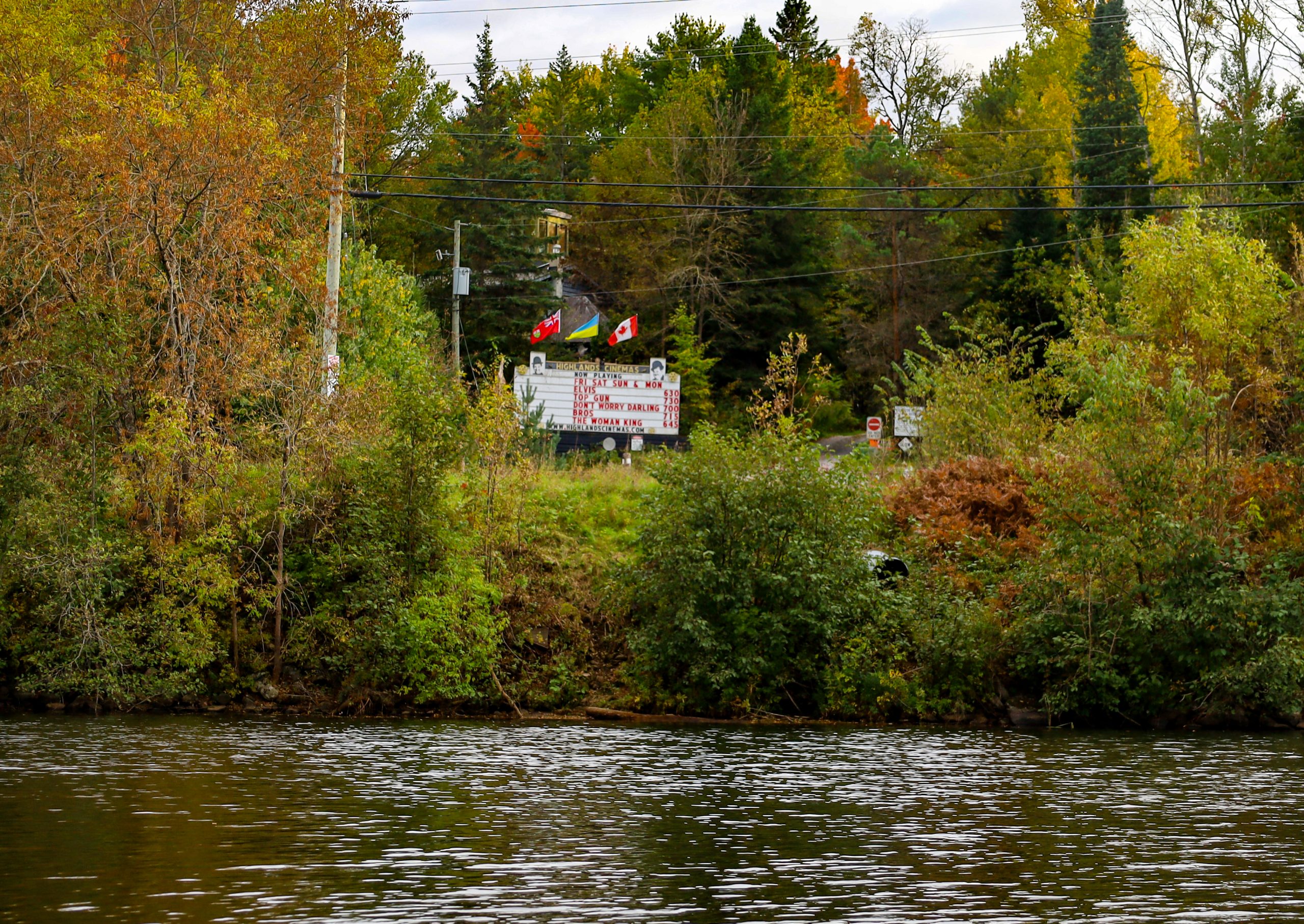 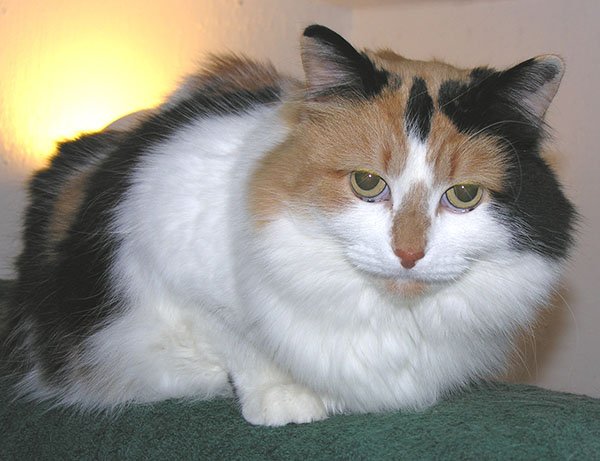 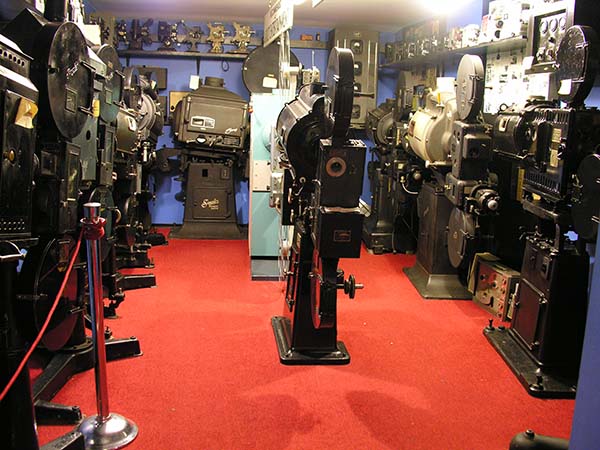 View from the Parking Lot

Highlands Cinema from the Burnt River

Cali, one of the many cats that Highlands Cinema cares for

An Exhibition of Projectors at Highlands Cinema 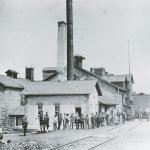 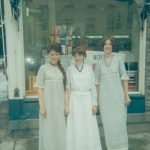