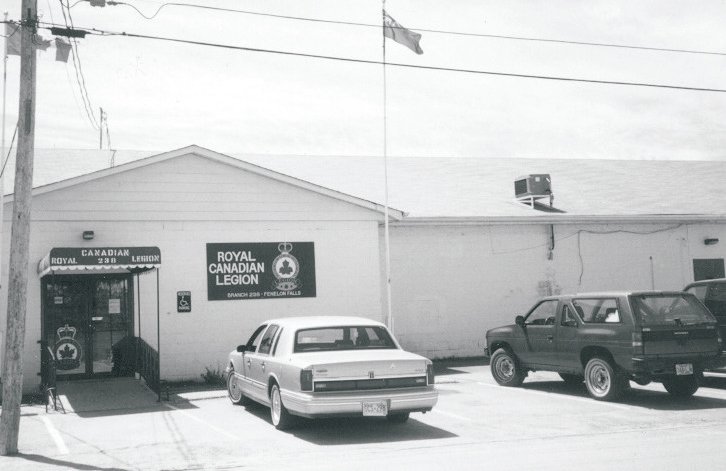 From the Fenelon Falls Tweedsmuir History

There is not much information available about “The Legion” in its local set-up, as fire destroyed all their records in the 1940s when their meetings took place in “Jordan’s Hall”—rooms over the old Burgoyne – Red & White Store, later Dick Mitchell’s, on Colborne Street, midway in the block.

The date of organization was July 1, 1932, and, as memory serves, Charter Members were:

For a time, they met in the “Commission Rooms,” then over Fred Warren’s store and in Jordan’s Hall (as mentioned above). After the fire, a small office building between the bridges, (owned by Thos. Graham, later Elsworth Austin, Insurance Agents) was moved to a vacant lot on Clifton Street south of Francis St. East. The owner, Mark Fell, rented(?) this to the Legion until such time as they purchased the Jewell property on Francis Street West (originally built by the Presbyterian Church around 1875). Being a double house, the east side was rented, while the Legion occupied the west side as a Club Room. Bad luck seemed to “dog” their moves and fire again took its toll. The property was sold to the Liquor Control Board which continues to dispense its products in increasing amounts to area residents. Now, what the Legion hopes will be a permanent move is on the corner of Lindsay and Forest Street [Veteran’s Way]—S/W side of town. This house was built by Felix and Alex Northey, later sold to Eli Worsley and by him to the Burns and the Rowes. In 1969 it has been given a real ‘face-lifting’ with added accommodation for social events, etc. and it is enjoyed regularly by the Senior Citizens group, as well as for all Legion activities.

For some years, veterans from Coboconk, Burnt River and Kinmount met with the local group and our get-togethers alternated in the various localities.

In conjunction with the councils of the Village of Fenelon Falls and Fenelon Township, a fine memorial monument was unveiled on September 2nd, 1934, with Padre Lambert as guest speaker. It was situated on the island between the bridges, but when this area was taken over by the government for park and lock facilities, the Cenotaph was moved to the Market Square, Francis Street West. Over the years, numbers of citizens join the thinning ranks of veterans for a few moments of remembrance on November 11th.

During the summer, a decoration service is held in the cemetery when the white crosses are marked by red poppies, and friends make it a general day of “Say it with flowers.” Music is supplied by the Salvation Army Band and messages given by special speakers. For the past few years Harry Diamond, Chaplain, and Ken Smith, Secretary (President – 1969), have led the services with Norm Miller directing parade ceremonies.

Errors and Omissions excepted (memory dims over the years), Presidents of the Canadian Legion #238 have been:

(Not necessarily in their order of service)

Service of Thanksgiving was held in United Church, May 8th, 1945, the conclusion of the Second World War. “God Grant there may not be another.”

Information for this article was submitted by Alex. Flett, November, 1969. 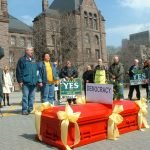 Anne and John Panter Remember the Voices of Central Ontario 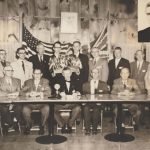