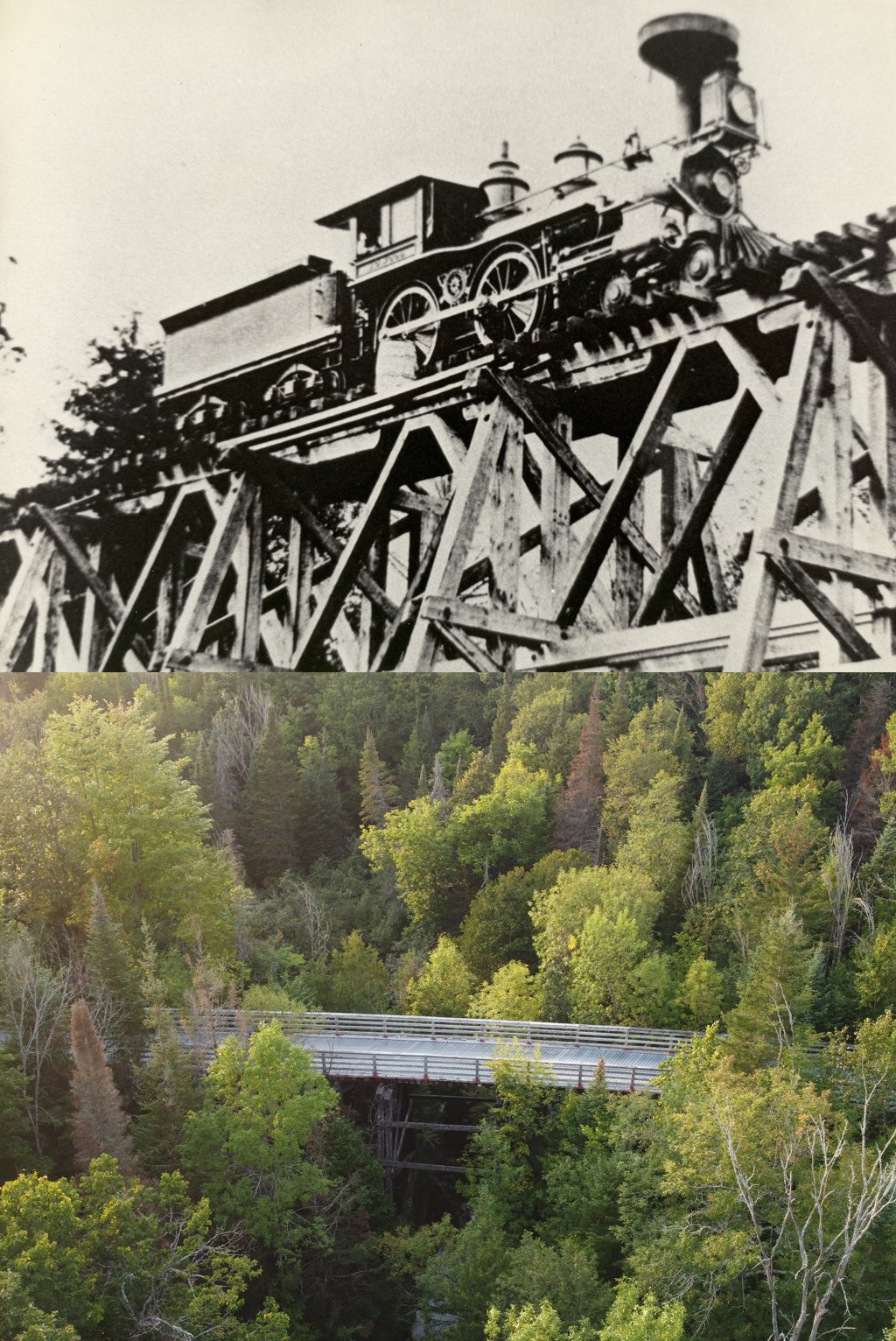 Crego Creek Trestle, circa 1900 and 2021. The Trestle was built by Kinmount's Icelandic Community.

While the first settlers were chopping back the forest in the pioneer settlements of Kinmount in the new province of Ontario, events were happening thousands of miles away that would write another chapter of local history. Tremendous climatic disturbances were rocking the island of Iceland. Violent storms, summer snows, and tremendous volcanic eruptions plagued the northern part of the island for several years. Many Icelanders became fearful and discouraged and decided to immigrate elsewhere. North America was a logical choice. On September 10, 1874, the steamer St. Patrick sailed from Sauoarkrokur, in northern Iceland, with 375 prospective pioneers bound for a new life. This group had intended to proceed from Quebec to the United States, but some smooth talking immigration officers persuaded them to stay in Canada. The new settlers were worried about their personal rights and freedoms in monarchical Canada. However, three pledges were made, in writing, by Canadian officials:

Canadian officials had no difficulties with any of these basic demands.

About the same time as this group of Icelanders reached Canada, the Victoria Railway was looking for labourers. The company had failed to recruit enough labour locally. Somehow the new arrivals were recruited by the Company officials, with government approval, and ear-marked for the Kinmount depot. The new immigrants travelled to Toronto where they boarded the train for the nearest railhead: Coboconk. (Sigtryggur Jonasson was hired as the representative of the Canadian immigration department.) Local residents were hired by the railway company to team the new arrivals from Coboconk over the newly opened Monck Road to their camps at Kinmount. The railway company built five large lumber-style shanties (70 feet by 20 feet) to accommodate the new arrivals. These shanties were spread along the track south of the village. The nearest was located one-half mile south of town and the farthest two and one-half miles south of Kinmount. Their main settlement was called Hayford and was likely located near Crego Creek. The trestle over Crego Creek and surrounding rock cuts were the main operations at the time.

Soon after their arrival in October 1874, a tragedy began to stalk the beleaguered immigrants. A major epidemic of diarrhea and sickness dogged them. A Doctor Fidler was dispatched by the company to check out the situation. In a report of November 7, he reported that sixteen small children had died in the three weeks since their arrival. Two children had died in the one night he spent among them. Dr. Fidler maintained the diarrhea was caused by overcrowded shanties, poor sanitation, bad ventilation, and an unbalanced and strange diet. This report galvanized the railway company into action. A number of officials, including President [George] Laidlaw, paid Hayford a visit. They agreed to overhaul the existing shanties by installing higher roofs with better ventilation, as well as building several more barracks to alleviate overcrowding. The Icelanders were upbraided by Laidlaw for their laziness when only fifty of ninety men showed up for work in any one day. They were also warned to adjust their diet and hygiene. Evidently, the Icelanders were unused to the heavy meat diet they were allotted. Dr. Charles Curry of Minden was assigned to watch over their health. They were promised a school. Sigtryggur Jonasson was to open a store in the town to cater to their needs. William Hartle, Crown Lands Agent, was also assigned to look after their welfare and assist them in settling on farms in the area. Part of the plan to assist the newcomers in becoming permanent settlers was to settle them on free grant lots in Lutterworth and Snowdon. Many Icelanders were anxious to locate on farms in order to plant a spring crop. In the spring of 1875, many Icelanders did actually move to their locations and begin to chop their lots.

The local residents were impressed by the Icelanders. Despite a language gap between the two groups—only Jonasson could speak English—there was some interaction. The Kinmount correspondent for the Lindsay Post wrote:
The Icelanders are getting on favourably and are much liked by the old settlers as they are genial and accommodating.

A further report maintains Kinmount never knew “a more sober, honest and peaceable class of people.” The newcomers were invited to logging bees and were made to feel part of the community. When the Fenelon Falls Gazette attacked the Icelanders as lazy, drunken bums better gone from the area, the local residents rallied to their defence. In the tough times, during the summer of 1875, many local farmers employed the out-of-work immigrants out of sympathy. Curiosity soon gave way to acceptance and relations between the locals and the Icelanders remained cordial down to the end.

A major problem for the new settlers was the language barrier. Only Sigtryggur Jonasson spoke English and the local residents were not famous for their proficiency in Icelandic. Consequently, Jonasson was the interpreter and go-between in dealings with the natives. High on the list of priorities was a school for the new arrivals where they could master English. After several delays a school was set up, during the winter of 1875, with Sigtryggur Jonasson as teacher. The school continued to operate as long as Jonasson was available to teach.

The Icelanders depended upon the railway as their source of income. Normally the work on the line was suspended for the winter months, but the Icelanders were kept working through the winter of 1874-5. Then in March, disaster struck. The Victoria Railway Company ran out of funds and was forced to suspend operations. The Icelanders were thrown out of work. They were suddenly destitute and desperate. After anxiously waiting for the railway construction to begin again, the colony began to dissolve. Many who could afford to, moved away in search of work. Others gallantly took up land and began to clear farms. They hired themselves out to local farmers and tried to make ends meet until work on the railway began again. William Hartle, Crown Lands Agent, helped out as best he could, employing the following Icelanders as road workers in the summer of 1875: Arni Thorlakeson, Jon Johnasson, Ingridi Indridian, Pall Bjarnson, Jason Halderson, Jonathon Halderson, Gisli Gislison and Bjorn Jasuas.

By May 1875, only about thirty-five families—one hundred fifty people—remained at Kinmount. By June a further twelve families had abandoned the area and moved away. By the end July, the remainder had given up hope for work on the railway and drastic action seemed necessary. Employment around Kinmount was scarce. Pioneering was extremely difficult for those Icelanders unused to the peculiarities of the area. Many of the Icelanders had been herdsmen and fishermen back home, a far cry from the shanty/chopping type of farm at Kinmount. The slow dissolution of the colony was a major crisis to the leaders who were determined to have the settlers stick together.

In the hour of the crisis, several persons from different backgrounds rallied to the Icelanders aid. John Taylor, in the service of the British-Canadian Bible Society in 1875, was a missionary among the settlements and the lumber camps of Haliburton. His niece, Caroline, on a visit to the Taylors, happened to pass through Kinmount on her way north. There she saw several Icelanders and became sympathetic to their plight. She reported her brief encounter to her uncle who travelled to Kinmount, became acquainted with the dissatisfied immigrants and agreed to help their cause. In the summer of 1875, Northwest Fever was running unabated through the area, and rumours of the rich and empty lands of Manitoba reached the ears of the Icelandic community. John Taylor went to Ottawa and somehow secured government funds for an advance scouting expedition to the Red River Valley in Manitoba. A May 30, 1875, meeting in Kinmount elected John Taylor as the leader of the expedition and Sigtryggur Jonasson, Einar Jonasson, Skapti Arason, and Kristjan Jonsson as the other members. They left Kinmount on July 2, 1875, and travelled by Wisconsin to the new province of Manitoba. They were very impressed by the territory, the economic potential, the terrain along Lake Winnipeg (which reminded them more of Iceland than the dense forests of Kinmount) and the fact that there was unlimited space to live in a body.

The advance party agreed to recommend the new site and return to Kinmount. The settlers at Kinmount were notified in August to prepare for the move. Only one thing stood in their way: money. John Taylor made an appeal to the government in Ottawa for a grant, but was initially refused. Governor General Lord Dufferin then intervened and the grant was secured. The entire Kinmount group was packed up and trekked to Manitoba. Other small groups and individuals who had left Kinmount earlier were contacted by Sigtryggur Jonasson and invited to the new site. They all agreed to move to the new colony. Icelanders who had previously settled in Wisconsin also joined the Kinmount emigrants. Word was sent back to Iceland and eventually more Icelanders immigrated to Manitoba. The colonists settled on the shores of Lake Winnipeg around what was to become the town of Gimli and their descendants live there to this very day.

The Icelandic settlement at Kinmount was a well meaning idea that failed. It might have succeeded had not work on the Victoria Railway halted for a year. The new immigrants were suffering culture shock and could not acclimatize themselves to hacking a farm out of the Snowdon bush. The lots they abandoned were later occupied by other settlers and successfully farmed. The Icelanders also wanted to remain together in a tight body, and there was just not enough available land at Kinmount to satisfy this desire. Most were destitute and desperately poor when they left Kinmount, and somewhat disillusioned with local back-township economics. Had they stayed, in a few short years they would have seen the local economy boom as the railway brought new economic vitality. Maybe the Kinmount of today would have been graced with such surnames as Jonasson, Gilison, Thorlakeson, and Bjarson. The Icelanders must have felt no grudge against their former friends at Kinmount for they continued to correspond with the locals after their move. One such letter in January 1876, informed their Kinmount friends that the new colony had been established. All they left behind were memories, legends and about thirty unmarked graves of those Icelanders who made Kinmount their final stop. 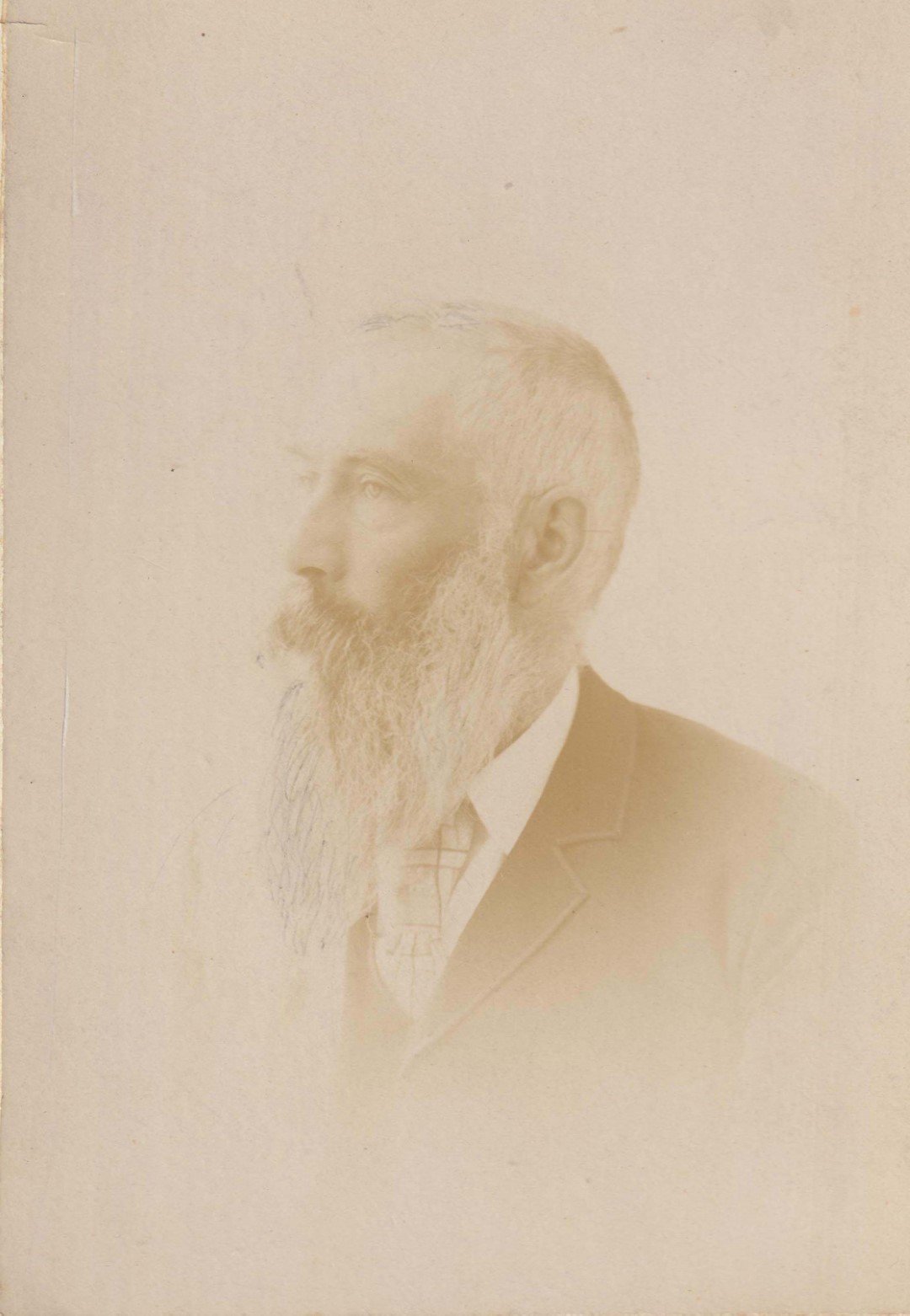 Crego Creek Trestle, circa 1900 and 2021. The Trestle was built by Kinmount's Icelandic Community. 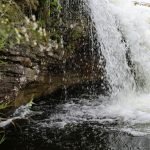 The Natural Bridge Behind Fenelon Falls 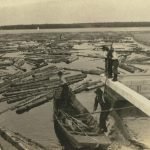