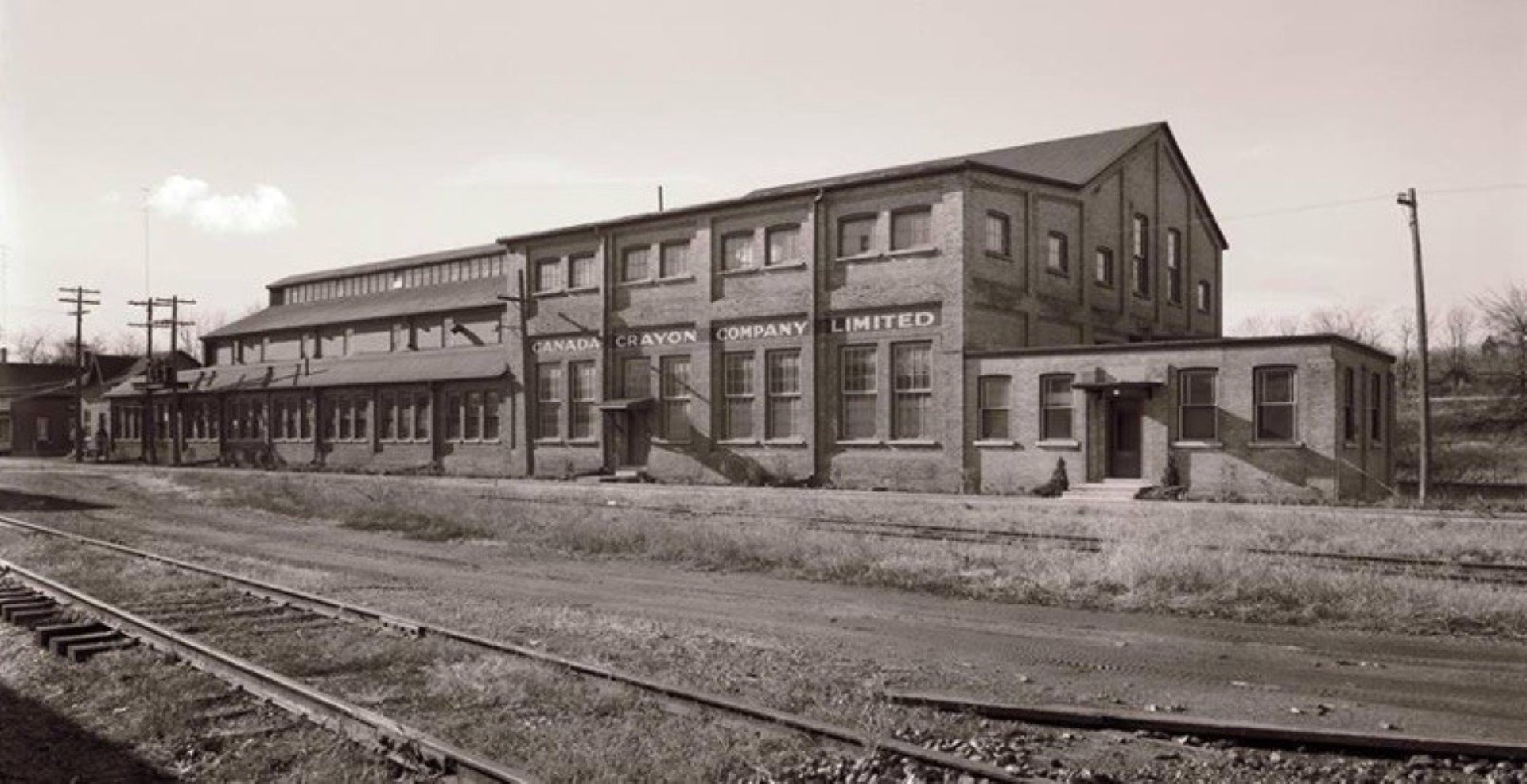 For generations, children around the world have grown up creating wonderful arts and crafts using Crayola products. If you set your mind to it, just about anything can be made using Crayola. As countless families have spent so many hours playing with Crayola, it has become a brand that is nearly universally recognized and loved. It also has deep local roots. Originally operating as the Canada Crayon Company, it has been part of the Kawartha Lakes community since the 1930s.

The Crayola brand was developed by Binney and Smith Company. Cousins Edwin Binney and C. Harold Smith of New York operated a chemical company making products like red iron oxide pigments for barn paint and carbon black chemicals to make tires black. Alice Stead Binney (Edwin’s wife) had been a school teacher and helped imagine dustless chalk and wax crayons. She proposed the name, derived from craie (French for ‘chalk’) and ola (a popular commercial suffix, that also means ‘oily’). Before long they became one of the best known manufacturers of crayons and chalk. From the beginning, the company has prided itself in ensuring that all its products are safe for children—a pioneering role in a society that used all kinds of toxic products, such as lead paint.

Into the early twentieth century, many well-known corporations only operated in one country—multinationals did not yet dominate practically every aspect of consumer life.  While Binney and Smith were consolidating their place in the American market, the Canada Crayon Company was founded in Toronto in 1926.  It soon outgrew its facility there, moved to Peterborough, then Lindsay in 1933. They took over a factory that had originally been home to the Boving Company, located on the east bank of the Scugog River, in what is now Rivera Park. Conveniently, it had a rail line running right in front of the factory.

Within a year of moving to Lindsay, the Canada Crayon Company acquired the rights to manufacture and distribute Crayola products in Canada. However, for their first generation, they primarily produced their own brands. Early names included Radiants and Playtime, but Peacock soon became their best known line of crayons. It made chalk under the brands Swan and Goodhue for domestic use, while Sanigene was manufactured in bulk for schools.

In 1958, the Canada Crayon Company became a wholly owned subsidiary of Binney and Smith. From then on the company primarily produced Crayola products, including their ever popular box of eight crayons. By then Crayola had debuted the 64 colour assortment of crayons. But most kids still found a way to make something wonderful with the 8 colours they had. Initially many of the products were strikingly similar to the ones that had been marketed under different brand names by the Canada Crayon Company. But as the years passed changes were made to the branding and packaging, as the variety of craft supplies multiplied.

In 1965, the company moved from the banks of the Scugog River to 15 Mary Street West. In the years that followed the multinational corporation consolidated its place as the world’s most prominent brand of children’s craft supplies. Acquired by Hallmark in 1984, manufacturing continued in Lindsay for another sixteen years. Lindsay remains the company’s Canadian head office, moving its warehouse to Peterborough in 2016.

After sitting empty for a number of years, the old Canada Crayon Company factory was demolished. Part of the brick façade was saved to furnish two gate posts marking the former site of one of the community’s most famous industries, since transformed into Rivera Park. Today, Crayola plays a bigger role than ever in manufacturing the products that countless families use to have fun together, in the Kawarthas and around the world. While their great grandparents would have felt fortunate to have eight colours of Crayola crayons, today’s kids can play with model magic, fabric markers, clay, sidewalk chalk, bath dropz, glitter markers and STEM science kits. The possibilities of what they can make using Crayola are endless.

Check out the online exhibition: 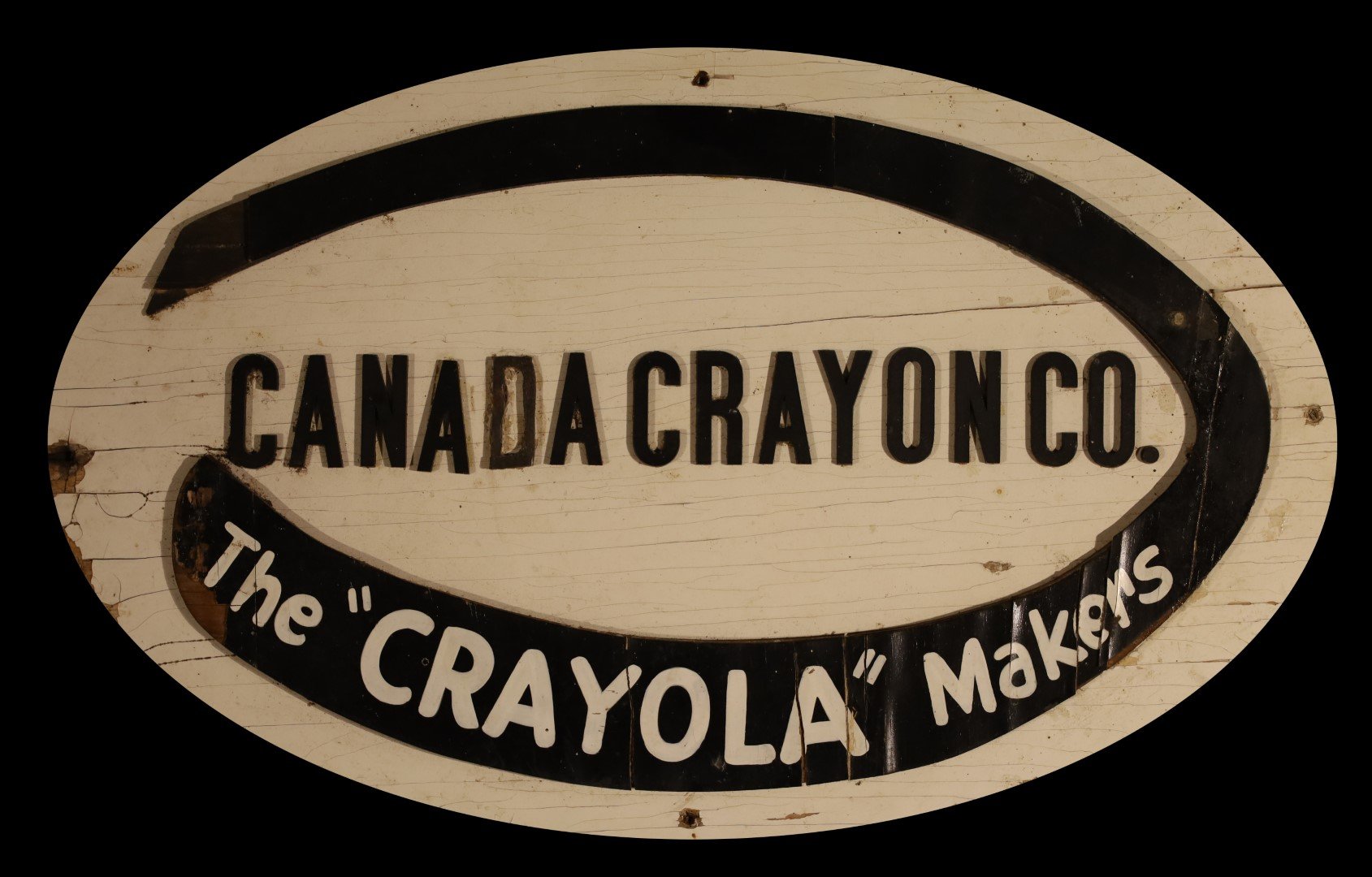 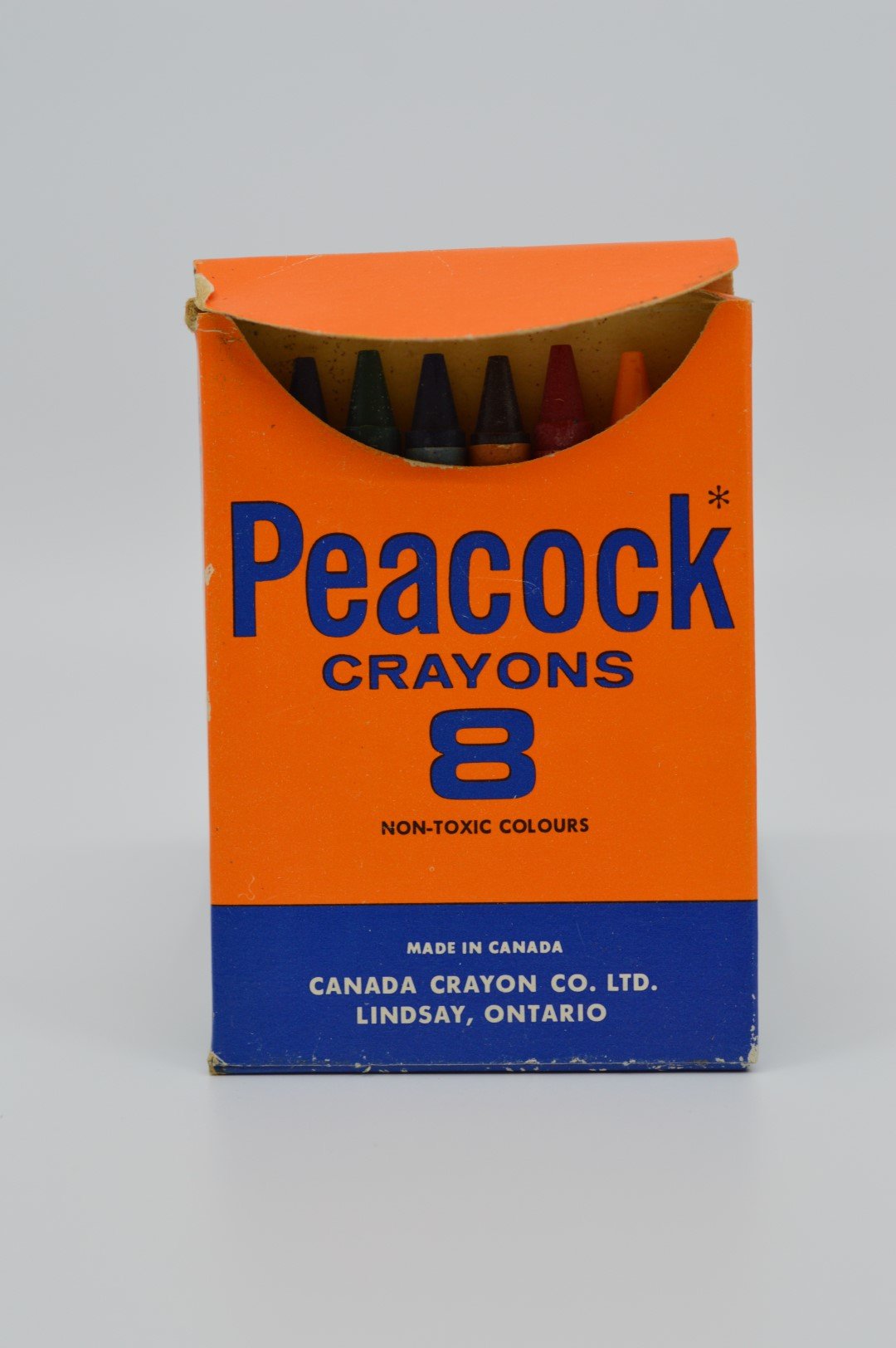 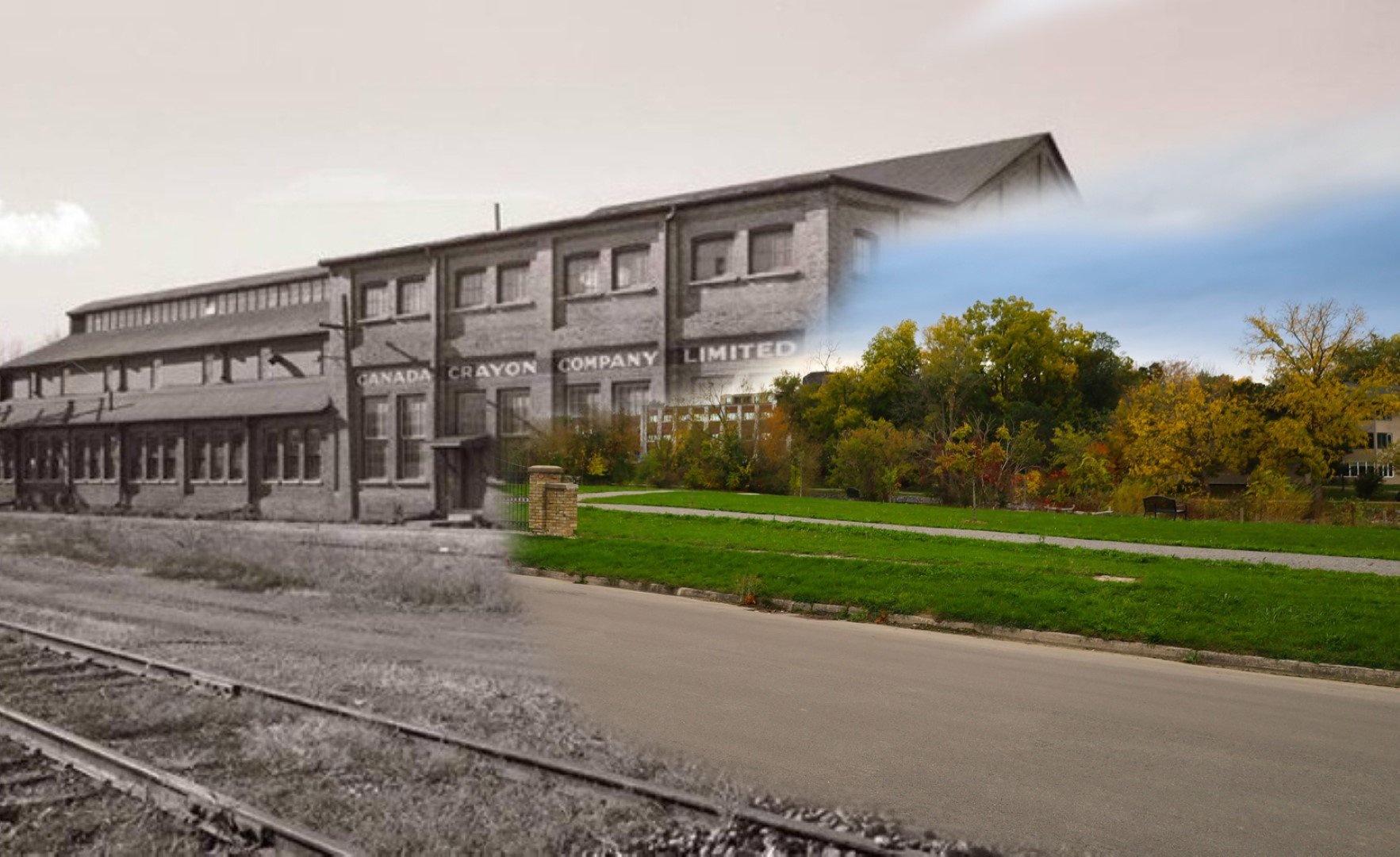 A Canada Crayon Company Crayon, made in Peterborough, before the business moved to Lindsay

A Package of 8 Peacock Crayons, from the Canada Crayon Company

Then and Now: The Former Canada Crayon Company Factory is now Rivera Park. Some of the Brick lives on as the pillars. 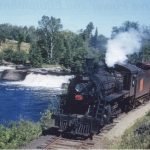 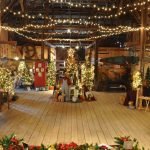