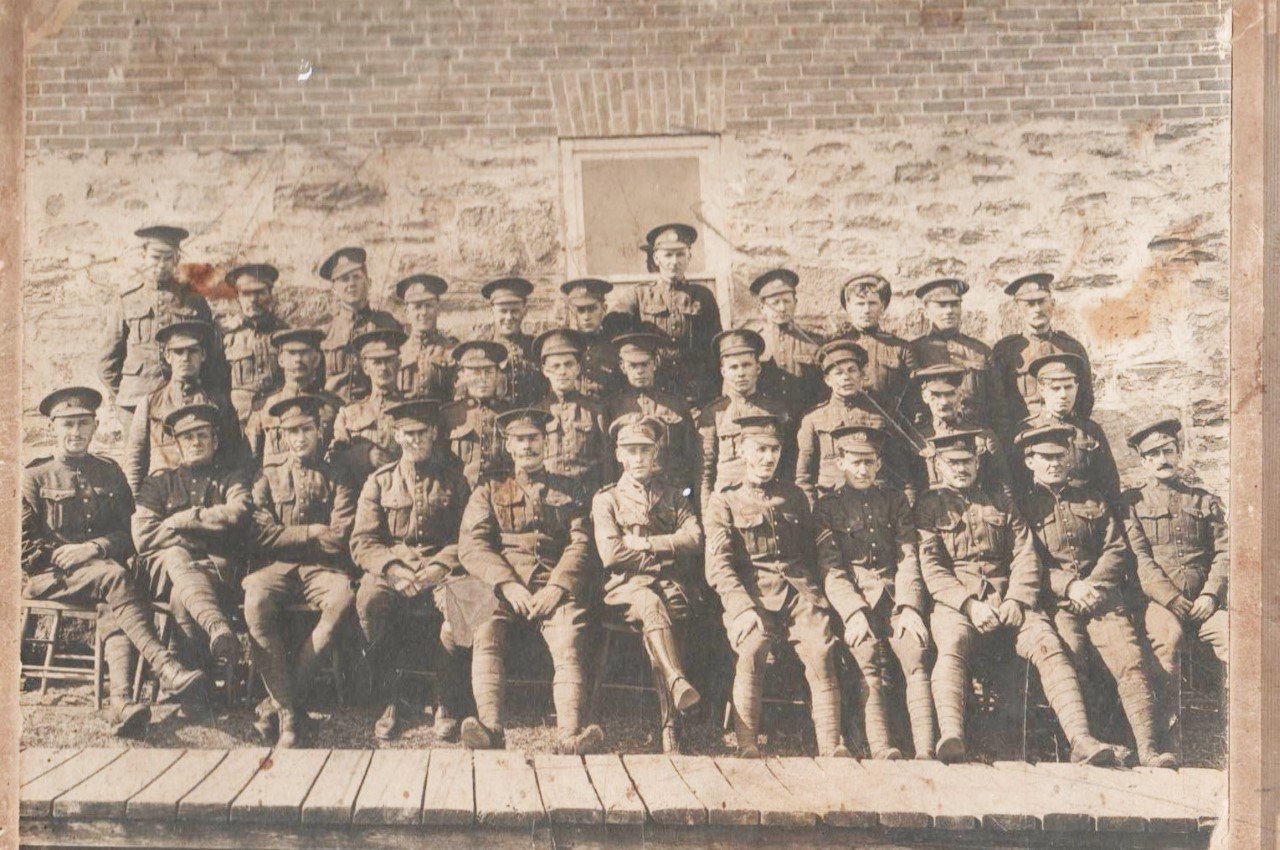 World War I was a “patriotic” war. Canadians rushed to enlist to support “Mother England.” Most Canadians had no idea of the causes fought for, reasons for war or other such stuff. The Government of Canada and the Empire called & they responded.

The first Canadian contingent was mostly existing militia units simply shipped overseas after a brief organizing camp at Val Cartier, Quebec. This was followed by waves of volunteers who rushed to join the colours in 1914 & 1915. At that time, nobody could have predicted the enormous death toll of the war or even its length. Many believed the war would be over by Christmas (1914, not 1918!) and hurried to join the great adventure before it was too late. There was no rush!

By 1915, casualties mounted in France, recruitment declined and the Canadian Overseas Army was facing its first serious manpower shortage. A new recruitment scheme called the ‘Buddies and Chums’ regiments was introduced by the Canadian Government. This scheme used ‘local organizations’ as recruiters under the assumption more men would sign up if they were pressured by people within their own community. Various organizations such as Firefighters, Police, Churches, Unions, Sports Groups and especially communities were challenged to raise a battalion (about 1,000 men) from their groups. It became a matter of civic pride these groups fulfilled their duty to Canada & the Empire and recruited the battalion.

Now the Minister of Defence was none other than the irresponsible MP from Victoria-Haliburton: Sir Sam Hughes. A veteran of the Boer War and a colourful character, Sir Sam had a lot of faults. But one of his strengths was recruiting. He could deliver a ‘stump speech’ that was truly inspiring. Sir Sam challenged his riding to raise a “Buddy & Chums Battalion” and thus was born the 109th Battalion. It was to be called the 109th Overseas Battalion- Victoria and Haliburton, but was dubbed “Sir Sam’s Own” by many.

Victoria & Haliburton Counties were largely rural, but with numerous small towns. To further aid the recruiting process, each village was assigned the task of recruiting a platoon of 36 men. All the small towns, Haliburton, Minden, Gooderham, Norland, Coboconk and Kinmount began their recruiting drive. It became a matter of civic pride that your village fulfilled your quota and filled the ranks. It was embarrassing if you failed! The pressure must have been enormous on local lads of military age! And if you needed ‘help,’ Sir Sam was always there for that big speech!

The Kinmount Platoon of the 109th was in training by early 1916. The Forresters’ Hall was the local barracks, with the soldiers bunked upstairs and a rifle range in the basement. There is something about a man in uniform that turns the young ladies’ heads and no doubt the local heroes paraded about town to catch attention! Kinmount residents were button-bursting proud of their local heroes and the Lindsay Post Kinmount correspondent recorded numerous house parties in honour of the local lads. It all seemed so happy and patriotic in those spring 1916 days. Few realized the horrors that awaited the Kinmount lads in the Flanders mud.

They went to Camp Borden for further training and then shipped out overseas in late 1916. Ironically, the 109th never fought as a unit. In France it was broken up and its men dispersed to other battalions to replace casualties. Most of the 109th was assigned to the 21st Eastern Ontario Battalion. This unit was a militia unit which had been at the front for some time and consequently had suffered enormous casualties. It was said there were more 109th boys in the 21st than there were original soldiers. The Kinmount recruits arrived at the front just in time for the big battle of Vimy Ridge. Many of the names of local lads on the cenotaph were killed at this famous battle.

The return of the survivors in 1919 was a bittersweet time for Kinmount. A “Welcome Home” program was held in the Forresters Hall to honour the local heroes. It was organized by Lieutenant Jim Taylor and Louella Flood (Griffith) and featured a night of classical entertainment the like of which Kinmount had never seen before. Other local residents showed their appreciation in more humble ways with a series of house parties & barn dances. But the world, and Kinmount, was never quite the same. Twenty-one local lads were left in the Flanders mud. Their names, etched on the cenotaph, were all that was left. 1919 was a respite in a changing world. 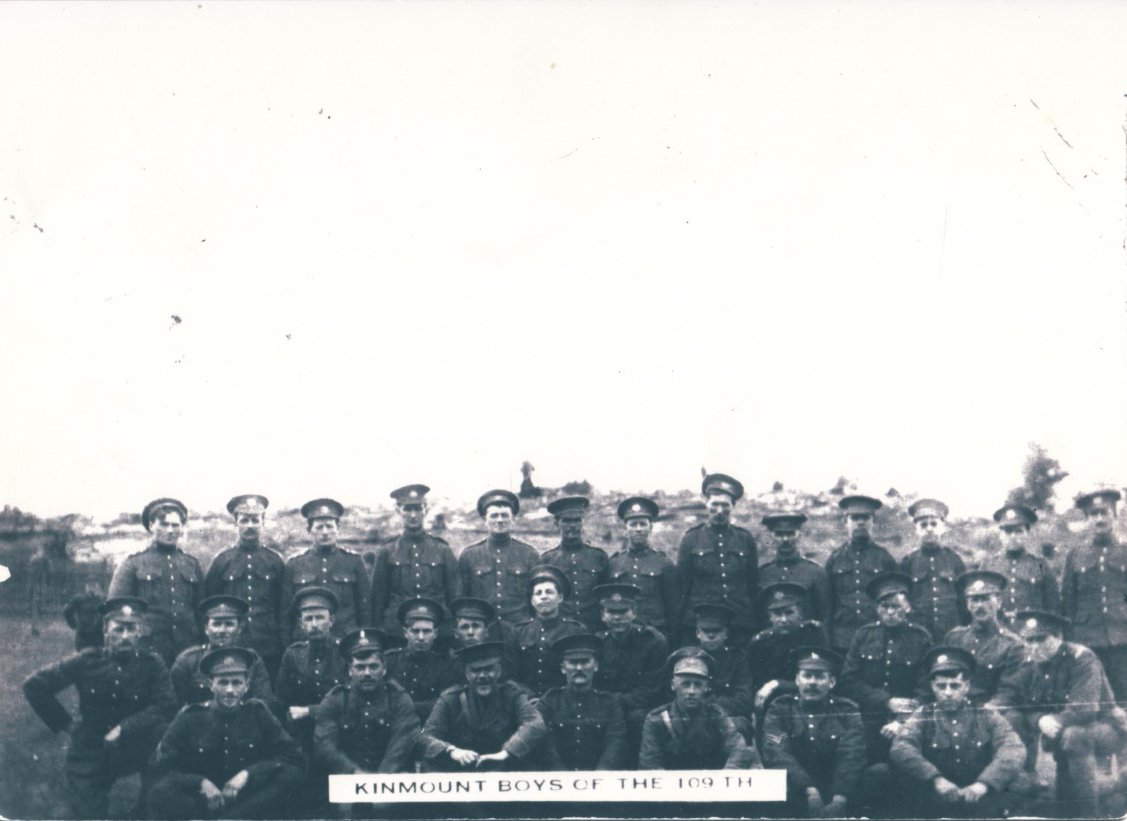 Kinmount Boys of the 109th Battalion 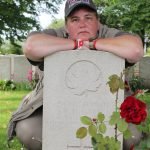 Belinda Wilson Remembers Being the Ontario Delegate on the Royal Canadian Legion Pilgrimage of Remembrance. 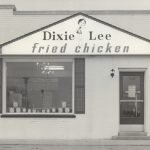