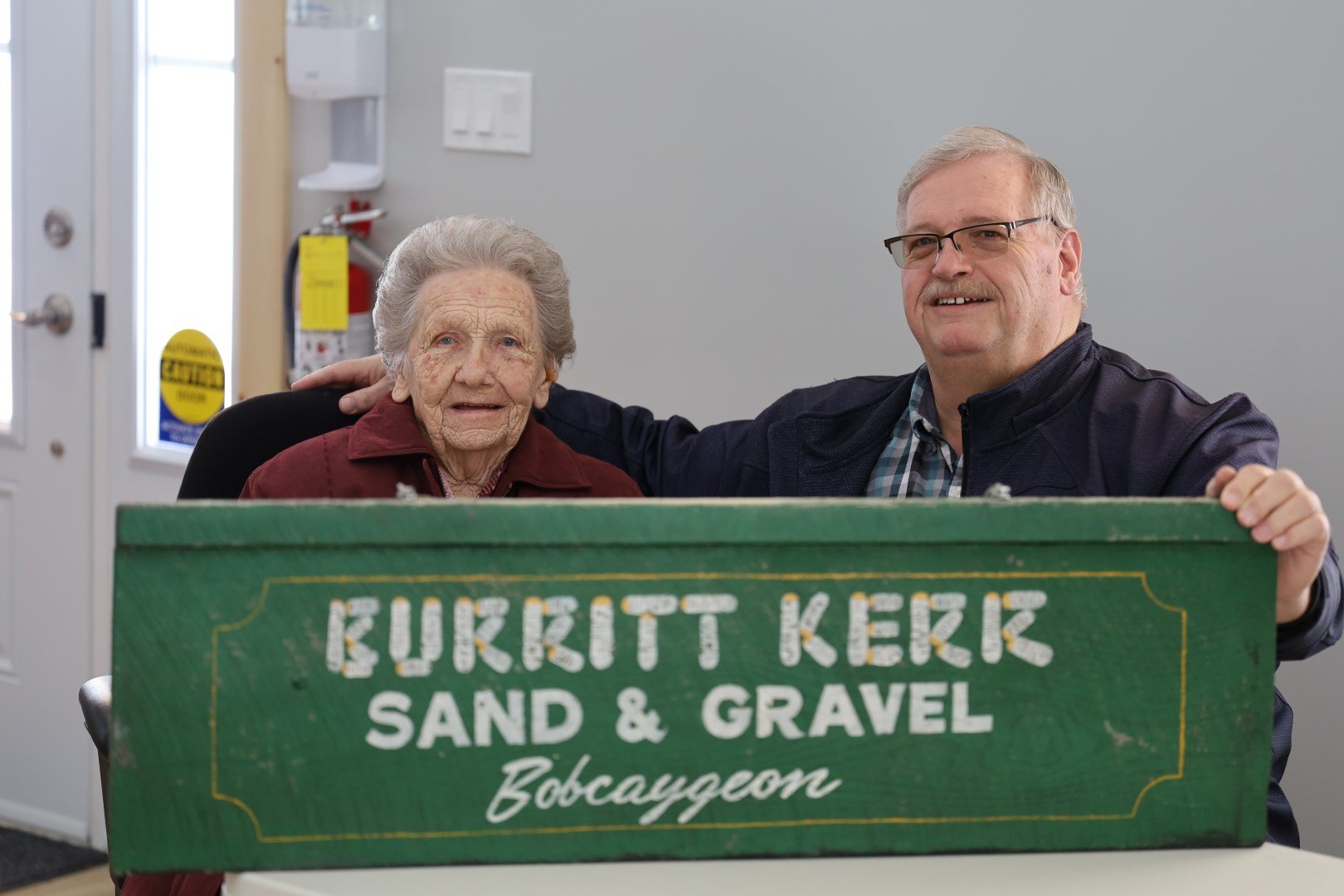 Mildred Kerr and Steve Oliver with the sign off the Kerrs' dump cart, lettered by Forley Schell

Burritt and his father Clayton supplied material for roadwork on Highway 36 with a horse-drawn dump cart… Mildred could still drive a dump truck at the age of 80!

Burritt Kerr (often pronounced “Bert”) grew up in the construction and aggregate business, in the era before there was heavy equipment. His father, Clayton had been working since the early twentieth century, and it was without doubt heavy and hard labour.

All of the aggregate had to be loaded by hand, and until well into the twentieth century stone crushers were not available, so when rocks had to be broken a sledgehammer was the available tool, though much material was just used in its natural state. In the nineteenth century, this was one kind of work that done was at penitentiaries—which, of course, were places to redeem souls through virtues of strenuous manual labour.  Church groups once raised subscriptions to purchase stones that convicts could smash as they inched towards salvation.

But for Clayton and Burritt Kerr it was simply a job that had to be done, because a lot of natural or broken stone was needed for local construction, and both of them spent a lifetime doing the difficult jobs that made life a whole lot easier for everyone else—supplying aggregates, plowing roads, digging graves and collecting garbage. They had the good fortune to be mining a pit that included a lot of natural gravel that saved countless hours of hammer swinging.

The Kerrs’ Pit was between Pigeon Lake Road and Ranch Road, with the access on the west side, just south of Highway 36. One of their many jobs was supplying material for roadwork on the adjacent highway.  Day after day, they would load the horse-drawn dump cart by hand, team it up to the road, and dump roughly where it was needed. Then it would still have to be spread by hand. They, of course, persevered until the job was done.

One day, Burritt brought home a horse-powered scoop to load the material, but his Dad wasn’t sure that the new technology was that much better than the old. The Kerrs’ ability to shovel was legendary. Anyone else would have used a spade to load gravel, but Burritt Kerr used a grain scoop.

It was certainly not an easy childhood, growing up being a human excavator. For his entire adult life Burritt Kerr had back problems, but he never let it slow him down. He wore a corset to provide back support and carried on working practically all day, every day. He did not have a comfortable life.

Burritt really embraced self-reliance with a determination to find a way to overcome practically any problem. When faced with a challenge that most people would get help solve, Burritt had a reputation for declining any and all help that was offered, then finding an ingenious way to solve the problem himself. For instance, if he got stuck, he would wrap a chain around his tire, attach it to a tree, so he could pull himself out of trouble. To lift the hind end of the truck he would place blocks under the tail end of the box, then fully raise it. Using the same trick, he could also slide boards under the tires to be able to drive out of mud. It seemed as though he could invent a way to solve practically any problem—“If a man made it, a man could fix it,” he would often say.

One night while he was plowing snow on Green Bay Road (now Riverside Drive), the clutch failed on his truck, so he walked home and got Mildred out of bed. Mildred worked for Ruth Thompon’s popular Bobcaygeon clothing store by day, but her ability to work alongside her husband as he did the impossible will never be forgotten. She faithfully went with him, and helped him tow the snow plow back home. “I did so many things like that, that one doesn’t stand out.” When he got home he threw a parachute over it to keep the snow off, then put a timber through the cab of the truck that he used to hoist out the transmission to service it. Burritt and Mildred got the truck back on the road, and the next day Burritt was plowing snow. They could not let their community down.

Mildred often drove the Model B dump truck for deliveries when Burritt was otherwise occupied. She was not only a great help to her husband personally, but her brother-in-law (Bob Thompson) owned the village’s first stone crusher. Living every day of his life with the painful reminders of the physical costs that came with his job, when heavy equipment became available, Burritt embraced it. In 1958, he bought an International Backhoe, that dug the holes at the Verulam Cemetery for 50 years. He is well remembered for his 4-wheel-drive army truck, fitted up with a one-way plow and a wing. For many years, the Kerrs plowed Bobcaygeon’s streets, working all night when necessary, and also trucked snow from the downtown. Clayton and Burritt collected the garbage in Bobcaygeon. One would drive the truck, while the other walked along throwing the bags up into the dump box. He would deliver a load of gravel for just $3.

For all the work they did over the years, Mildred and Burritt knew how to have fun, and were beloved characters in their community. They were vivacious, energetic, always seemed to be happy and took the time enjoy a story. They travelled far and wide in “Black Beauty,” their Ford Deluxe Car, fitted up with a siren—just for the fun of having a siren. They were among the first locals to buy a snowmobile and went on many memorable journeys. If the garage door was open, it meant that Burritt was home, and friends would stop in for “communion.” Sometimes communion was held several times a day. Out by the sidewalk at their Joseph Street home there was an unforgettable sign, a white cross made from steel fence posts, chained down because everyone kept trying to lift it: “Here lies last dog that messed on my lawn!”

Practically every year both Burritt and Mildred both put floats in the Bobcaygeon Fair Parade—and people never knew what surprise they had in store. Burritt dreamed up his first float when he was 14, taking the dump cart and his ox, Hansom Kerr. Later on, Burritt had modified a cutter so that it was self-propelled using a lawn-mower, inventing a system of brakes, so it could be steered like a skid-steer. He cut out wooden reindeer that were suspended in front. Another parade featured the 1948 Ford “Black Beauty,” with dummies sitting (“the kids”) in the back seat. Bobcaygeon residents will long remember the sight of Mildred driving a dump truck in the parade at the age of 80.

Burritt was a jokester, an entertainer around town. He loved to make inspiring pieces of 3-D art and brain teasers out of junk—he got a lot of the material as he collected the village’s trash. He took propane cylinders and fashioned them into people. He was well remembered for a puzzle made of two horseshoes chained together with a ring to remove. He made many chairs from tractor seats, and fashioned hames into cup or ashtray holders. One year, the Boyd Museum featured his art as an exhibition. He was, of course, happy to take part.

Burritt’s good friend Jeff Crowe remembers that if he ever said the world’s gone crazy, Burritt would simply reply, “No, no it hasn’t, it’s just the people.”

Burritt Kerr’s Dump Cart is on exhibition in the Murphy Barn at Kawartha Settlers Village. They reopen for the season in May, and it’s well worth the trip to see this priceless artifact of Bobcaygeon’s history and enjoy all of the cultural activities on offer at the village. For more information, check out: https://www.settlersvillage.org/ 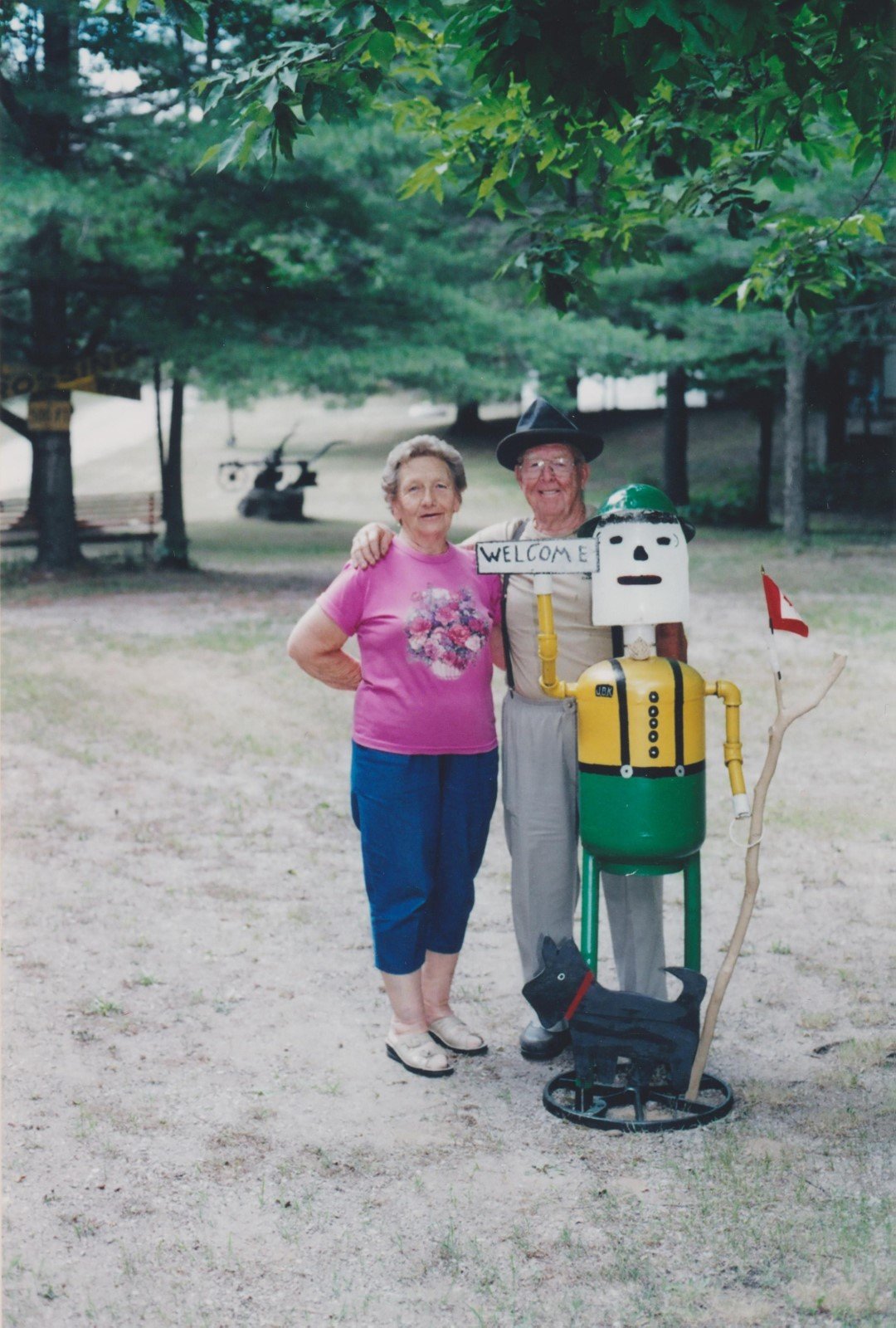 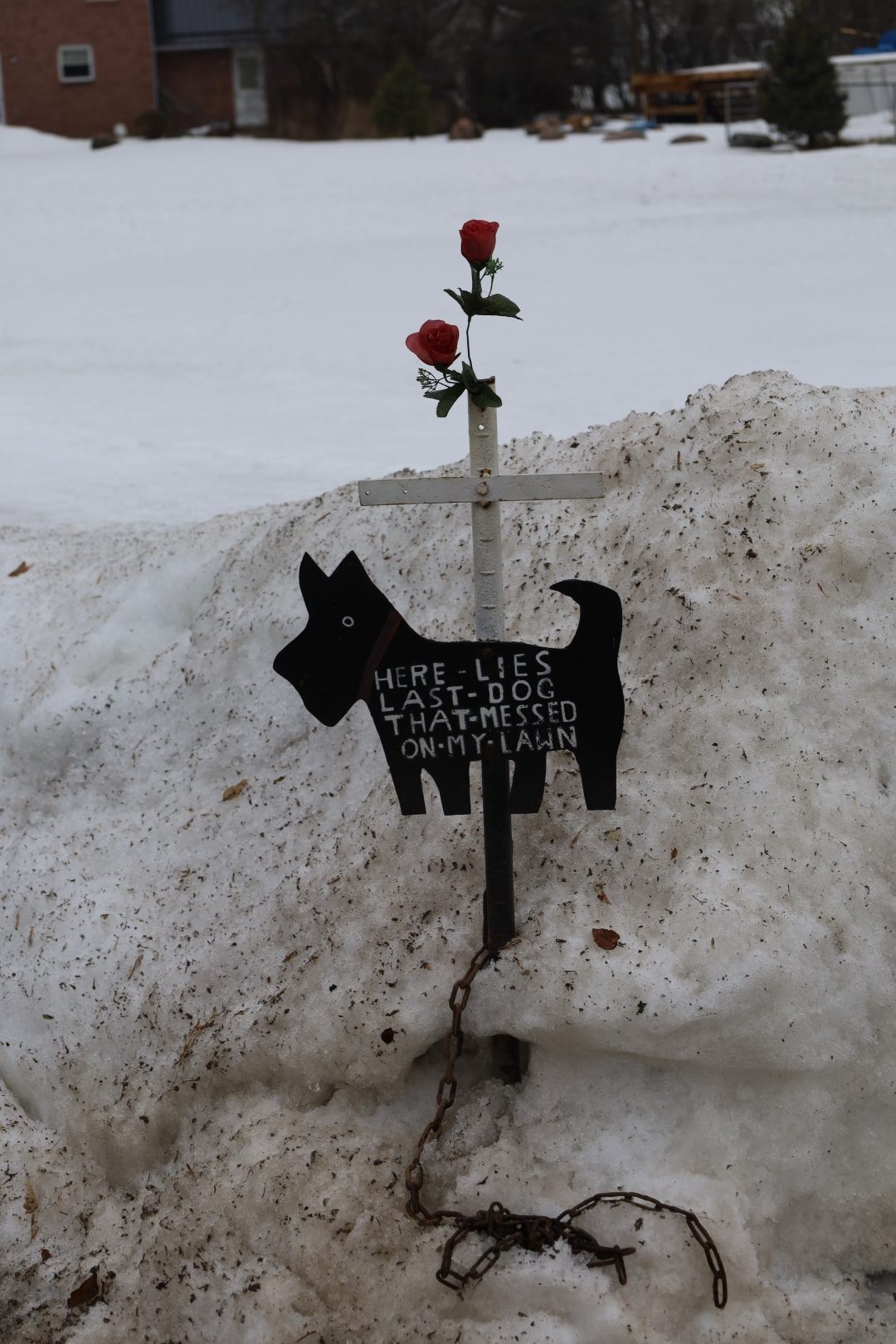 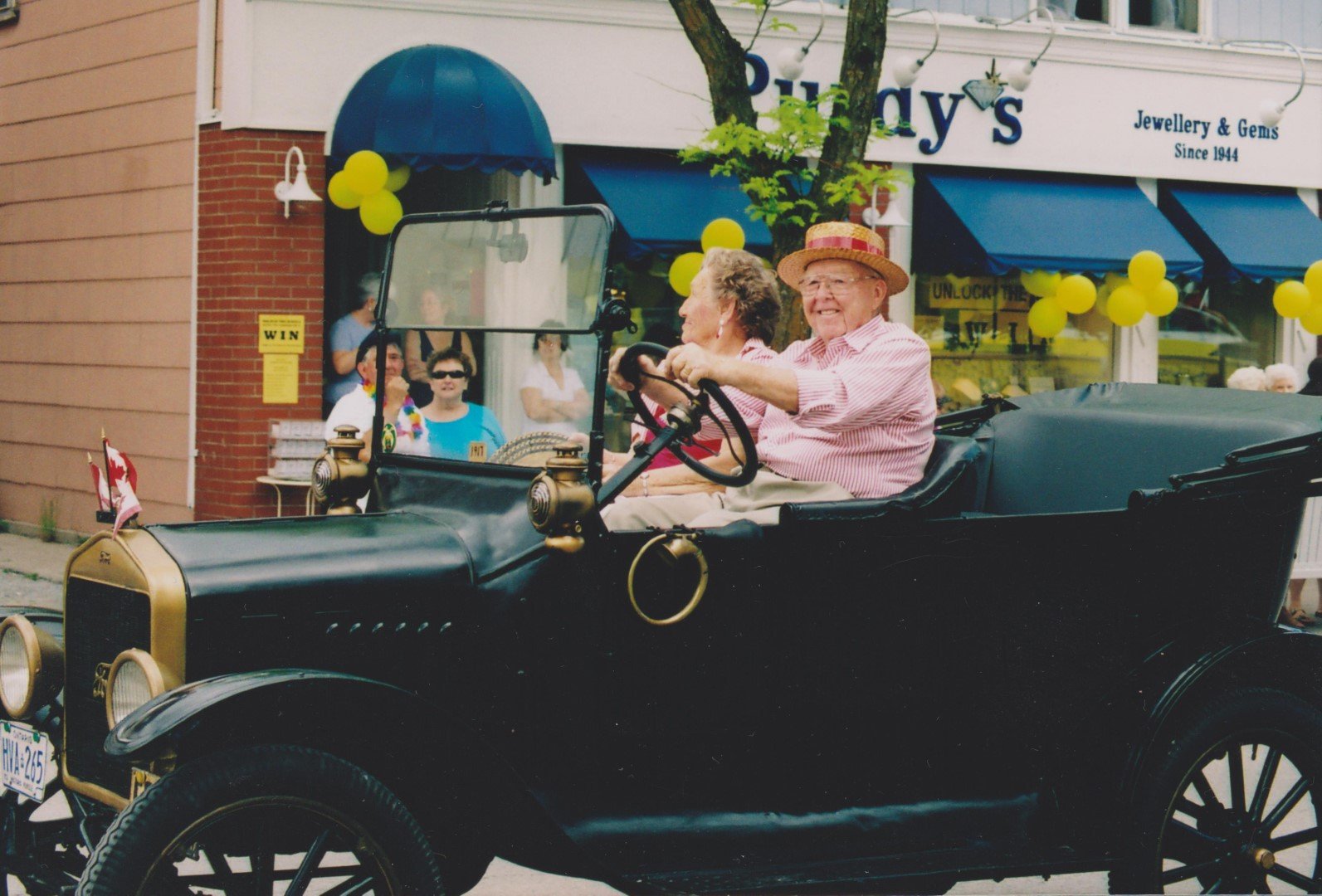 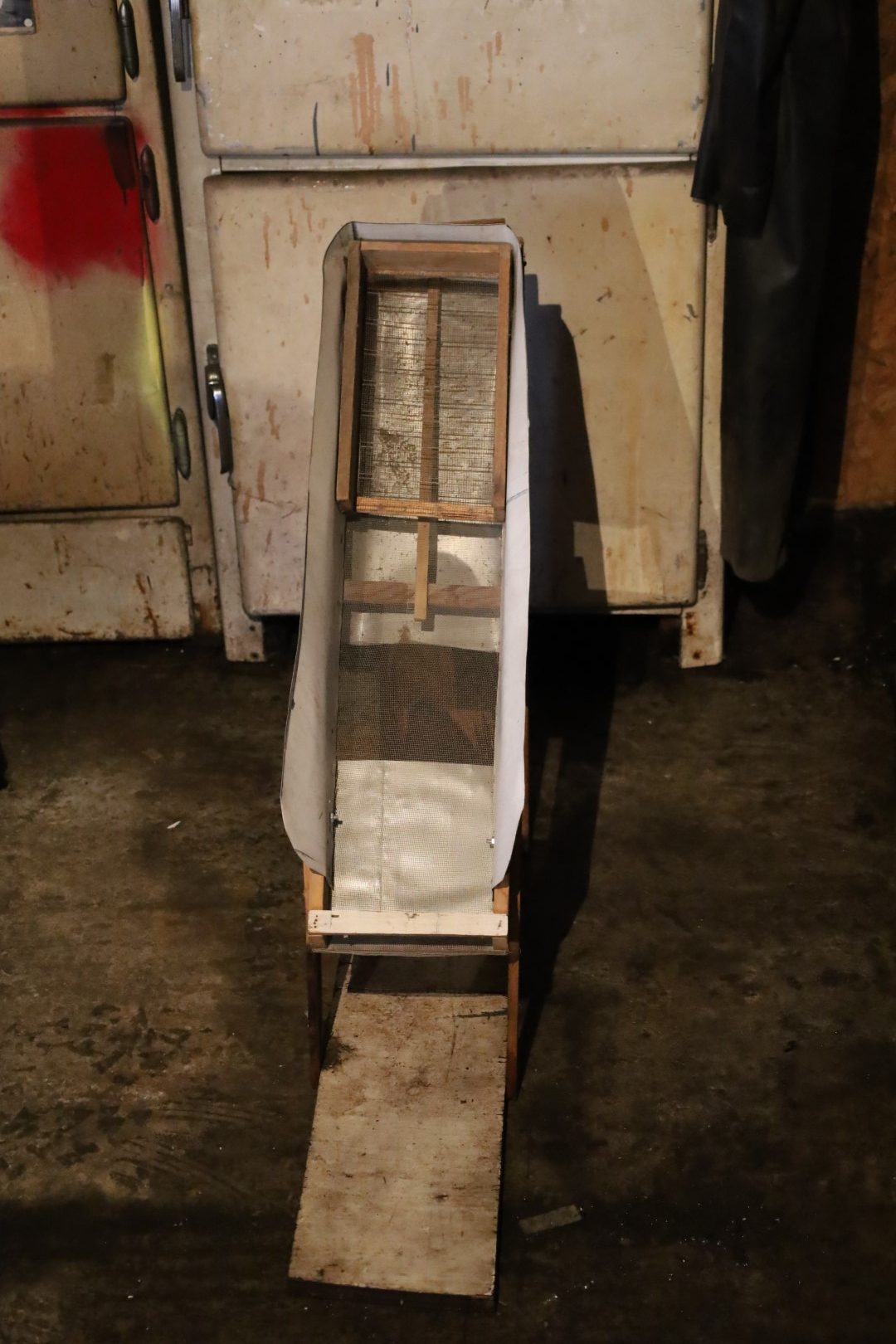 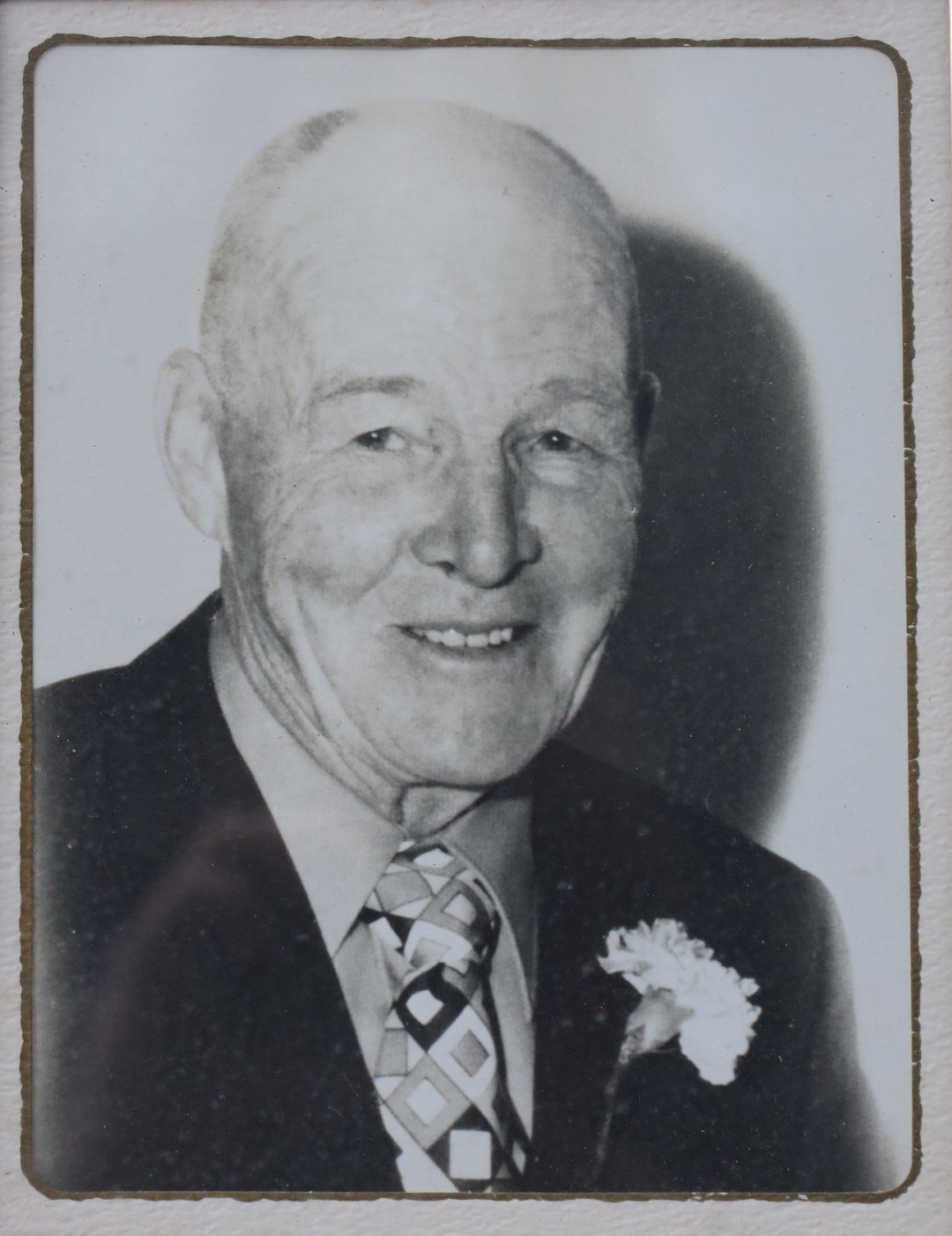 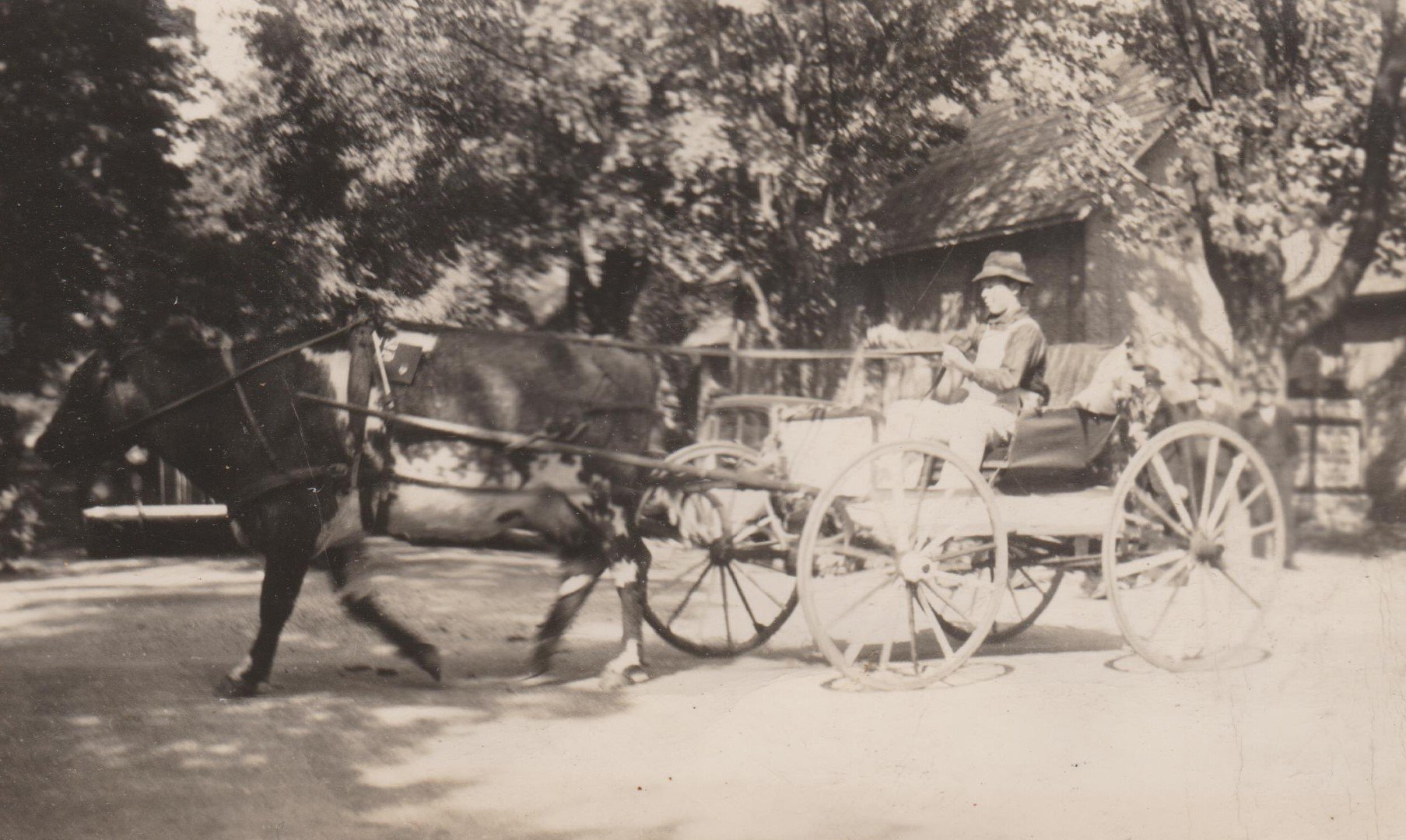 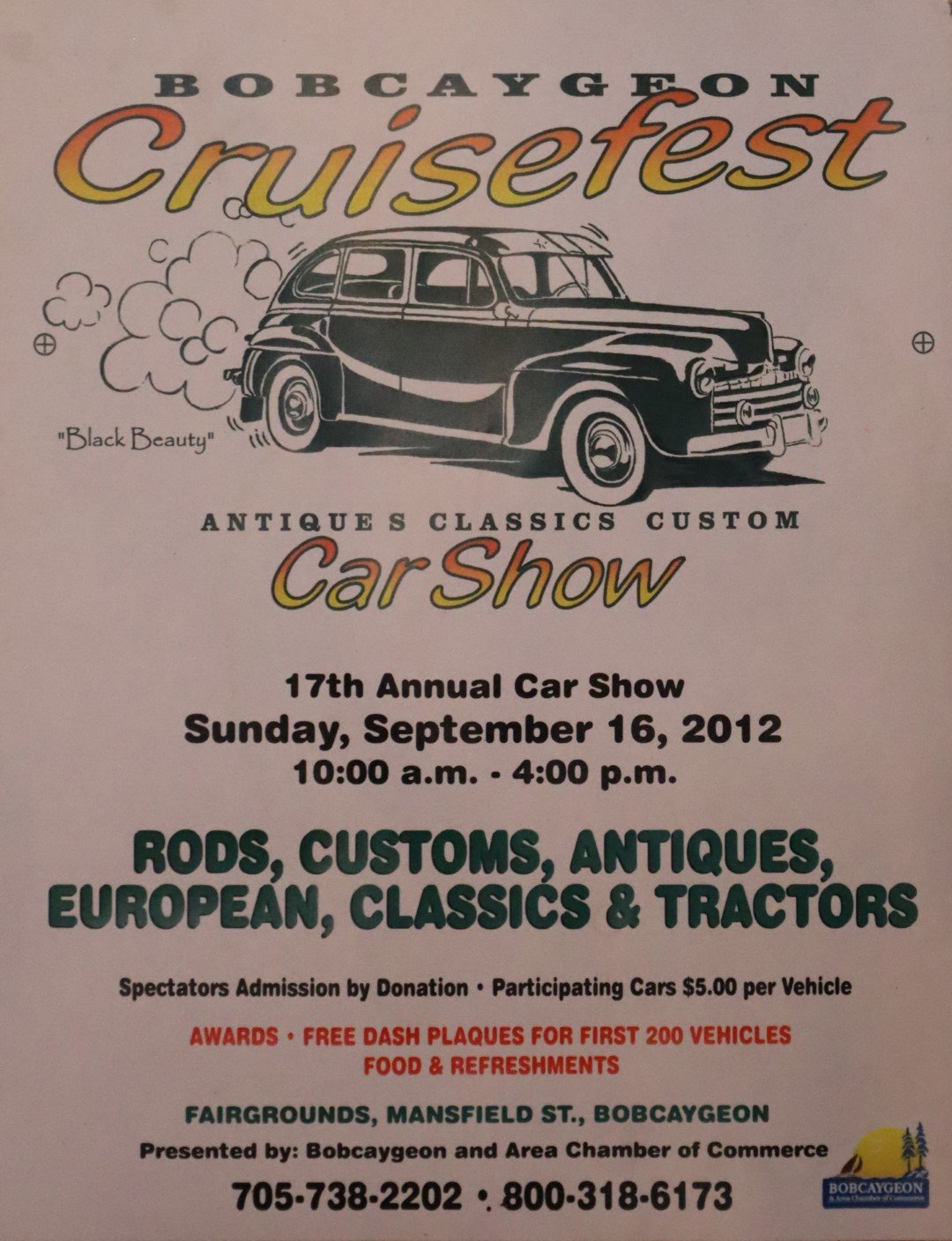 Mildred and Burritt Kerr with his Welcome Sign Man

Burritt's famous sign, "Here Lies Last Dog that Messed on my Lawn!" It was chained down because people kept trying to lift it.

Bruce Hobley's Photograph of Burritt and Mildred Kerr in the Bobcaygeon Parade, June 7, 2008

Burritt's screener for brick sand... it was a laborious process

Burritt and Hansom Kerr in the 1941 Fair Parade

Black Beauty, the Kerrs' famous car, featured on the poster for Cruisefest

Mildred Kerr and Steve Oliver with the sign off the Kerrs' dump cart, lettered by Forley Schell 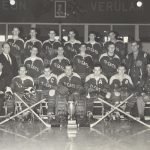 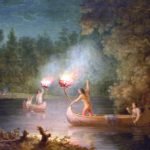