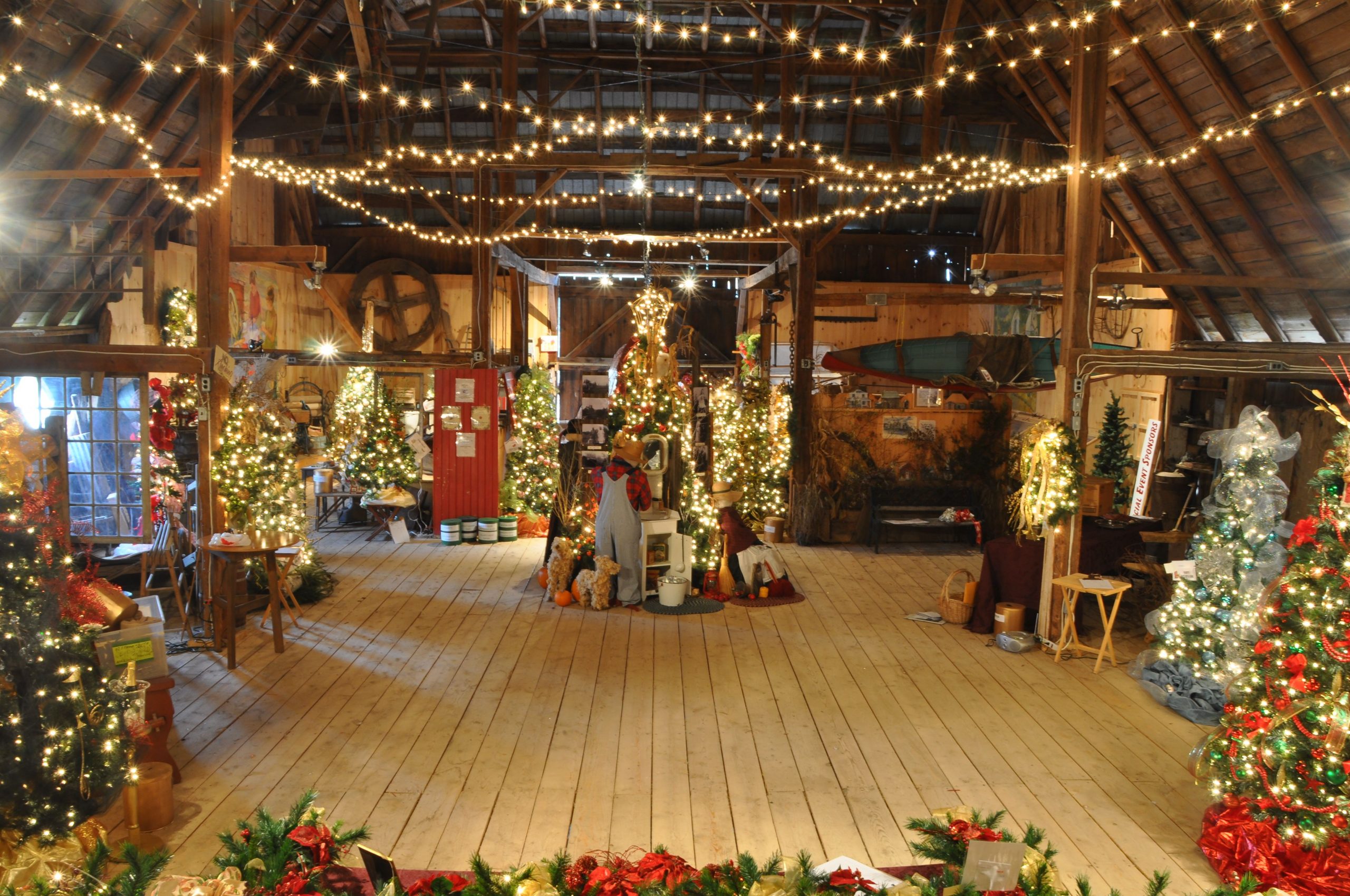 The Festival of Trees in the Murphy Barn, 2011

In 1997, Kawartha Settlers Village was a young, but vibrant and rapidly expanding community organization. Just seven years earlier, Bobcaygeon council had agreed in principle to grant the old Murphy Farm, seized in 1979 for non-payment of taxes, to create an arts and heritage organization situated in a pioneer village. In the years that followed, the volunteers found a way to fundraise enough money to rapidly expand the village. Many locals regularly came to share their interests in history, art, quilting and wood carving. Because of the care and devotion of everyone involved, for many people, it became the place to enjoy spending happy times together.

The volunteers of Settlers Village showed remarkable devotion in finding creative ways to build a cultural space for their community. In its early years, the site was staffed by volunteers, assisted by summer students that could be hired on grants. The volunteers assembled and sold countless packages of Settlers Soup—invented by Kathy MacLean and Mary Sheffield. They hosted many spaghetti dinners. For an organization that had no core government financial support, in just a few years Settlers Village became one of the most beloved cultural organizations in the Kawarthas.

Of all the fundraisers they came up with Settlers Soup has long been a significant revenue source made from ingredients that they purchased at Burn’s Bulk Food. A team of 5 or 6 volunteer ladies assemble the packages. “I was here one day in January,” Al Ingram explains. “I answered the phone in the office. The Lady on the other end said ‘I’m sure glad you are open (which we weren’t) because my father is on his death bead and the one thing he wants is Settlers Soup.’ Of course we did what we could to help.” Demand for the soup continues to be strong.

In 1997, the Lung Association approached Settlers Village with an idea for a fundraiser that would support their local operations, a festival of trees. Volunteers decorated trees and wreaths with all proceeds supporting the two charities. Being a fresh new community event, with the historic backdrop of local nineteenth century buildings lovingly preserved, it had the feel of an old-fashioned Christmas.

Even in its first year there was a lot of interest in the event, and many people wanted to support it, including the Fenelon Falls Secondary School Music Department. Led by Ms. Sandra Van Barr, the String Ensemble came to provide background music in the Murphy Barn, as visitors viewed the beautifully decorated trees. I was one of the cellists there that evening, and our hands were freezing. Many of us were just learning how to play the instruments, and as we were trying to play the Christmas carols, you could hear the pitch of the strings dropping as the tuning pegs let go, even in playing a single note. During the pieces, we had to retune the instruments constantly, and we weren’t great players to begin with. I’m sure it sounded terrible to the audience. Never again did we play in freezing temperatures.

The FFSS String Ensemble was the first of many activities over the years to come and go. But the concept that was pioneered by the Lung Association provided the nucleus for a wonderful community event. Twenty-five years later, community volunteers are decorating 30 to 40 beautiful trees to be presented at the festival. In the first year, there were only about 6 or 8 trees. Over the years it has grown into being a festival with so much more.

“Andrée and I came to Bobcaygeon in 1998,” remembers Bruce Hobley. “That fall, Len Harfield conscripted us one day when we were sitting in Tim Hortons.” Len has been a very devoted volunteer for many years, who headed up the art group at Settlers Village, and he personally decorated many of the trees. “In my first year, there were two girls from the Lung Association volunteering, and they gave us a cheque at the end of the event. They told us they were leaving and that we could look after the Festival of Trees ourselves.”

Shane MacLean was the president of Settlers Village at the time. While at the beginning, the Lung Association had spearheaded the event, as time passed, it became clear that Settlers Village’s own volunteers were far more interested. As the original Lung Association volunteers moved on, and were replaced by others who did not share their enthusiasm, the people who were actually decorating the trees became frustrated with the arrangements, so a change became necessary.

Al Ingram, then a new board member remembers that “Shane sent us a message that we were going to part with the Lung Association, because we didn’t need them. I felt that there was some political risk to part company with the Lung association.” But Settlers Village would move ahead on their own with the Festival, and it soon became apparent that they had plenty of enthusiastic volunteers.

Ruth Anne Wilson soon became an indispensable part of the event, organizing it out of Henderson House. “She would line up sponsors,” Bonnie Murray explains, “writing it all out on a piece of lined paper. She nailed these to the wall over in the Murphy Barn, specifying that one wanted a five-foot tree, another a six and so on. And that laid out what we had to put together. In the beginning, the event was all about seeing the beautiful trees in the historic buildings. We did not have the animals and everything else that is part of the event today.”

With Settlers Village’s first president Anne Cleland organizing the event, with Lynn Webb and Joyce Poole joining Ruth Anne decorating trees, the Festival of Trees was in good hands. Andrée put together a package that she sent out to secure sponsors, sending it to what seemed like everybody in town. “Back then we had to work to get people to participate,” Bruce says. “Now they really want to be part of it.”

In the early days of the Festival of Trees, Santa would just drop by for a couple of hours on Saturday Morning. Jerry Weselink would get dressed up at home, and Linda would bring him in by car, and he would just walk into the venue. Since then, there are many more Santas who change upstairs in Henderson House. “When they were looking to have Santa throughout the event,” Dan Jackson recalls, “I put up my hand and said I would be a Santa. I had several grandkids, so I ended up being Santa for them…. My oldest grandson recognized me, I knew it because he had this smirk on his face, but he didn’t let on and spoil it for the others. Then later on I became Grandpa Claus. One of my granddaughters was terrified of me, and wouldn’t come sit on my lap. Some children run up and jump on your lap, others no.”

For many years, the Festival of Trees included a meal, true to the village’s long-standing traditions in fundraising. There was a children’s pancake breakfast on Saturday morning. They tried a luncheon, “then we switched to a dinner,” Andrée recalls. “The first time it was just ham and scalloped potatoes, then it became roast beef. After a while people start to ask if we could do something different.” And so the Festival of Trees evolved again. “It meant that the volunteers who were tired from doing all that cooking were free to do something else.”

For many years, the Secret Santa Shop was a much-loved part of the event. “There was a rear section in the carriage house that we could section off as its own area. We purchased items of a small dollar amount—dollar store goods. Kids could go in with one of our volunteers, and pick out a tie for dad, scarf for mom. Kids would be excited about giving gifts, it empowered them to be able to do their Christmas shopping.” Initially they were parcelled into brown lunch bags with red tissue paper and a Santa Stamp. Later the Village’s volunteers started wrapping the presents. 2022 will be the first year without the Secret Santa Shop, instead kids can pick presents in the back of the General Store—it’s not entirely gone, just evolving. A special candy shop is being created in the Kimble House.

Though the festival has always involved decorating trees, out of necessity the village has come up with a great many expedients for storing and decorating them. It’s often cold outside when the trees need to be decorated, and it is quite the undertaking. Work on the Festival of Trees often begins in September. “One year we put up plastic in the barn and put the heaters on, so they could be warm while the were working,” Al remembers. The volunteers built a loft in the carriage house to store the decorations and trees. After years of carrying decorations around, it was a godsend when they acquired green yard wagons to haul all the stuff. “When we started out,” Andrée recalls, “we were reusing Christmas lights and spent a lot of time trying to figure out how to get them going. Now we can just buy new Christmas lights.

For years, Joyce Poole did a great job of putting together toy land. She made tall wooden soldiers out of cardboard, used as a backdrop for Santa Claus and his sleigh in the Drive Shed. Every year volunteers made a puzzle of Santa as a decoration. They had a carriage for toy donations to support the Kinsman Club. One long-standing tradition is to auction off a tree for charity—this year the proceeds go to the Food Bank. Jardine Funeral Home founded the memorial tree, decorated with ornaments in memory of a loved one. At the end of the festival the family can take it home to hang on their tree.

One new activity that has really caught on is the live auction. “It a major draw, some people come just for it and it is the Saturday night highlight,” Al explains. “The streets are lined both ways for miles.” Today the Festival of trees also includes a silent auction, raffle, candy shop, wagon rides, live reindeer and children’s crafts.

The Festival of Trees is an event that has just kept growing. About 10 years ago, it really started to take off. Social media has helped the event to reach many new people. Today it has expanded to the point that it produces a majority of the revenues that fund Kawartha Settlers Village. “The Festival of Trees has allowed us to have staff,” Al observes. With over 300 volunteers doing their part and nearly 6,000 attendees in 2019, the Festival of Trees has become a holiday tradition in the Kawarthas, that so many people enjoy, and that makes it possible for Settlers Village to share so much with their community for the rest of their operating season. 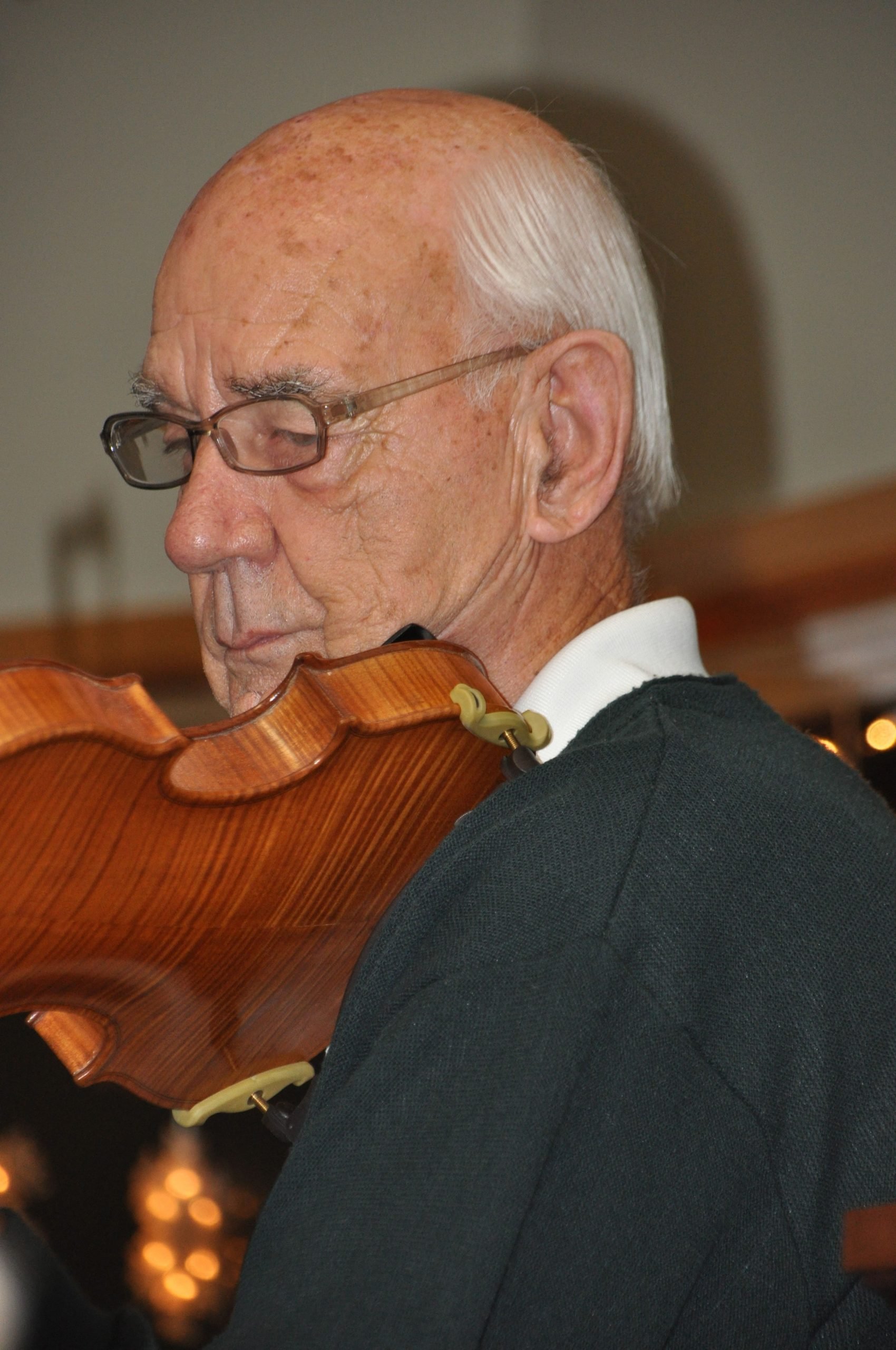 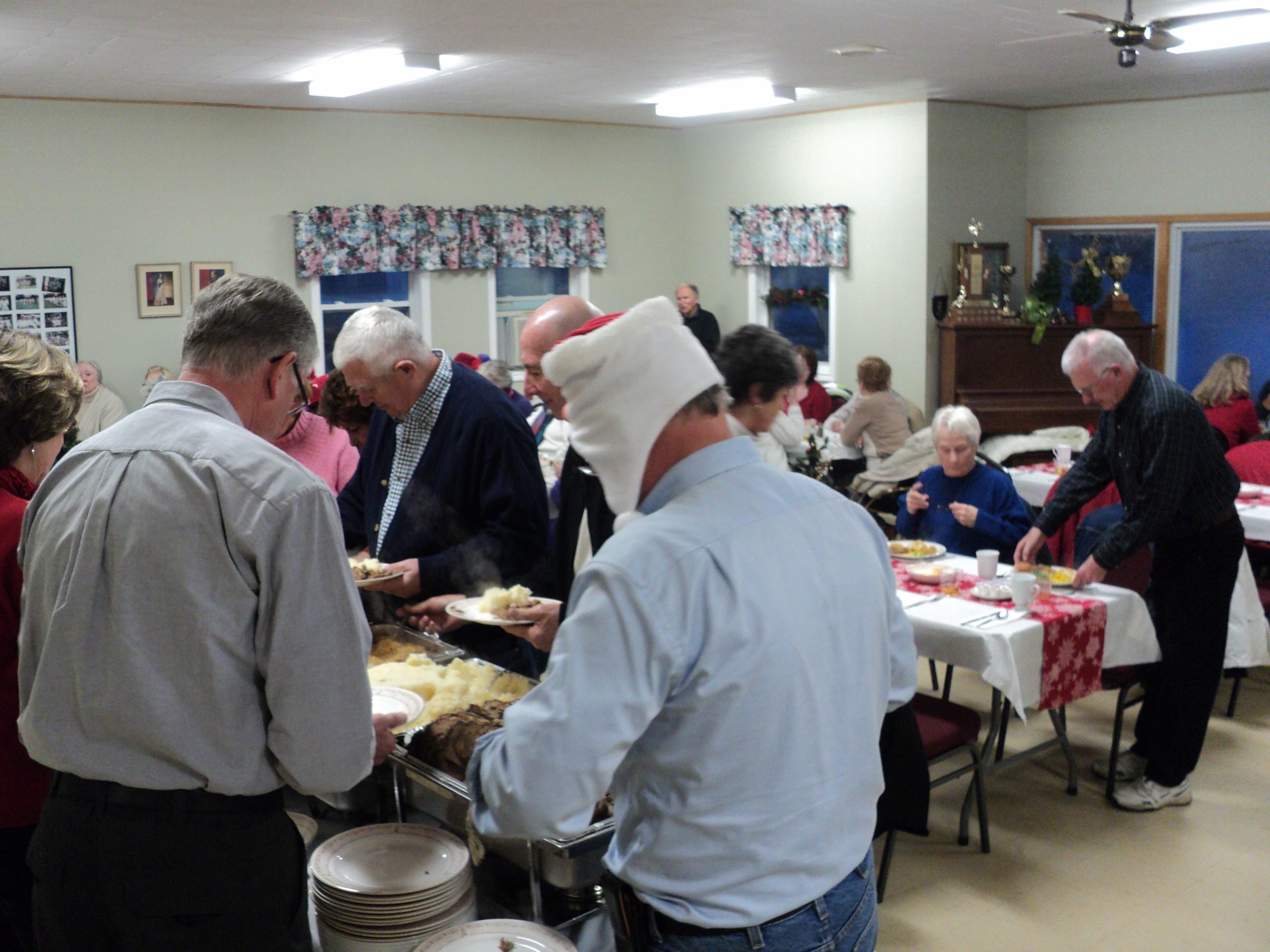 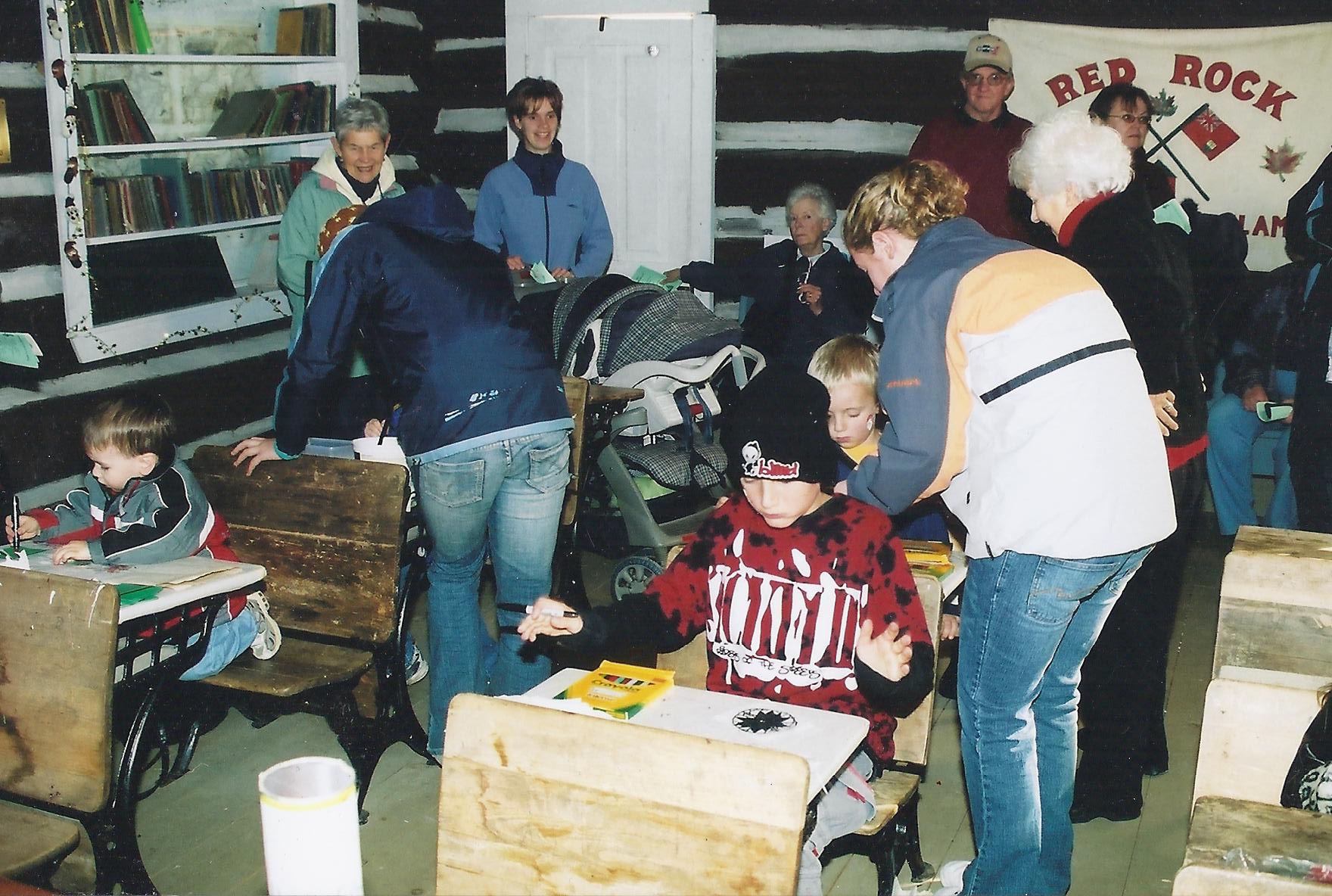 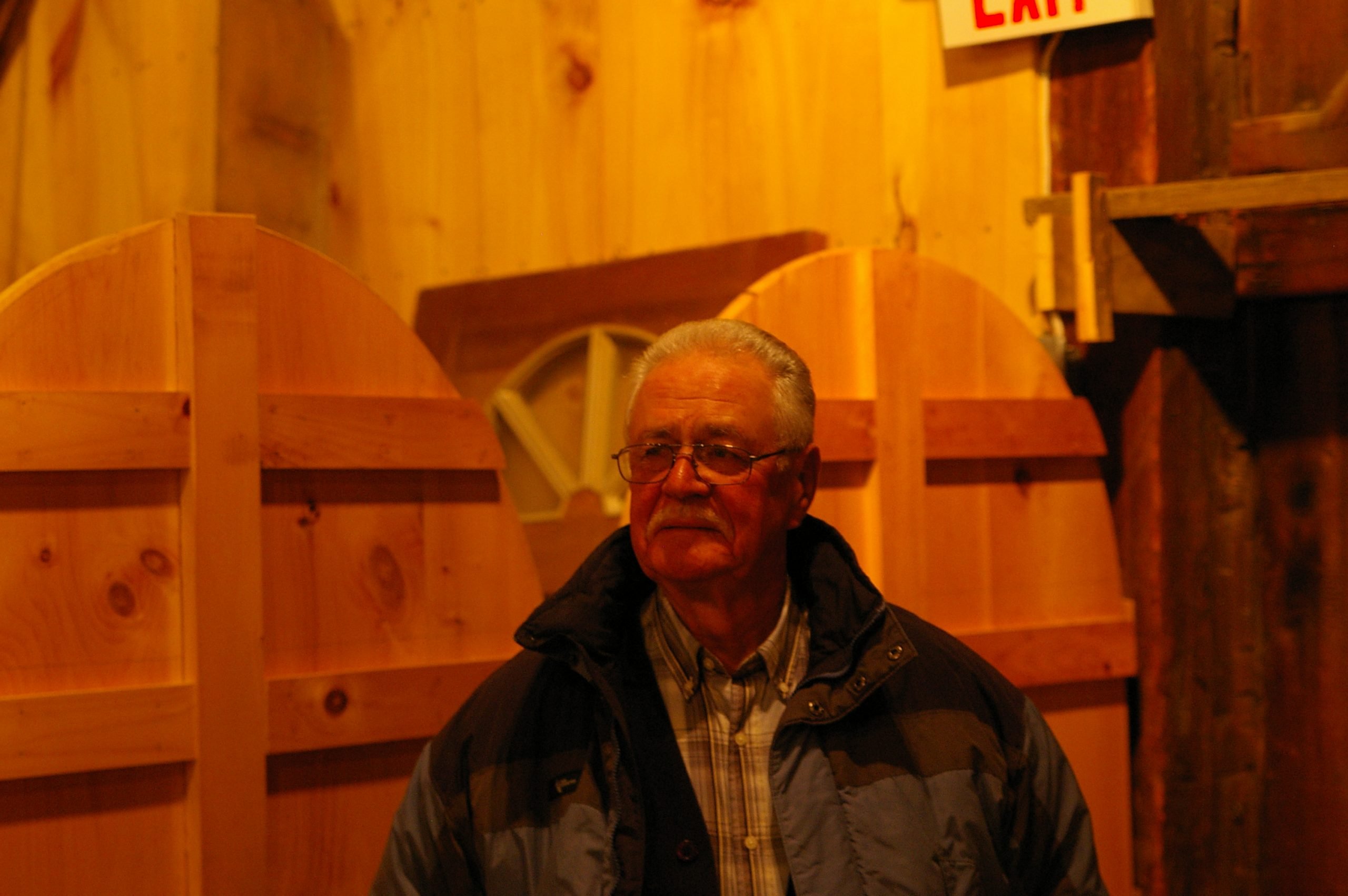 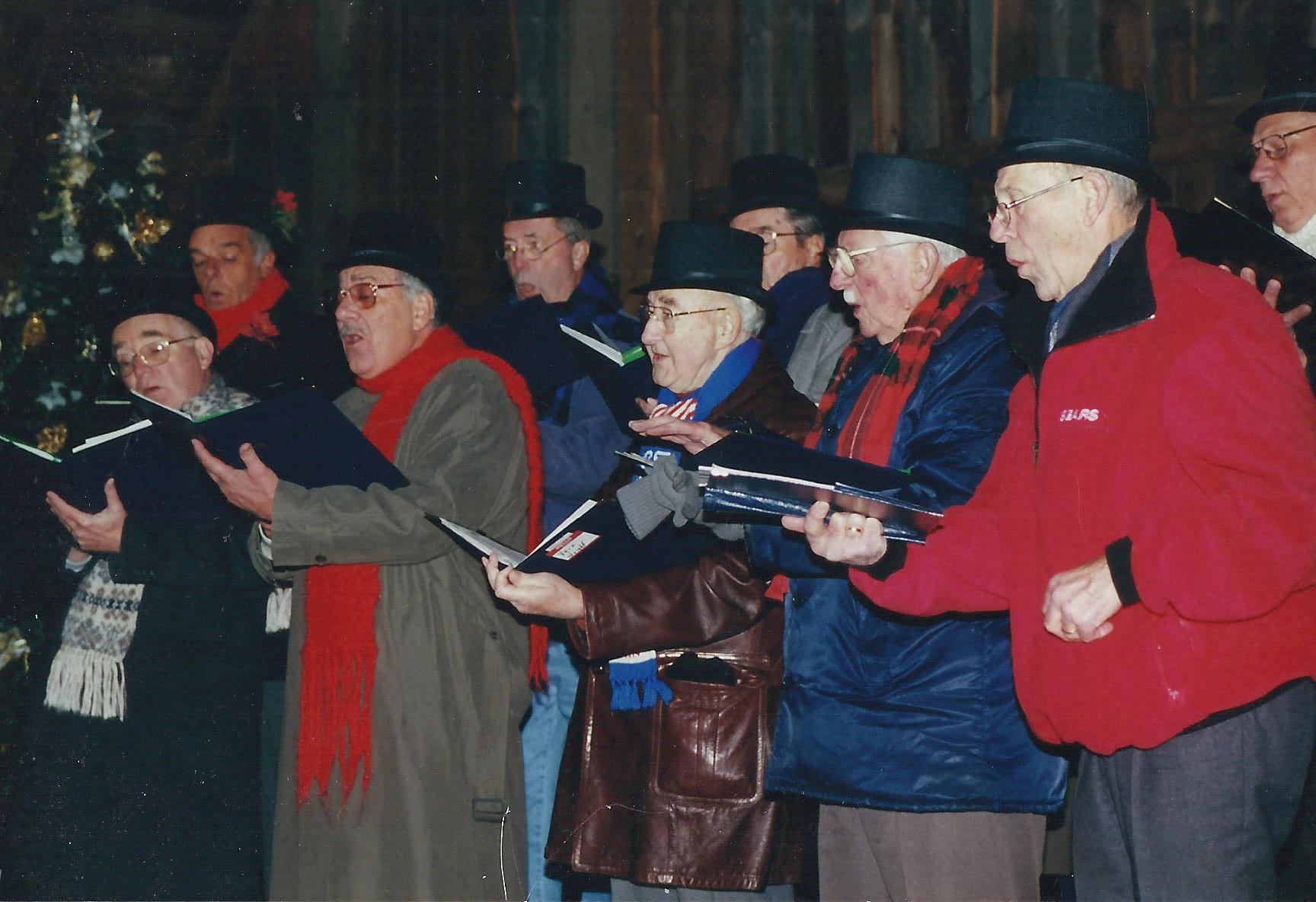 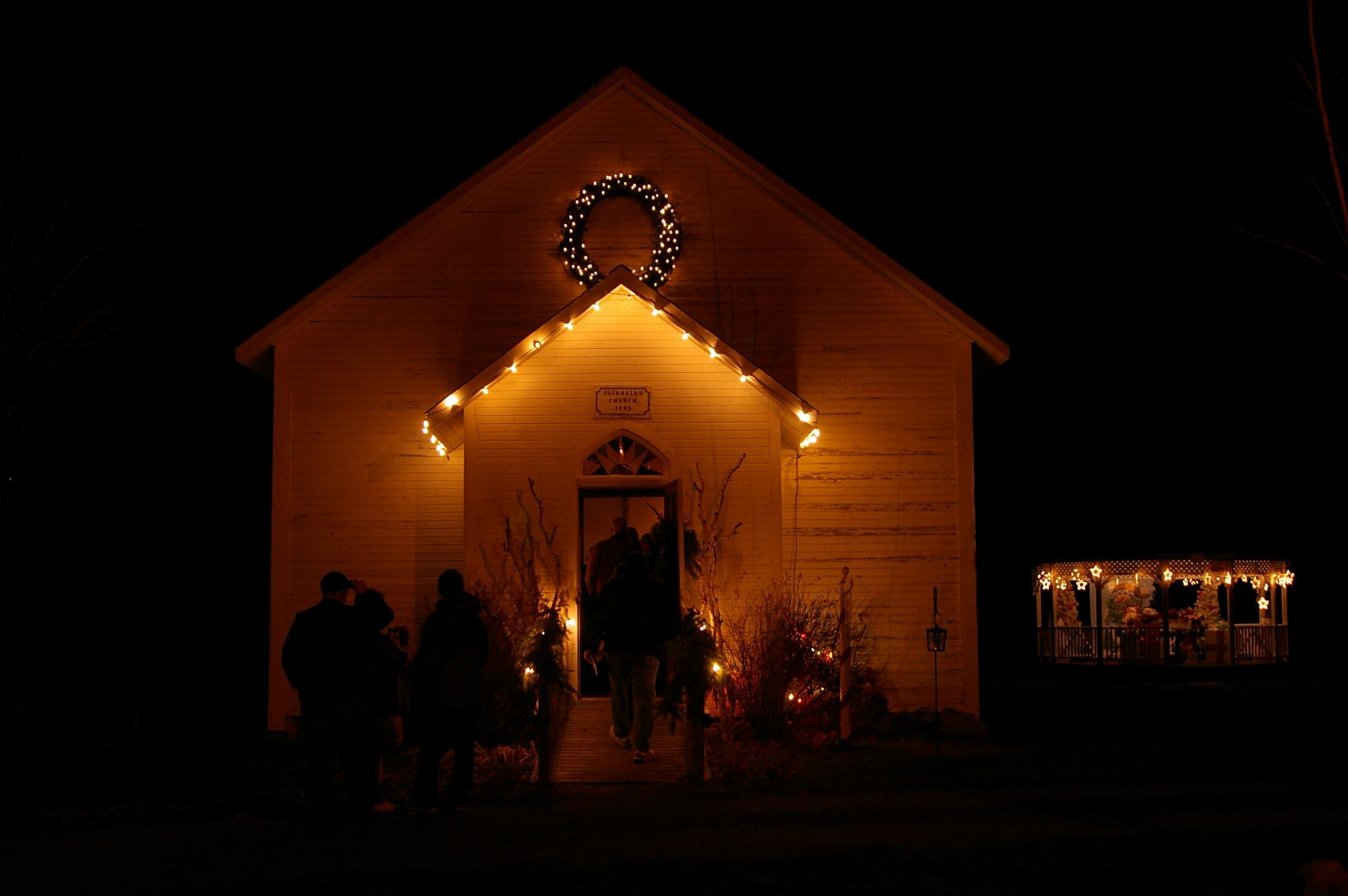 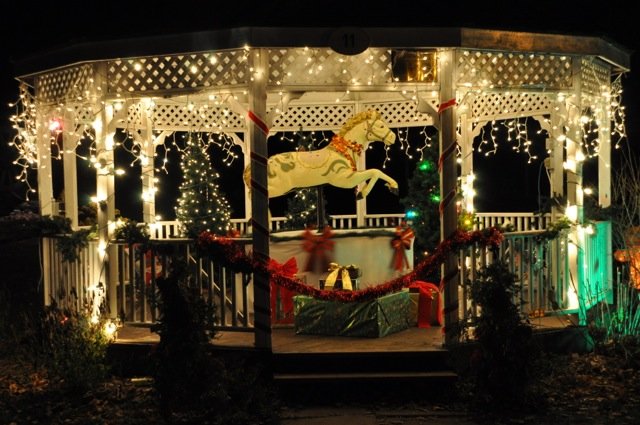 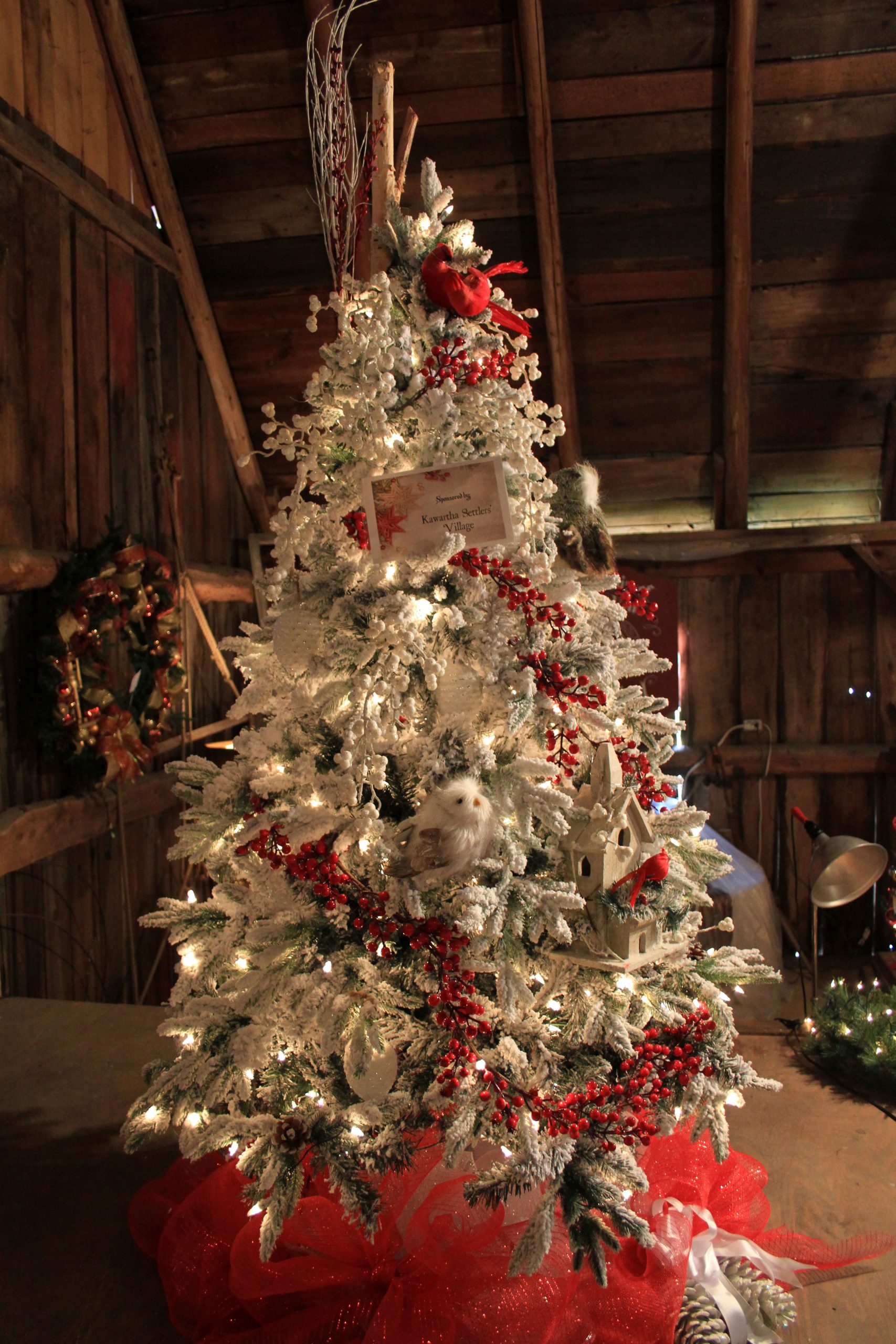 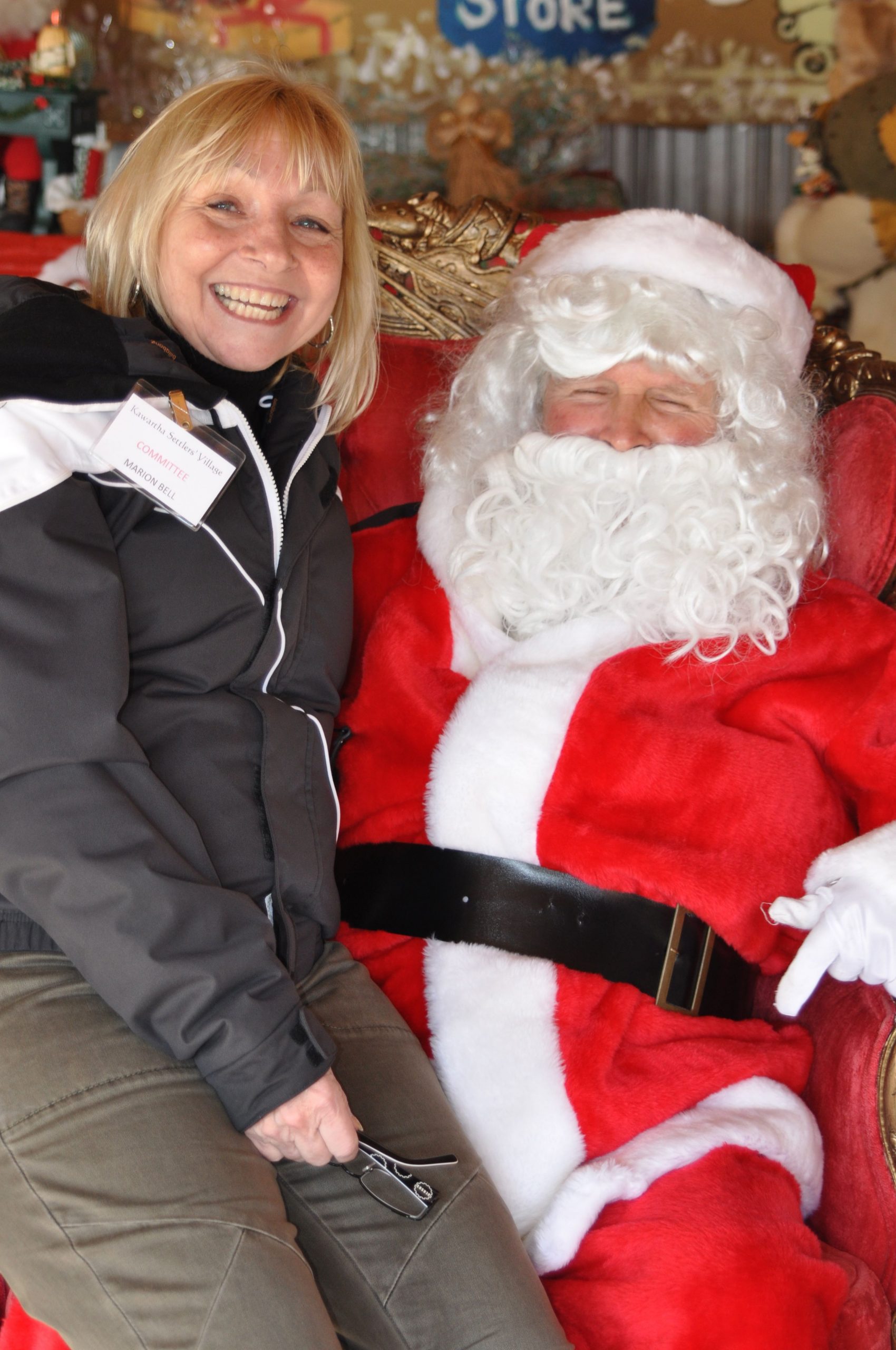 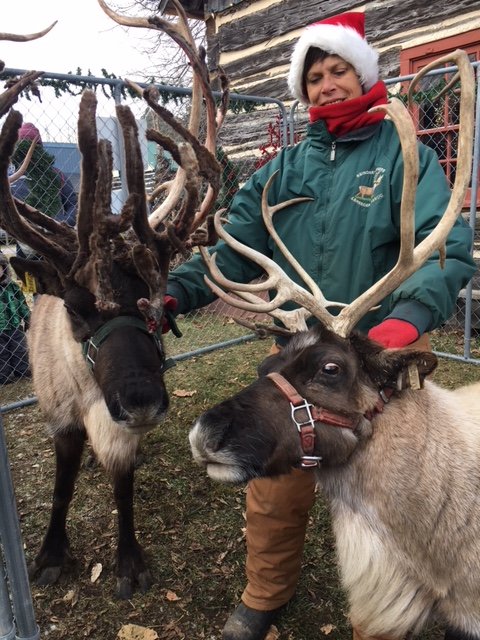 Karl Beck performing at the Festival of Trees

At the Festival of Trees Dinner, 2014

Crayola Activities in the Schoolhouse

The Gazebo at the Festival of Trees, 2012

The Festival of Trees in the Murphy Barn, 2011 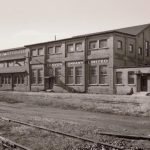 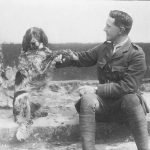