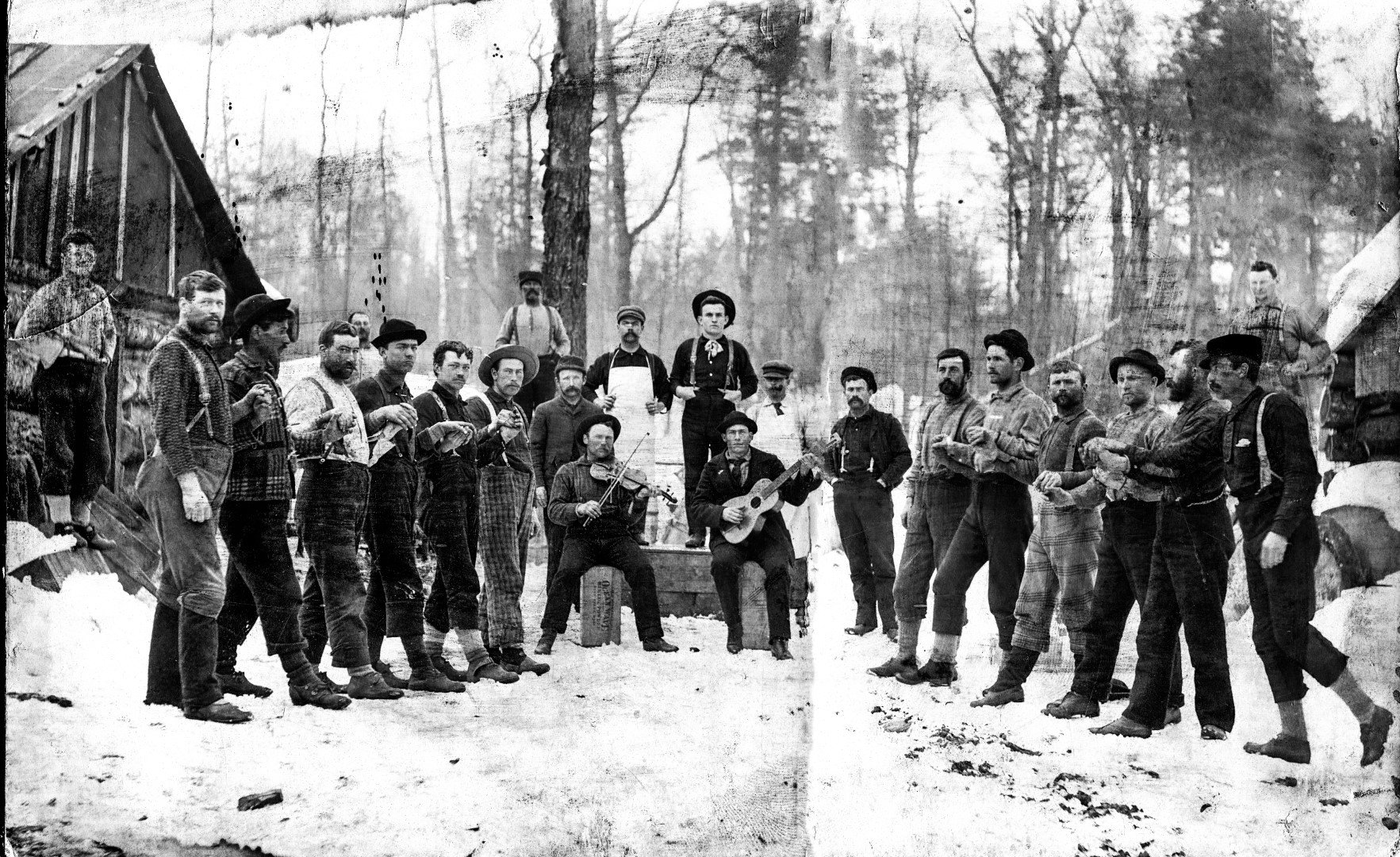 Song and Dance at a Shanty

On the long cold nights and Sundays (there would, of course, be no Sabbath breaking) the lumberjacks could take a break from their back-breaking labours to share happy moments together. Some liked to play cards or whittled as they drank tea (which was not included with their meals, they had to pay extra) or had a good chew. They also sang together, often acapella, though some were fortunate enough to have musical instruments. They might even have a dance.

Most of the songs were about their lives in the woods, and to modern ears, arranged to tunes that had a fair degree of similarity. In much of eastern Canada there came to be a common culture of the shanties—workers took their songs and stories with them as they travelled between provinces. Shanty songs became a unique piece of Canadian culture, that today is often forgotten.

Fortunately, in the late 1950s, Edith Fowke set out to record the old lumberjacks, while she still could. Her work was picked up by the CBC, National Museum of Canada and Smithsonian Institute. She travelled as far as British Columbia, but many of the songs were recorded in the Kawarthas. One of the best known songs was The Lumberman’s (or Shantyboy’s) Alphabet. It goes through the alphabet, relating each letter to an aspect of their lives. Another favourite was The Lumber Camp Song, which again relates life in the woods. Shanty songs were part of an oral culture, so there is a degree of fluidity to the titles and lyrics.

On winter’s night in 1894, Kinmount hotel keeper, retired Boyd shanty foreman and local legend Bill Dunbar was on his way home from a Peterborough horse race with friend Bob Cottingham. As was the custom in those days, they travelled on the lakes to make the journey shorter. At Gannon’s Narrows their cutter plunged into the dark, frigid waters of Pigeon Lake. The tragic deaths of men and horses reverberated through the community of Kinmount and the logging camps, inspiring the The Drownding of Bill Dunbar, as sung by Bobcaygeon’s Joe Thibadeau:

Come all you sympathizers, I pray you lend an ear.

It’s of a drownding accident as you shall quickly hear.

It’s the drownding of Bill Dunbar, a man you all know well—

He lived in the village of Kinmount where he ran a big hotel.

Bill Dunbar was a noble man as you may understand—

It made no difference what you profess, he would always treat you well.

There was no danger of being insulted in Dunbar’s big hotel.

They drove down to attend the races, as you may understand,

Returning home all from the same, he and Bob Cunningham [aka Cottingham].

The night being dark, they lost their way, which grieves me to relate:

They drove into Gannon’s Narrows at the foot of Pigeon Lake.

The team was lost, both men were drowned, which is hard for me to unfold,

It being in the depths of winter and the water was piercing cold.

Poor Bill he fought hard for his life, as I have heard them say;

He threw his mitts out on the ice as a token where he lay.

It was on a Tuesday evening they met with their sad doom,

And their bodies were not recovered until Thursday afternoon.

They were taken home to Kinmount; large crowds did gather there—

The people came from far and near when their heard of the sad affair.

Bill Dunbar in his former days was foreman for Mossom Boyd

And many the river he did run, both narrow, deep and wide.

He was never known to send a man where danger would draw near,

But he boldly took the lead himself without either dread or fear.

Bill leaves a wife and one small child in sorrow grief and pain;

Likewise his brothers and sisters in sorrow to remain.

In meditation they are left, which grieves them to the heart,

That it should ever come their lot that he would from them part.

He’s gone the road we all must go, let the time come short or long,

So I’ll drop my pen, likewise conclude my sentimental song,

Hoping to meet on a better shore where trials they are few,

Where we shall return in happiness old acquaintances to renew.

A is for Ax, and that we all know,

And B is for Boyd that can use it also

C is for chopping we first do begin

And D is for Danger we often fall in

So merry are we

No mortals on earth are as happy as we

T’me I dry, O derry I derry down

Use shanty boys well and nothing goes wrong.

E is for Echo that through the woods rang,

And F is for Foreman, the head of our gang

G is for Grindstone at night we do turn,

And H is for Handle so smoothly worn

I is for Iron which we mark our pine

And J is for Jovial we’re always incline’

K is for Keen edge our axes we keep

And L is for Lice that keep us from sleep

M is for Moss with which we chink our camp

And N is for Needle with which we mend our pants

O is for Owl which hooted at night

And P is for Pine which we always fall right

Q is for Quickness we put ourselves to

R is for River we haul our logs to

S is for Sleds we haul the logs on

T is for Team that pulls them along

U is for Uses we put ourselves to,

And V is for Valley we haul the logs through

And W is for Woods we leave in the spring

And now I have sang all I’m going to sing

Now boys if you will listen, I will sing you a song

They are a jovial set of boys, so merry and fine

They spend a pleasant winter cutting down the pine.

Some will leave their homes and friends whom they love dear

And for the lonesome pine woods their pathway they will steer

They are going to the pine woods, all winter to remain

Awaiting for the springtime ere they return again.

They are farmers, and sailors, likewise mechanics too

And all sorts of tradesmen, found with a lumber crew

The choppers and sawyers, they lay the timber low

While the swampers and skidders they haul it to and fro

‘Lay down your saws and axes, boys, and haste to pork and beans!

Arrived the shanty the splashing does begin

There’s the rattle of the water pail and the banging of the tin.

For you must take the pail and for some water go!’

The cook, he haloos, ‘Dinner!’ they all get up and go

It’s not the style of a shanty boy to miss his pie you know.

Dinner being over, to their shanty they all go

They all load up their pipes, and smoke till all is blue

‘It’s time you were out, boys,’ the foreman soon will say

They all take up their hats and mitts and to the woods they haste away.

Oh, each goes out with cheerful heart, and with contented mind

For wintry winds do not blow cold among the waving pine

Loudly their axes ring, until the sun goes down

‘Hurrah! my boys, the day is done, for the shanty we are bound.’

Arrived at the shanty, with wet and cold feet

They off with their boots and packs, for supper they must eat

The cook, he halloos ‘Supper!’ they all get up and go

It’s not the style of a shanty boy to miss his hash you know.

The boots, the packs, the rubbers all are thrown to one side

The mitts, the socks, the rags, are all hung up and dried

At nine o’clock or thereabouts, into their bunks they crawl

To sleep away the few short hours until the morning call.

At four o’clock the next morning the foreman loudly shouts

‘Hurrah, there! you teamsters, ‘tis time you were out!’

The teamsters they get up, all in a fretful way

Says one, ‘I’ve lost my boot packs, and my socks have gone astray!’

The choppers they get up, and their socks they cannot find

They lay it to the teamsters, and curse them in their mind.

One says, ‘I’ve lost my socks—I don’t know what to do’

Another has lost his boot packs, and he is ruined too.

Springtime rolls around, the foreman he will say

‘Lay down your saws and axes, boys, and haste to break the way’

And when the floating ice goes out, in business we’ll thrive

Hundreds of able bodied men are wanted on the drive. 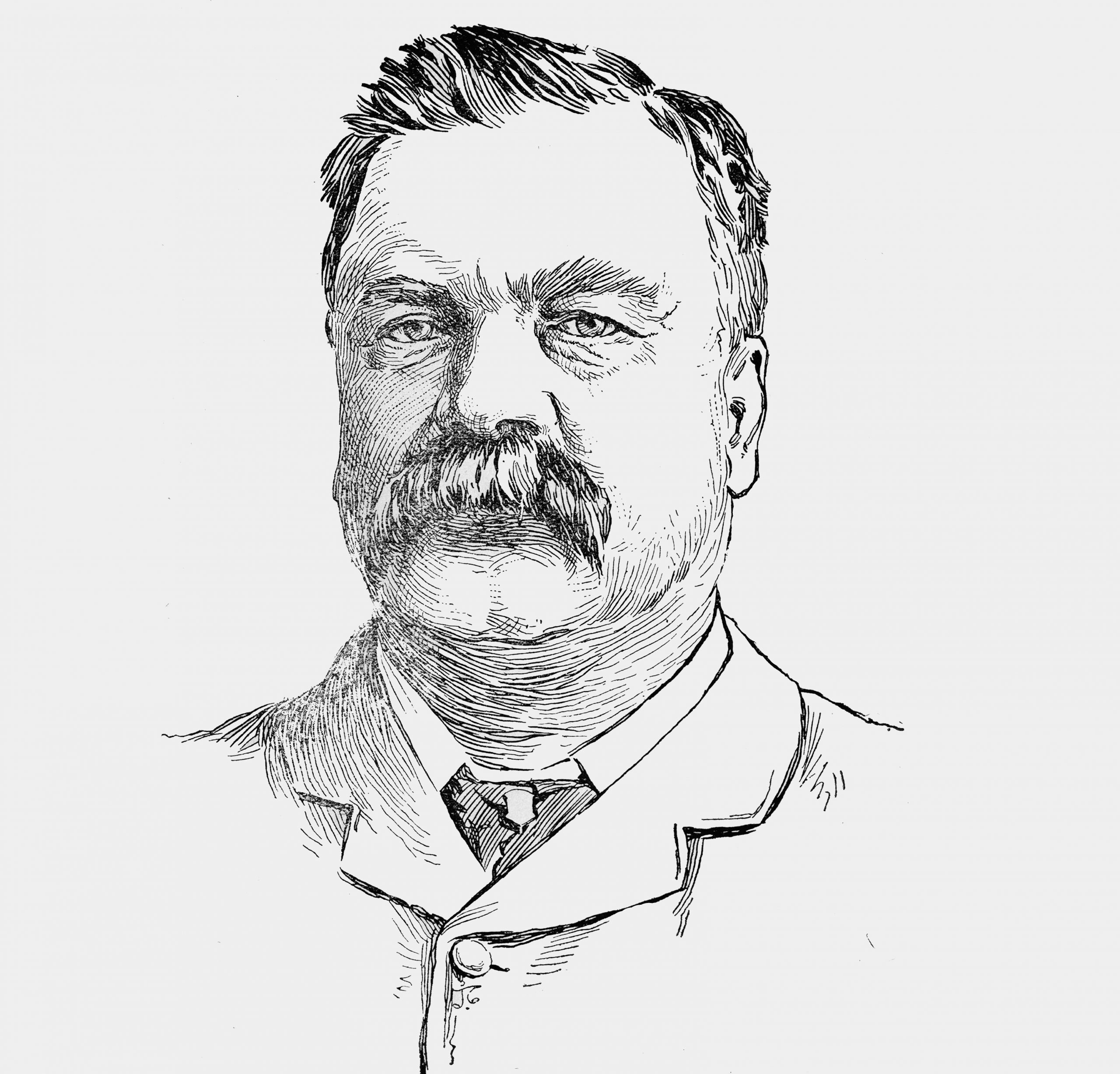 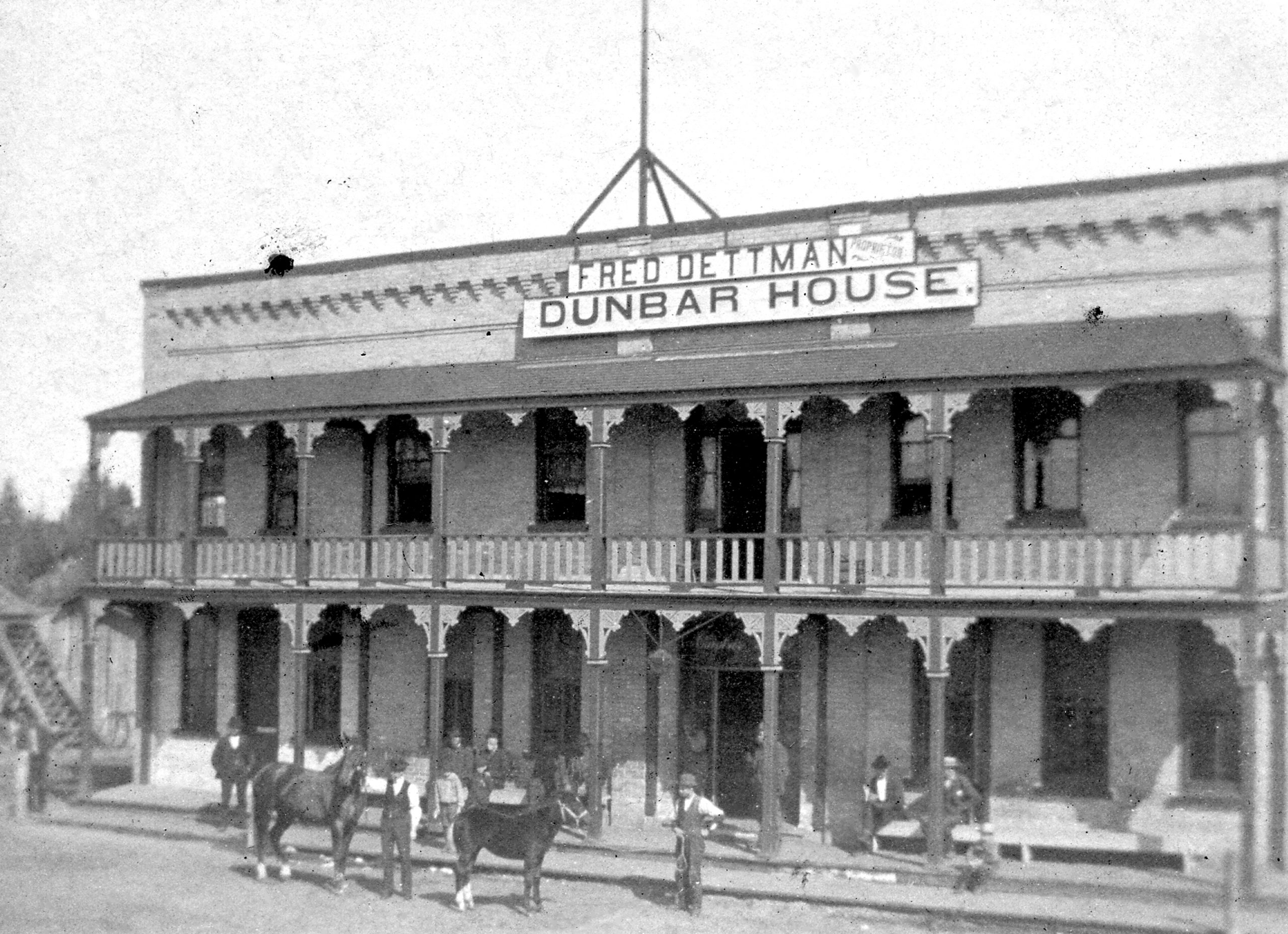 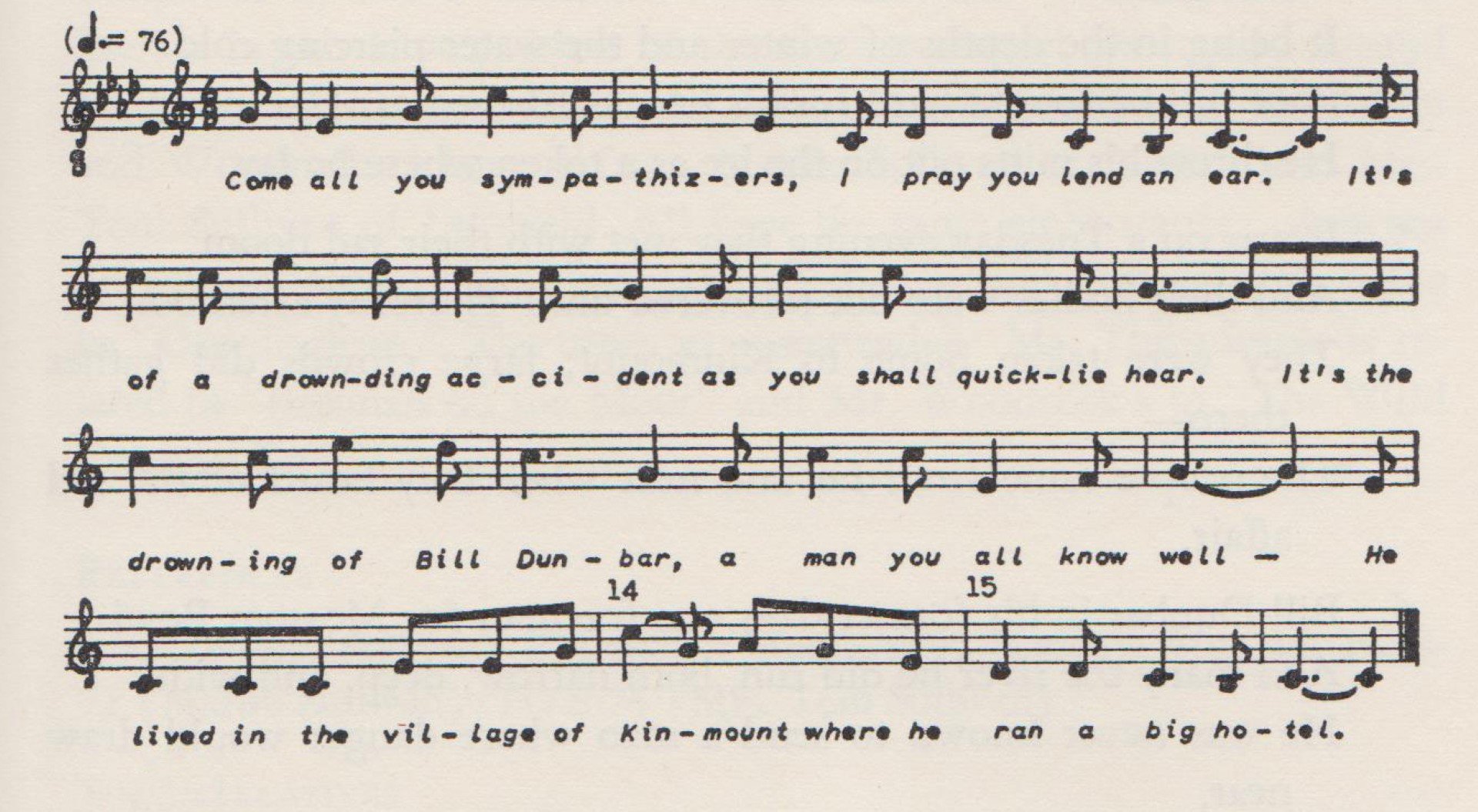 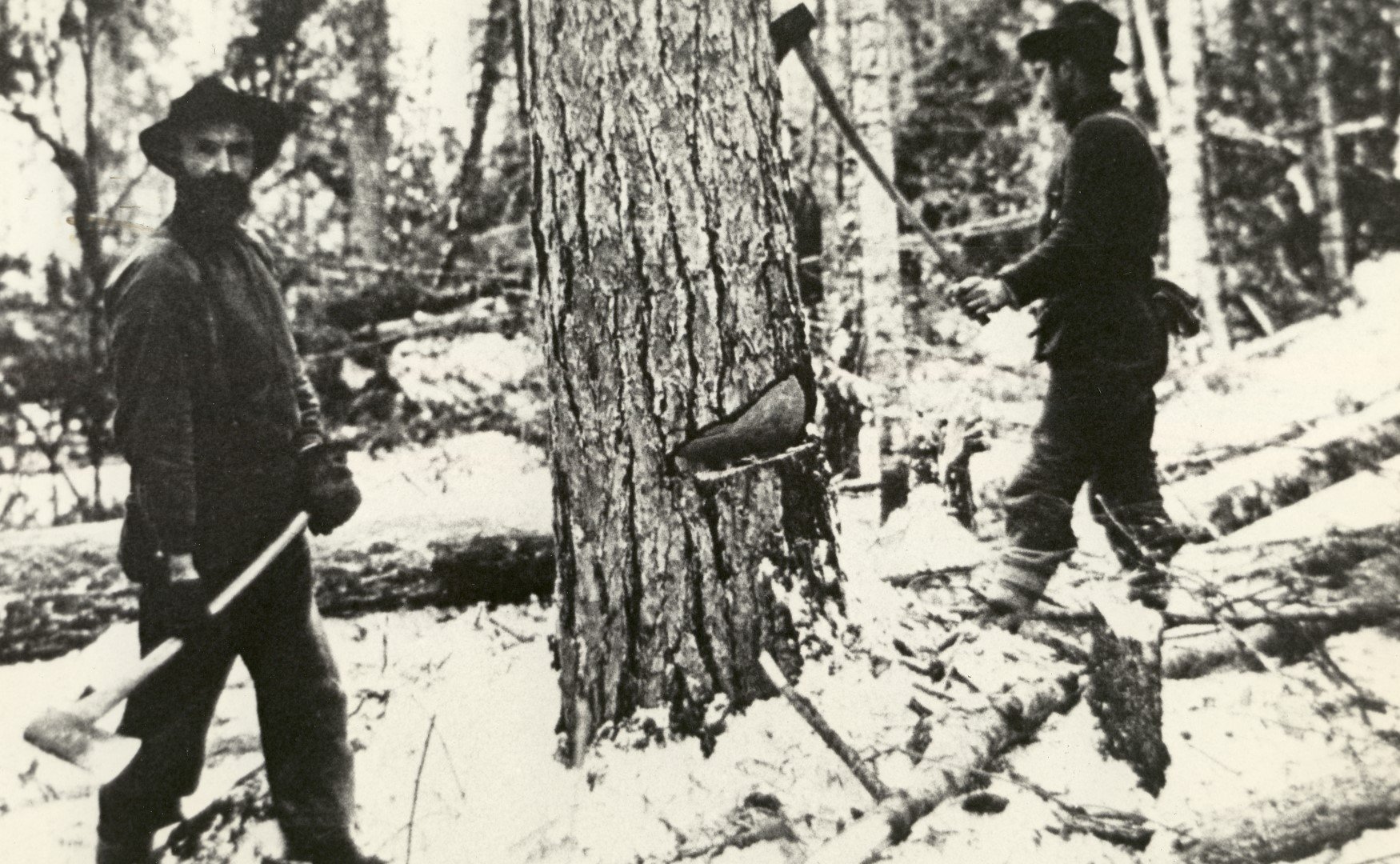 Fred Dettman's Dunbar House, after the passing of its legendary owner

The Drownding of Bill Dunbar

Song and Dance at a Shanty 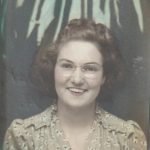 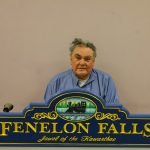