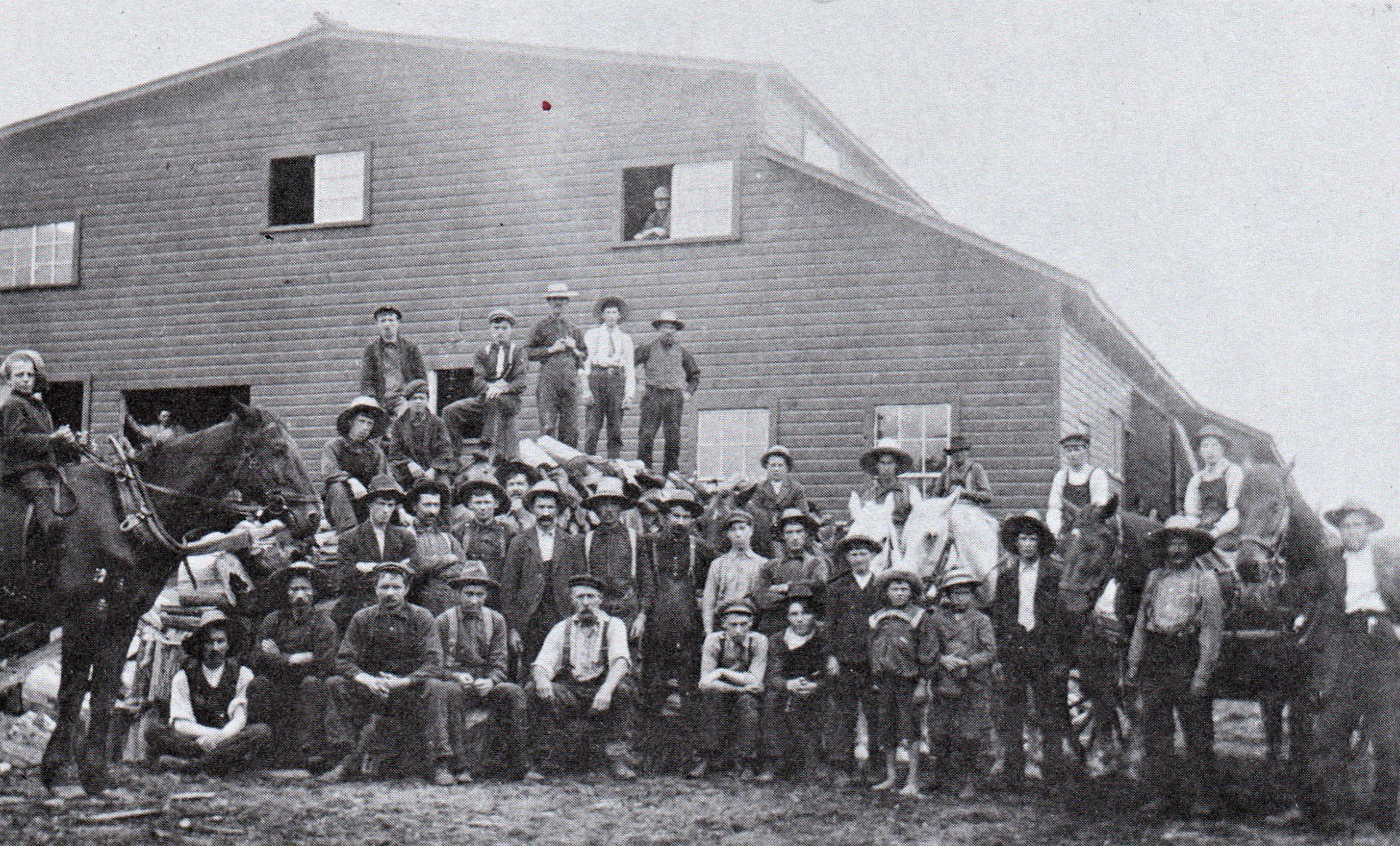 The crew at Craig and Austin Sawmill

Kinmount was always a “mill town.” Most of these mills were related to the lumber trade. The village had an ideal geographical site with its position on the Burnt River, the waterfall & dam to provide power and railway and roads to provide access to outside markets. The original surveyors identified the village site as a ‘mill privilege,’ and John Hunter, the founder of Kinmount, certainly had mills on the brain when he purchased the mill privilege in 1857. As soon as the Bobcaygeon Road reached the Burnt River, Hunter began to construct a saw & grist mill on the east bank of the falls.

A dam was the first priority to regulate water levels & allow for a spillway into the mill’s turbines. Before the dam, the Burnt River in Kinmount was just a mud channel, full during spring run-off, but quickly shrinking to a trickle flanked by steep mud banks during the rest of the year. Hunter’s dam maintained a steady level all year round. The grist mill was likely the most important of Hunter’s mills. In pioneer Ontario, the biggest demand was for ground flour or grist. Local farmers always grew grain for their own use, but getting the wheat ground into flour was a job for the grist mill.

The nearest grist mill was Bobcaygeon, and later Minden, which meant the local farmers were channeled into the village of Kinmount for this important function. While in town, all sorts of transactions enriched the financial health of the village. In early Kinmount, several stores catered to the local trade attracted by the grist mill. The grist mill continued in operation into the early 1900s. My great aunt remembers a family trip to the grist mill around 1905. Her father pulled the wagon up to the mill right beside the Bobcaygeon Road and left bags of flour while the family was shopping. Sometime later, the grist was discontinued, but the building stayed in use as a hydro generating plant supplying the town. The building was destroyed in the great flood of 1928 and never replaced.

A sawmill was also established on the east bank in 1859 by John Hunter, but its use was limited. There was lots of great timber to be had, but no practical way of getting the sawn lumber products to market. Teaming lumber down the Bobcaygeon Road was impractical. The sawn lumber was sold locally: a tiny market. The arrival of the Victoria Railway in 1874 kick-started the sawmill industry. Kinmount’s location made it an ideal spot for sawmills: the River delivered the logs on one side and the railway hauled away the finished product on the other side of the mill! Handling was minimal.

Various mills sprang up all along the Burnt River. A big new one was constructed on the west side of the dam, right beside the new railway line. A second large mill filled the area now occupied by Tim-Br Mart Lumber. Further upstream/up the road, a stave factory was built. Numerous smaller mills around the town also produced lumber products for shipment to outside markets via the Victoria Railway. At one time, seven mills in an around Kinmount were in operation. Kinmount was now officially a lumber town!

What were these products? Sawn lumber was of course the main product. Softwood lumber was the most common product as the millers exploited the rich forests of the area. But hardwood lumber was also sawn. Hardwood logs were difficult to float, but they could be cadged into the town, now the mill was so much closer to the source. Wood shingles were also produced in huge quantities. Cedar was the favoured wood, and the Kinmount area had some good stands of cedar. Tanbark was another product, used in the curing of leather. Natural chemicals called tannins are found in the bark of certain trees, especially hemlock. The local farmers could turn the otherwise useless hemlock into a cash crop: no processing needed. Fence posts, railway ties, telephone poles & cordwood for burning were other forest products that had value and were shipped out in large quantities. While the forests lasted, Kinmount was a centre for the wood products industry.

In 1880 John Dovey built a shingle mill on lot 15, East of Main Street. Shingles were a popular export from the mill town of Kinmount. In the 1800s, wooden shingles were the most common roofing material, and the demand was high. Dovey built the brick house across the Bobcaygeon Road and went into the shingle business big-time, eventually moving the to the next lot and selling the original site to a Mr. Dixon who went into the sawn lumber business. A newspaper clipping from 1886 credits John McGrath with cutting 42,000 shingles in a single 11 hour shift! Over 400,000 shingles were produced that year, with the product being shipped to Springfield, Massachusetts. Dixon’s mill next door cut 8,000 railway ties in the same year, among other products. Kinmount’s first plank sidewalks were supplied by the Dixon Mill. Fire, that scourge of the town, destroyed Dovey’s Mill in 1886. By 1902, the Dixon site was sold for tax arrears. Eventually the Phillips Lumber Company acquired the site, and today it is the home for Tim-Br Mart.

Anybody travelling north of Kinmount on the Bobcaygeon Road (aka Highway #121) will have noticed the concrete structures standing forlornly in the field beside the River. These are the last remnants of the Stave Factory. At one time, a large mill complex graced the site, dedicated to the production of wooden barrels. In the age before steel drums or fibreglass tanks, wooden barrels were the primary means for the storage and transportation of many products: both liquid & solid.

The barrels were semi-rounded and comprised of a series of small boards or staves. These staves were carefully fitted together and held together by a metal band or hoop. Each end was sealed by a head or round wooden platform. Barrels varied dramatically in size, but many weighed over 100lbs when empty! They were made slightly round so they could be rolled.

Since the main part of the barrel, the staves, were rounded, it was necessary to bend them from their original flat shape. At the local mill, this was done by steaming the staves and bending them into shape. And that’s where the concrete—steam houses or kilns come in. They were far more durable (and safe!) than wooden structures for the steam process. Concrete was uncommon in local mills, but the specializing of the Stave Factory made this structure necessary. Of course, the wooden structures are all gone, and all that is left are the concrete kilns.

A special railway siding was built to the back-door of the Stave Factory, and during peak production, a railway car was filed every week! The staves and barrel heads were loaded unassembled to save shipping space. The Burnt River brought the raw logs to the east side of the mill, they were sawn right on the site and shipped to markets down south. Steam powered the mill and at its peak it employed 50 men.

For whatever reasons, the Stave Factory seemed to be continually plagued by financial difficulties. It underwent many changes of ownership, usually related to bankruptcy. Its many owners and managers included Alex McIntosh, R.J. Mills, George Rowlinson, International Cooperage Co., Kinmount Cooperage Co., O’Hara & Donnelly and finally Noel Rivers. By the 1930s, the Stave Factory ceased operation. James Graham, manager for many years acquired the site & the wooden structures soon disappeared, leaving only the cement kilns: a sort of Stonehenge to the lumber industry. 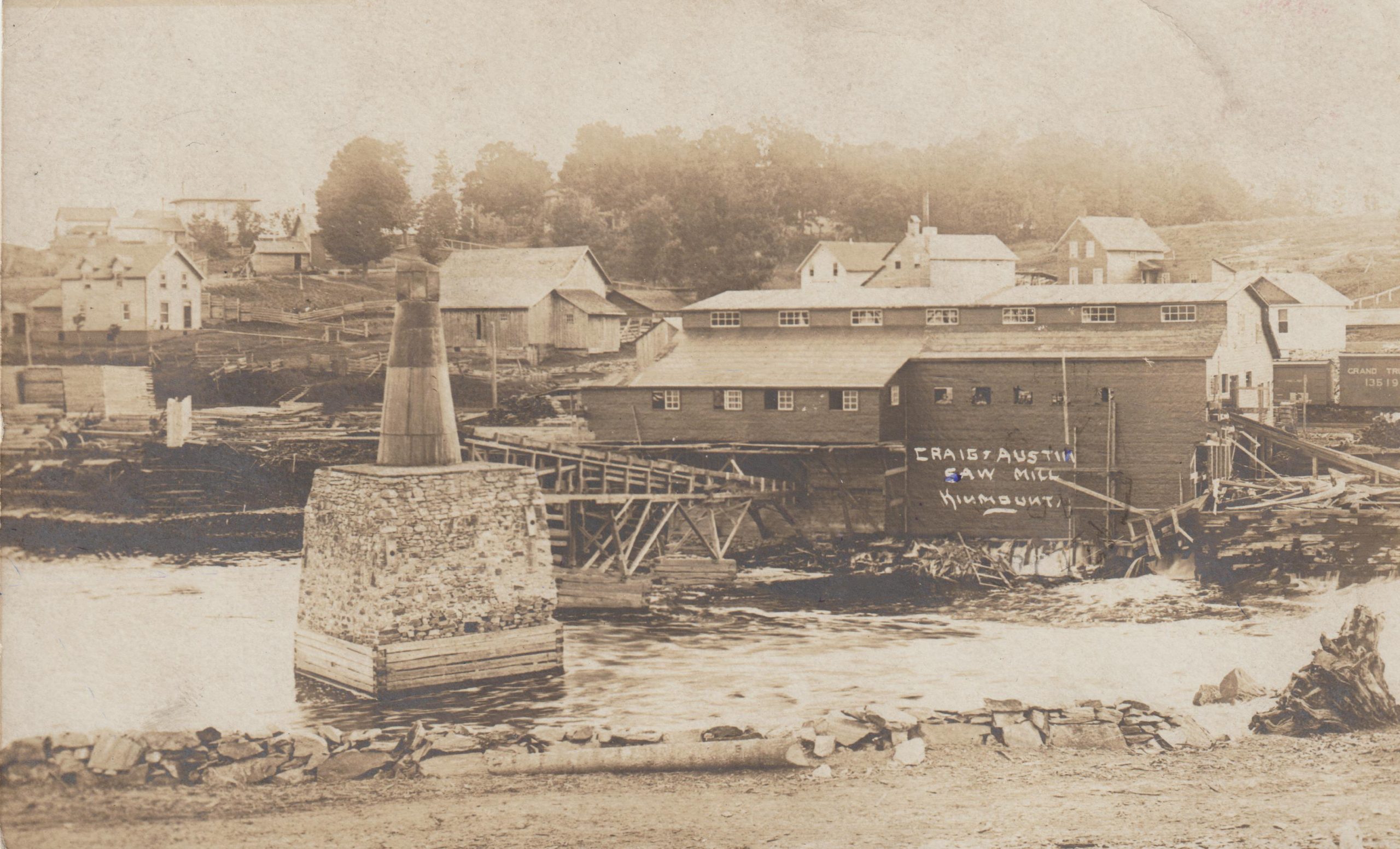 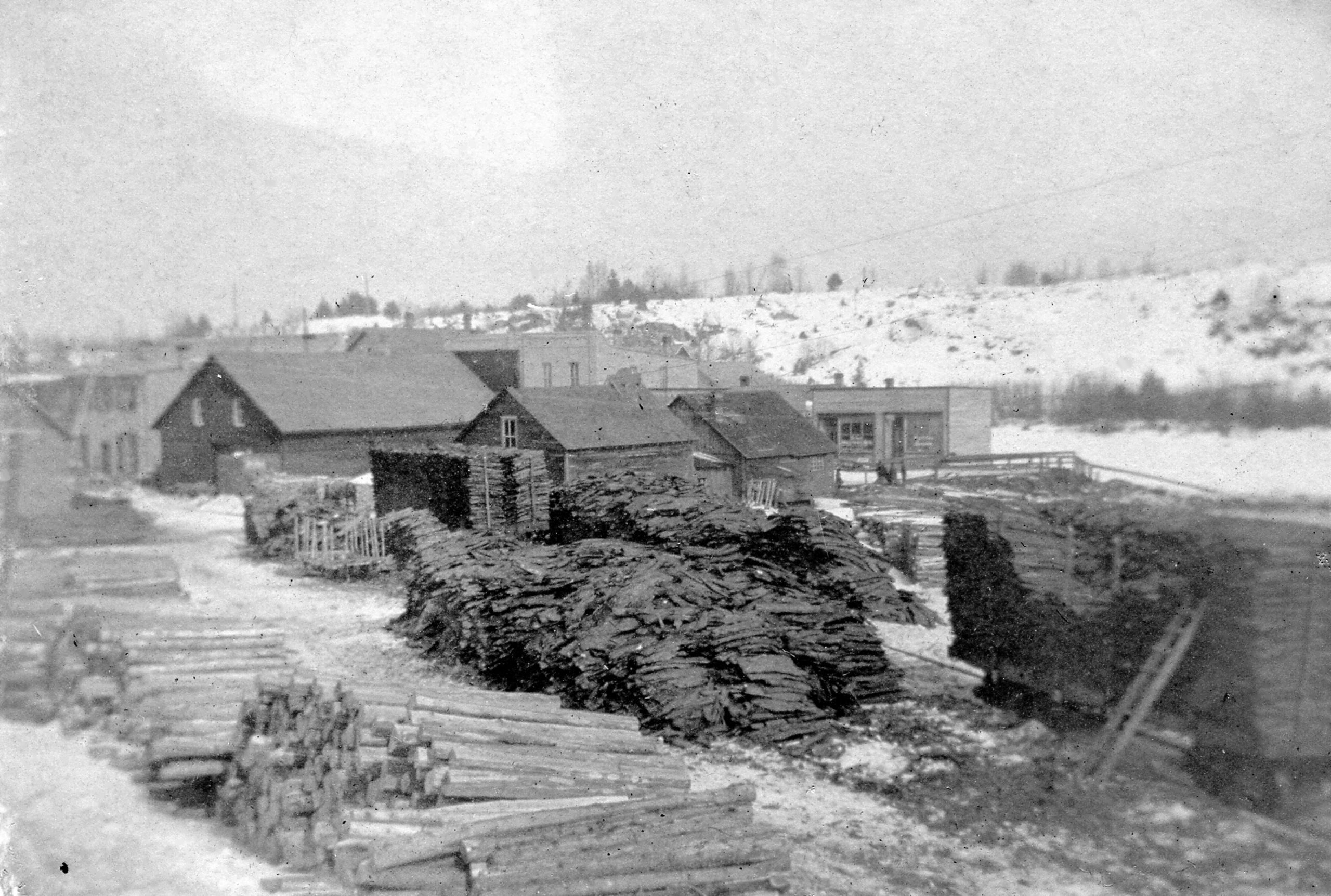 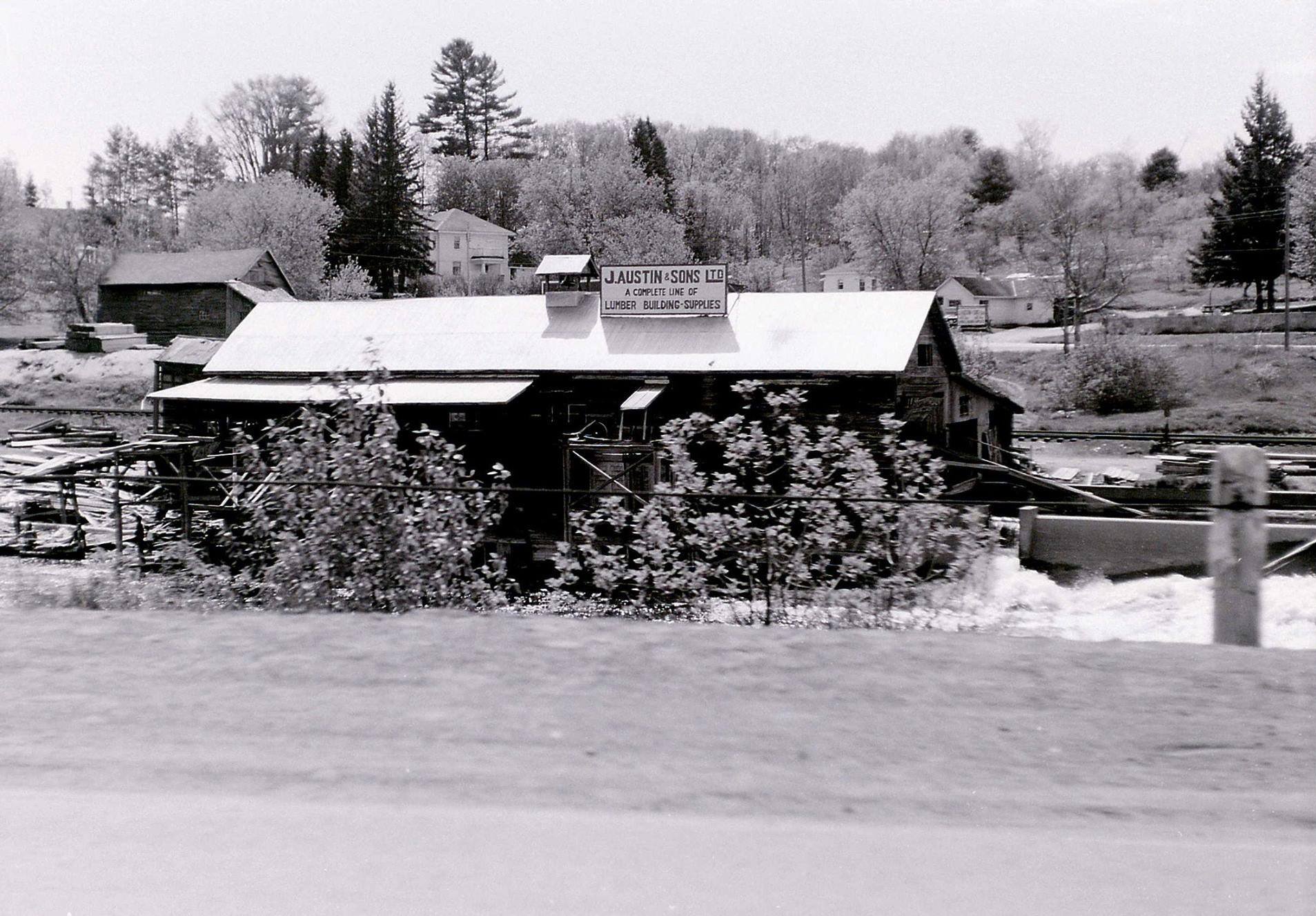 Looking across the Burnt River at Craig & Austin's Sawmill, from a postcard, postmark 1909

Looking across the Burnt River at the Craig and Austin Sawmill, Kinmount, from a postcard, postmark 1909

The crew at Craig and Austin Sawmill 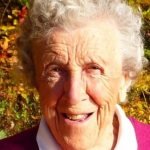 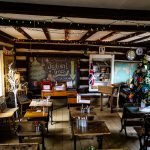 Scenes from the Festival of Trees