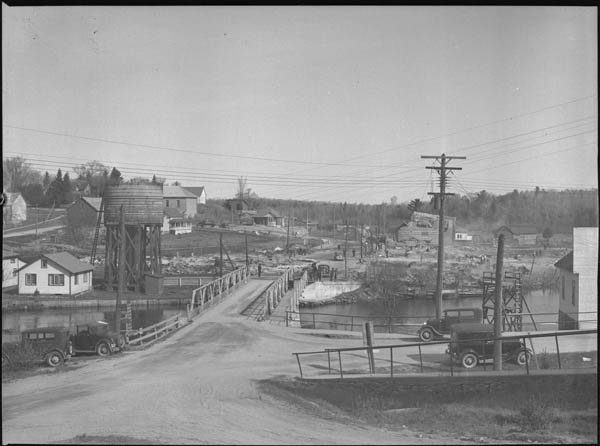 The Main Street of Kinmount after the Fire, 1942

Those are the dreaded words most people hate to hear. The village of Kinmount has had its share (and then some) of fires. Like most Canadian towns, the village contained a plethora of wooden buildings large and small. A labyrinth of dry wooden structures, crowded close together created a huge fire hazard. Wooden roof shingles (made just down the street!) further multiplied the risk. In a fire, burning wooden shingles would blow all over the place, spreading fire from above. Until the 1940s, there was no organized fire brigade and no fire-fighting equipment. Yes, pioneer Kinmount was an accident waiting to happen.

And happen fires did! Michael Barry’s business on Main Street was wiped out in 1870. Evidently he tried to ‘dry’ kindling by putting it in the stove oven. Not recommended. In 1890, the first large fire obliterated much of the Main Street. Many of the town residents were gathered in the Baptist Church (currently the Masonic Lodge) to hear noted Temperance Lecturer Joe Hesse speak on the evils of alcohol. At the height of the lecture, someone burst through the door to announce the Dunbar Hotel was on fire. (How ironic!) A furious wind whipped up the flames (and burning shingles) and soon the whole east side of the Main Street was ablaze, followed closely by the west side! Helpless locals telegraphed for help to Lindsay. In a heroic effort, the Lindsay Fire Brigade arrived by train in a mere 50 minutes. But it was already too late & most of the Main Street was in ashes. No lives were lost, but 13 businesses were destroyed. Bowie’s brick hotel was saved mainly because it was brick (hint, hint). Four other businesses were spared because they were distant from the blaze (Oh yeah, the Railway Station also survived, a harbinger of things to come!).

The fire was actually a blessing in disguise. The ‘old’ Main street was hap-hazardly built and poorly planned. The new structures that rose from the ashes like a phoenix where the magnificent Main Street of prosperous Kinmount (represented on our town mural).

The Spring of 1942 was one of the driest ones on record. About 6:00 pm on April 29, smoke was noticed coming from one of the sawdust piles at the Austin sawmill. Soon the sawdust was ablaze. Nobody knows how this happened: the backfire from the sawdust truck, contact with an overheated muffler, maybe a carelessly tossed cigarette. In another stroke of irony, a strong west wind soon had the mill ablaze. Flying sparks landed on the shingle roof of the old water tower beside the bridge. Witnesses claim a rogue gust of wind caused the wooden shingle roof to ‘explode’ and the Main Street was showered with burning shingles. The dry wooden buildings of Main Street were perfect kindling for the hungry flames. In a mere 2 hours, the entire core of the village was a smoking rubble.

The local bucket brigade was all the town had, and it was helpless in the maelstrom. It was soon realized stopping the fire was senseless, and the only course of action was to save possessions. One merchant calmly locked the front door of his store (why?) and walked away. All was lost and he knew it. Copying the early crisis, help was requested from neighbouring towns. Both Bobcaygeon and Fenelon Falls Fire Departments gallantly responded. Bobcaygeon detachment defended the schoolhouse and the east side of town. The Fenelon Brigade wheeled their brand new fire truck into an alley by the bridge to draw water from the river. Suddenly the wind changed direction and roaring flames trapped the firemen. The men saved themselves by jumping into the river, but alas, the fire-truck was destroyed!

The fire eventually burned itself out. Mother Nature did what man could not: halt the fire. But the Main Street: glamourous, dignified ‘Old’ Kinmount was gone forever. Once again the Rail Station survived unharmed. Sheds were burned off each end and on every side, but not a board was scorched. Maybe the ghost of old Sir William Mackenzie stood guard over his handiwork that night. It stood like an island of calm in a sea of destruction.

The Main Street of Kinmount was never the same again. Lost were 18 businesses, only 2 were rebuilt by their original owners.

Gone forever that night were:

Six Stores were actually built over the next year, but nothing replaced the dignity of old Main Street. An era in Kinmount ended one windy night in 1942. Life was never the same in town after. 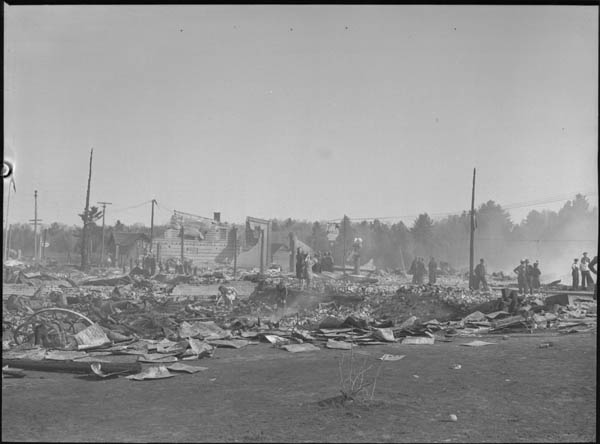 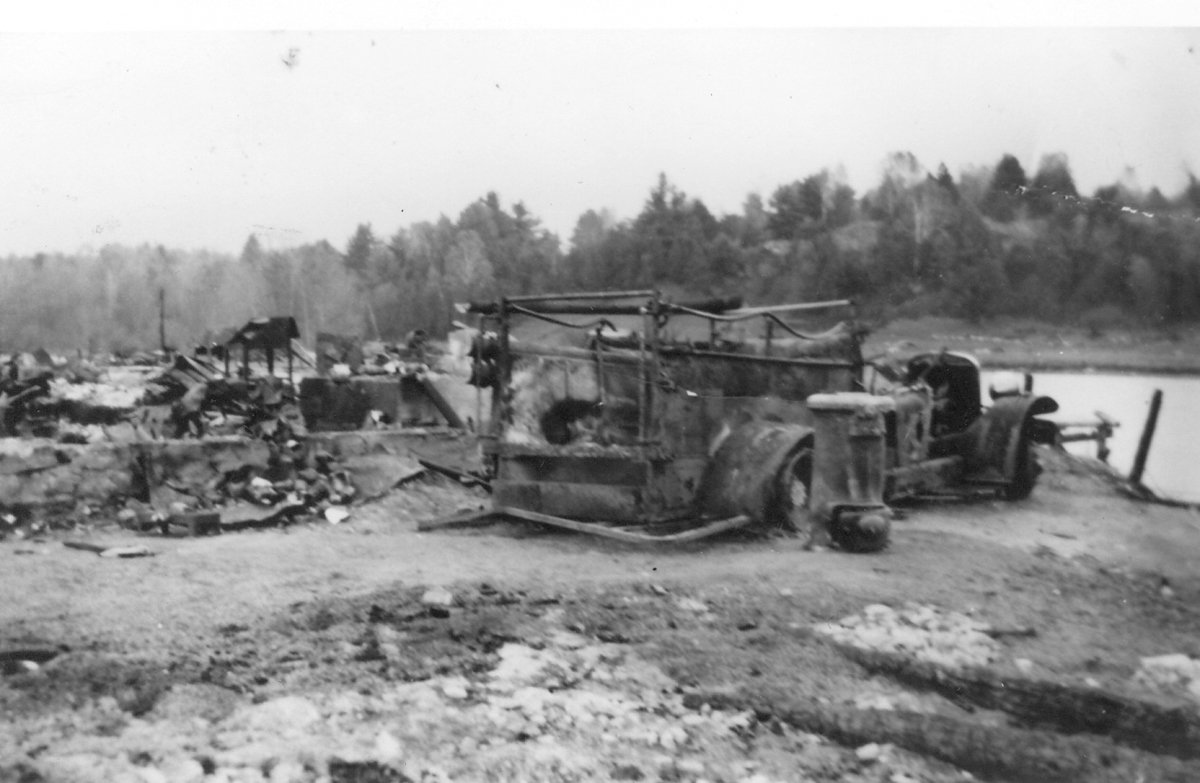 The Aftermath of Kinmount's 1942 Fire

Fenelon Falls' Burnt Out Fire Truck on the Bank of the Burnt River, Destroyed in the Great Fire of Kinmount, 1942

The Main Street of Kinmount after the Fire, 1942 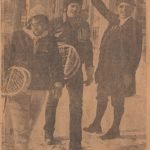 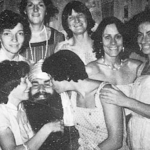