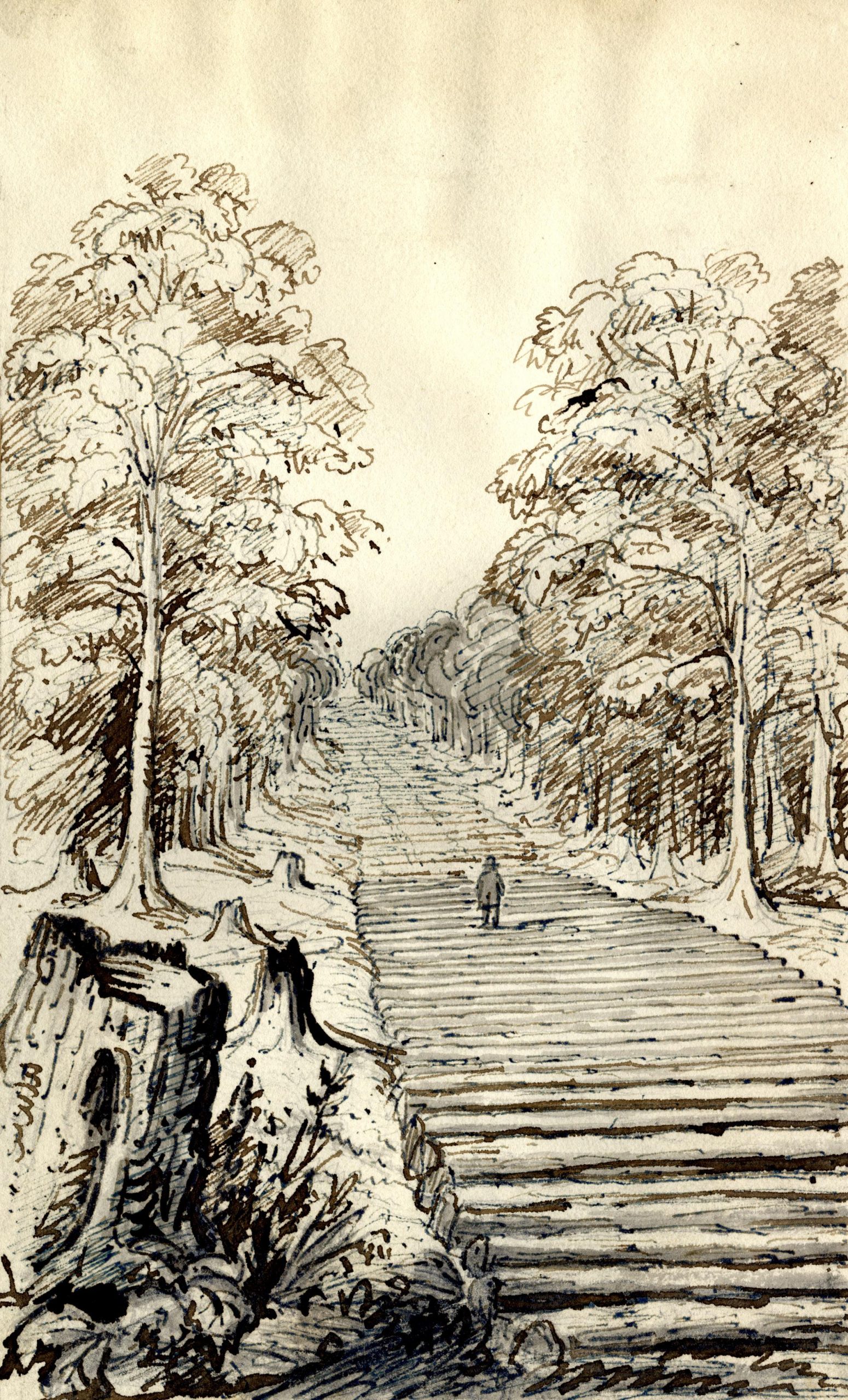 Hibbert Ware - Corduroy Road over a Swamp in Orillia Township, 1844

Local roads of the 1830s were rough indeed—typically nothing better than a strip of land where the tree stumps were cut low enough that the axle of an oxcart could pass. Prudent travellers would take an axe with them just in case they needed to do roadwork. For this generation, corduroy roads represented the most passable routes. But they were certainly not comfortable. Catherine Parr Traill recalled feeling, jolt, jolt, jolt, till every bone in your body feels as if it were going to be dislocated,” as wooden carts did little to dampen the shock of the wheels dropping between the logs. Upsets were fairly common and horses broke their legs in the gaps. Corduroy roads were so much work to make that they were never common, except for the most improved roads, and as crossways (a way across a swamp).

A generation later MacAdam (named after the inventor) aka gravel roads revolutionized transportation. The earliest MacAdam roads were made by breaking rocks with hammers. By 1864, not long after the facility opened, prisoners at the Lindsay jail were made to break stone to be spread on the town streets. Penitentiaries, as the name suggests were places to be penitent for sins and come to salvation through manual labour. The same year the county raised funds to Macadamize the roads from Lindsay to Fenelon Falls and Bobcaygeon. After Lindsay purchased stone in 1877 to give work to the unemployed, a local Ladies’ Aid believed the social benefits so great that it petitioned Council to continue the program the next year. It seems that many people believed that breaking stones was a way improve yourself through labour. However, Fenelon Falls’ Robert Jackett was nearly blinded by a flying shard while breaking stones for paving. In 1899, the first stone crushers began appearing locally. Before long no one was paving roads by breaking rocks with a hammer, as gravel roads became the norm—making automobiles practical. 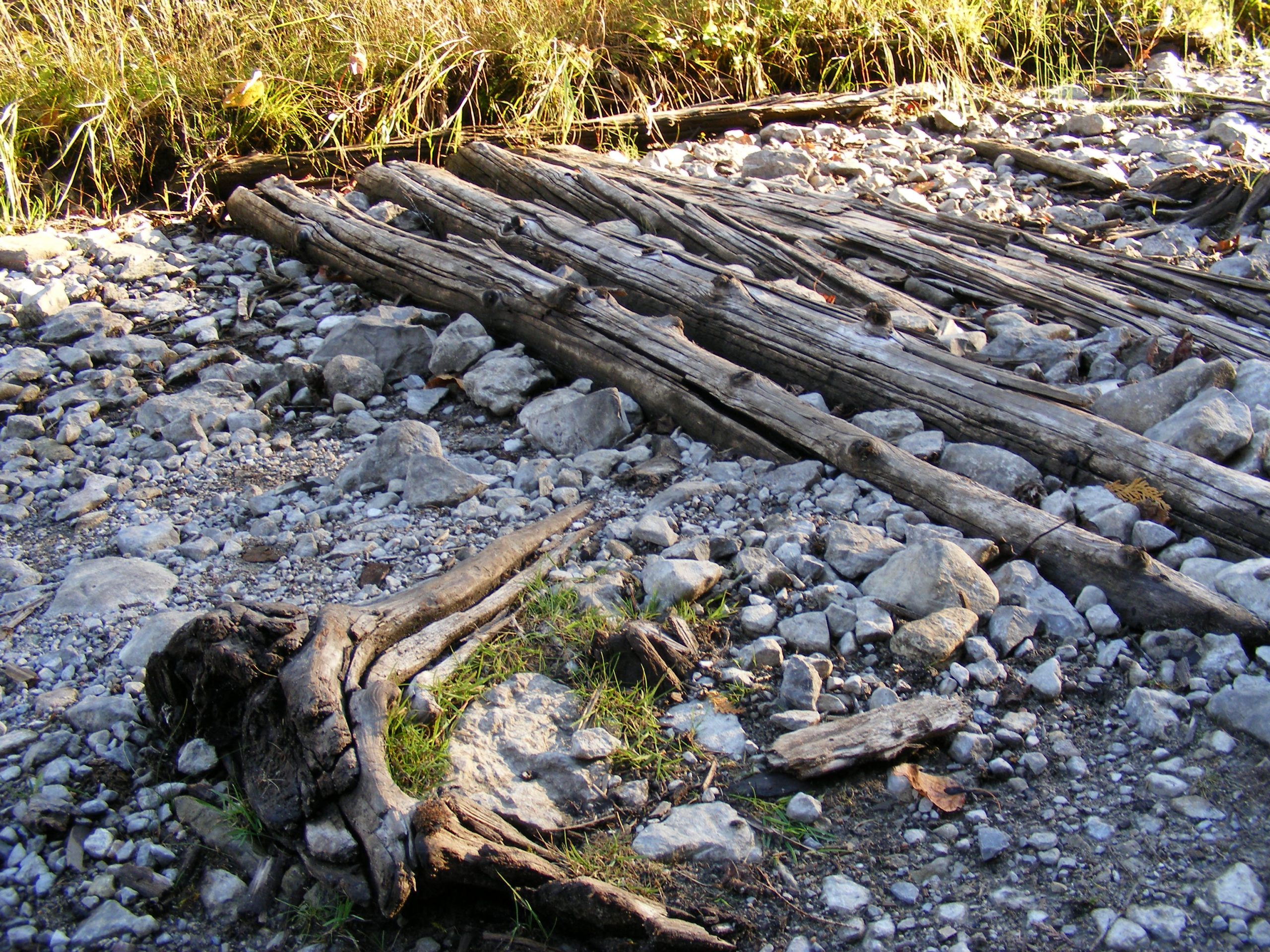 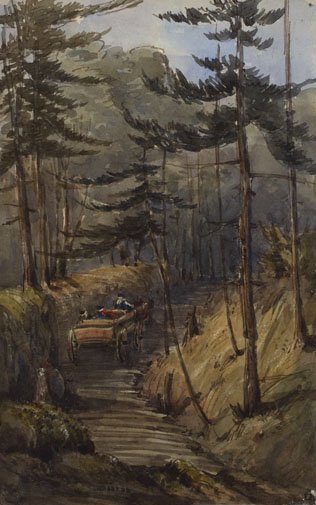 The remains of a corduroy road, or 'crossway' on the Third Concession of Somerville

Hibbert Ware - Corduroy Road over a Swamp in Orillia Township, 1844 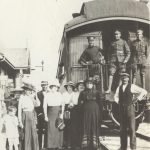 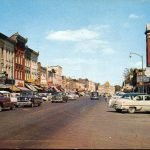