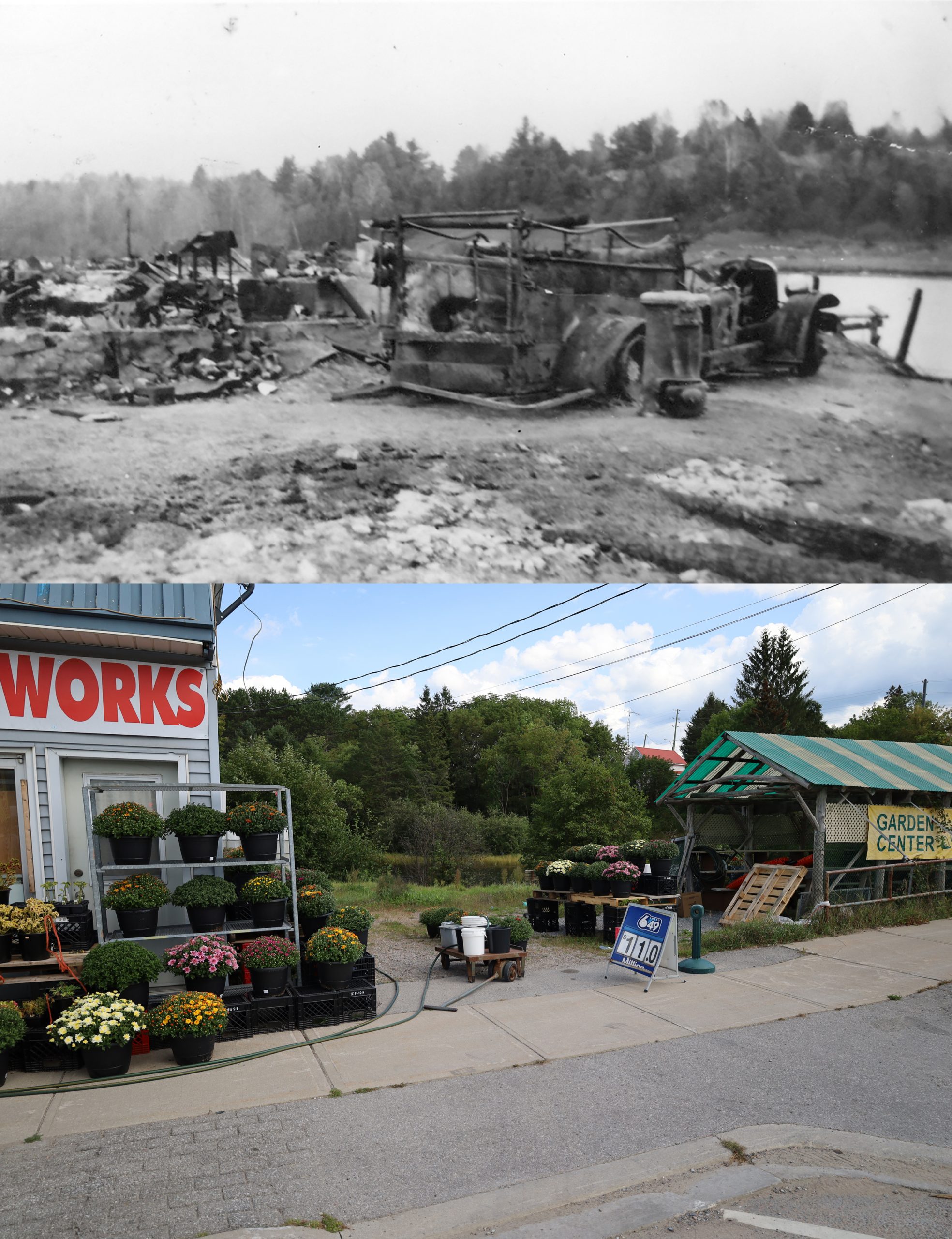 Fenelon Falls' Fire Truck on the bank of the Burnt River, and the same vantage in 2021

Many communities in the Kawarthas have had a great fire that levelled part of their main street. Kinmount has had the misfortune of multiple conflagrations—1890, 1898, 1917.  It has also been threatened by many forest fires over the years, though it survived, unlike some smaller communities nearby. But the most terrible of Kinmount’s Great Fires, was on the night of April 29, 1942.

Kinmount rebounded from its first three conflagrations. As awful as these were for everyone who got burnt out, these catastrophes could also be moments of regeneration. Throughout the Kawarthas, many mainstreet blocks that still stand today were built in the aftermath of a catastrophe, often better than what had been there before.

In 1942, Kinmount was already facing hard times. The community had been a hub for the extraction of natural resources in Haliburton and the north end of Victoria County. Located on the Bobcaygeon Road and later as a rail town, the supplies for many logging camps and mines passed through the village. But by the 1940s, the promise of prosperity through mining was a distant memory, as was the rush to harvest the district’s virgin pine. Though the Austin family might still float a few logs to their mill, many years had passed since the last great river drive went down the Burnt River. The Dirty Thirties had seemed to hit the resource economy of Kinmount harder than the farm families who got by making so much for themselves. And then, about 6:00 pm on April 29, someone noticed smoke in the sawdust pile beside the Austin Sawmill.

Nobody knows where the spark came from, but soon the whole sawdust pile was ablaze. Before long, the Austin sawmill was an inferno, then it jumped to the old water tower that stood by the bridge. An unexpected gust of wind caused the wood shingle roof to ‘explode,’ showering the Main Street with flying embers. It had been a dry spring, and the wooden buildings, with cedar shingle roofs were all too flammable. In what seemed like the blink of an eye, the entire core of the village had burst into flames.

At that time, it was a big investment for a community to have a fire truck. Kinmount still relied on its bucket brigade, who tried their best, but soon realized that there was nothing to be done to stop the flames, and just tried to salvage as much as they could as the village burned. Bobcaygeon’s fire brigade defended the schoolhouse, and the east side of the river.

Fenelon Falls had just taken the plunge to buy a brand new fire truck—only to have its baptism by fire at one of Victoria County’s great infernos. The firefighters roared north across the bridge, and set up by the river to fill up. Then the wind shifted, and the flames reached out for them. All they could do was jump in the river to save themselves. They were rescued by the Bobcaygeon Fire Department from the opposite bank. We can only imagine what it was like to go back home and explain what had happened—they were probably just happy to be alive.

Many thanks to Guy Scott for his help in writing this story.

Before and After the Great Fire, with the same vantage in 2021. Today there are bigger trees, but smaller buildings than in 1942.

Fenelon Falls' Fire Truck on the bank of the Burnt River, and the same vantage in 2021 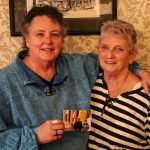