Gerry Rintoul Remembers the Founding of the Victoria Rail Trail 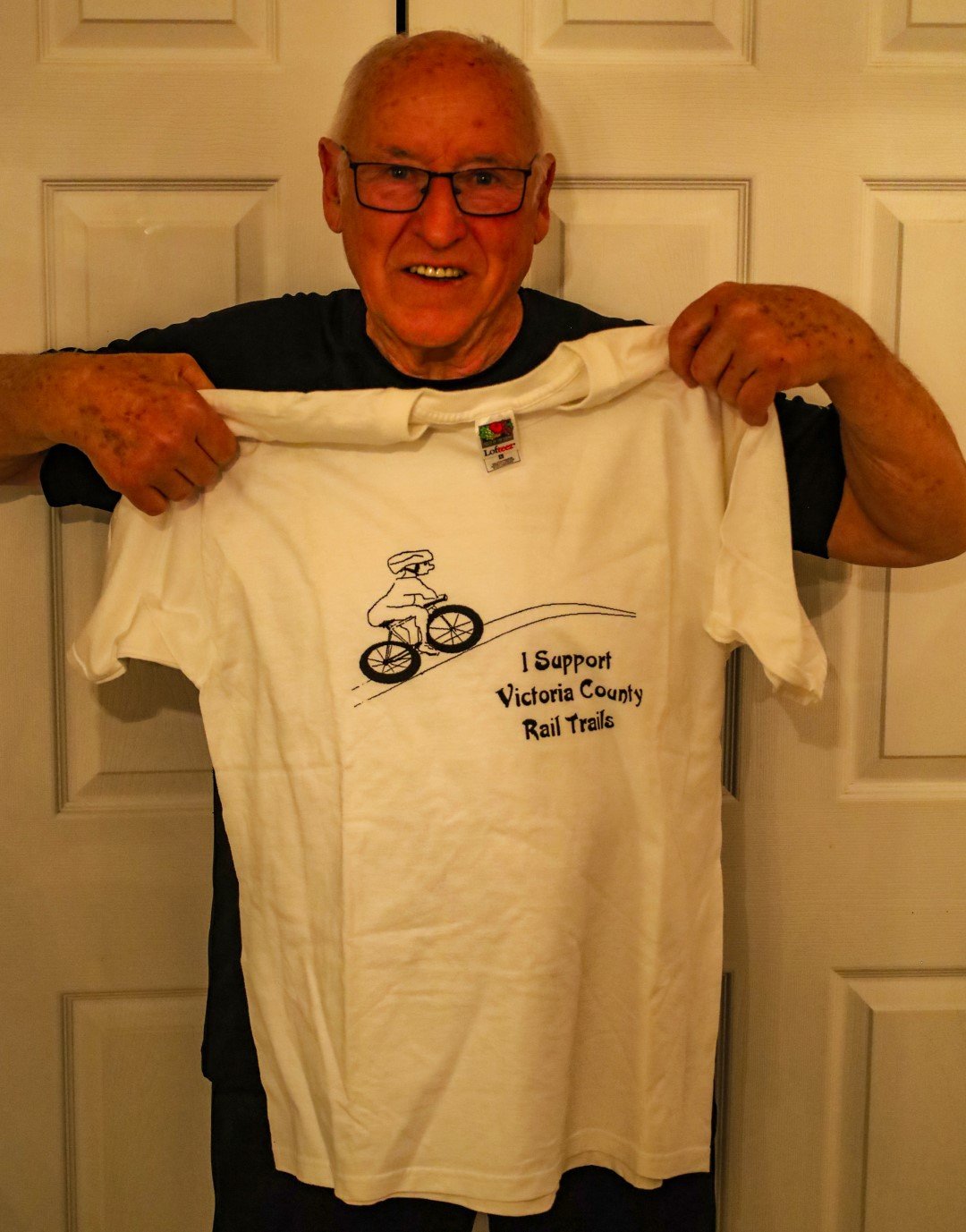 Today the Victoria Rail Trail is beloved by its community. Thousands of people walk, run, cycle, snowshoe, ski, ATV, snowmobile or ride a horse up the line each year. Given the multitudes that take it for granted today, it’s hard to believe that in the early 1990s, there was a vociferous political debate about whether or not to create the Victoria Rail Trail.

Since the mid twentieth century, the Victoria Railway was clearly waning. Cars were faster and could go many places that the train could not, the Canadian National Railway just hauled freight after 1968. On demand service ended in 1978, and by the late 1980s the rails were being torn out. As it was apparent that so many railways were not financially viable, the companies wanted to divest themselves of the liability all of these tracks and their costs of maintenance.

There really was only one candidate to purchase the railway lands—Victoria County. Though it might have raised more money to sell individual parcels, the railway wanted to be rid of the whole line, and while waterfront residents would want to purchase the right of way going through their lots, a lot of rural landowners might be reluctant to take on an old rail bed running through their farm or forest. Plus, a lot of the line traversed the Victoria County Forest.

The end line for the railway had been in sight for years, and some real estate agents had been selling waterfront lots to people on the probability that the strip of railway lands going through their parcel would become theirs with the demise of the railway. (To avoid hills that a train could not climb, the railway followed the valley created by the waterway.) So, when Victoria County purchased the abandoned Victoria Railway in 1991, many people expected that it would sell off the parts that were valuable, make waterfront property owners happy, and reap the windfall that would come.

But as so many railways were disappearing across North America, “Rails to Trails” attracted a huge following as many communities realized that the rail lines presented a unique opportunity for public recreational corridors. Once lands were parcelled off, breaking up the continuity of the lines, this opportunity would be lost forever. The debate about whether or not the rail lines should be privatized proved polarizing, and many politicians and residents had strong opinions.

For many years, Somerville Township had a very active snowmobile club, led by John Huke, Bill Handley and Briar Douglas. They created an impressive network of trails, branching out from Burnt River. By reaching agreements with private landowners, Somerville and District Snowmobile Association (SADSA) members could go to Fenelon Falls, Rosedale, Coboconk, or enjoy a scenic ride through the Pinery. Though they had managed to cobble together a route to Fenelon Falls privately, the old Victoria Railway opened up the possibility of going all the way from Lindsay to Haliburton. Some local snowmobilers had gone on vacations elsewhere, where such wonderful routes already existed—in the Province of Quebec, the government looked after snowmobile trails as a public service and a great way to attract tourists.

But back in Victoria County, the lobby to privatize the railway was very strong and had some support on County Council.  In 1993-1994 a wooden bridge was put across McLaren’s Creek, that was closed to motorized traffic. The SADSA tried to persuade County Council to turn the abandoned railway into a community multiuse trail, including allowing their members to snowmobile.

Some councillors supported the concept of creating a community recreational corridor, while others were vehemently against it. As SADSA was trying to get permission to convert it into a trail, the opponents to the scheme filibustered. But even as the issue was being dragged out for what seemed like an eternity, SADSA President Gerry Rintoul recalled, “I don’t think I ever entertained the idea that it wouldn’t happen. I may not have had the idea that it would get all the way to Lindsay.”

It took a lot of perseverance, as the snowmobile club kept finding a way to keep the hope alive. “If it wasn’t happening, then I would take a different angle and find someone else to talk to. Fortunately, the Warden at the time supported it.”

The issue, of course, became money. When it was apparent that the County could profit from selling the rail lands, could Council really spend tax payers’ dollars to fund a recreational corridor? A lot of work was needed to transform the abandoned railway into the rail trail. It did not take long for trees branches to reach over the line in search of sunlight, and while a locomotive would barrel on through and keep them clear by continually smashing the braches as they passed, cyclists would feel differently about doing the same. It took a lot of work to convert the old rail bed into a pleasant surface. A lot of grading and countless loads of screenings were needed to create the smooth trail that so many enjoy today.

One expense came to symbolize all of the costs that needed to be incurred—rebuilding the McLaren’s Creek Bridge to facilitate motorized traffic. SADSA said that they were willing to finance the work that was needed. Their opponents said they didn’t have the money. The bridge would cost about $100,000, and they had secured an grant from the Community Futures Development Fund to cover nearly half of it. So Gerry took a cheque for $55,000 down to the County. “And then I knew it could go ahead.” Relative to what Victoria County had to spend on other projects, it was a small sum of money.

The County decided they would be the ones to manage the project that SADSA had financed, but the club was happy that it was actually going to happen. Van Halteren Construction installed a new span from the Eagle Bridge Company and recreational vehicles could cross McLaren’s Creek. In the end the trail would go from the outskirts of Lindsay to Haliburton.

But while Haliburton kept the railway lands right through to what is now the Rails End Gallery, the line running through Lindsay, and the former site of the stations and sheds were valuable. “As a portion of the rail lands in Lindsay were sold into private hands, it was, regrettably not possible, to keep ORV traffic confined to the rail trail, when the decision was made to allow that traffic through Lindsay,” explains councillor Doug Elmslie.

Once they got the go-ahead, many volunteers, particularly from SADSA, spent countless hours helping to improve the trail, and raising the funds to contract for the work that was beyond what volunteers could reasonably do. Volunteers continue to perform much of the trail maintenance, as the Kawartha Lakes Snowmobile Club (as SADSA was rechristened after amalgamation) and Kawartha ATV Association help to fund its upkeep. The City of Kawartha Lakes has taken an active interest in the Rail Trail, as it has become a wonderful thing for its community and a tourist attraction. Ryan Smyth of Parks and Recreation has taken a particular interest in caring for it.

Lindsay had once been a railway hub, with lines to Haliburton, Port Hope, Toronto, Bobcaygeon, Peterborough, Midland, Coboconk and Port McNicholl. Of these lines, only the Peterborough to Lindsay and Lindsay to Haliburton segments were saved as community trails—and despite all of the rail lines and stations that once ran through Lindsay, they don’t connect with each other any more. Without the foresight shown by the community, particularly through the Somerville and District Snowmobile Association, there might not be a Victoria Rail Trail today. 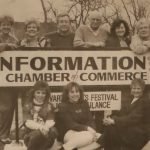 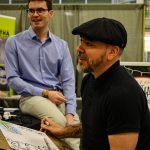