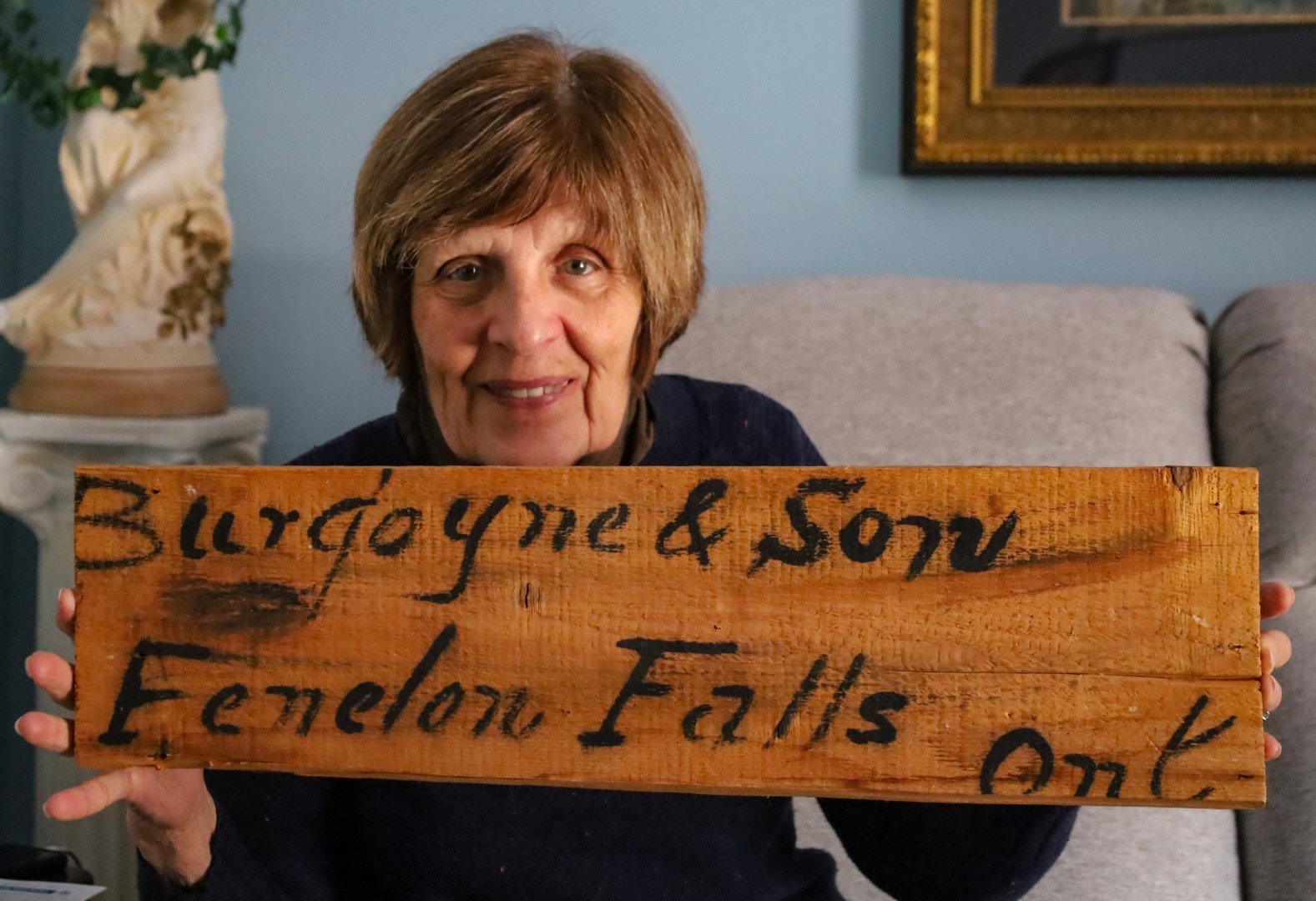 “I first started going there when I was about 8, and it was much the same store as Rhonda Watson’s Village Shop. The counters, the showcases, the shelves and even the tin ceiling were the same.” The Watson family really made an effort to maintain the feel of the traditional store that the Burgoyne family had started.

In the early twentieth century, being a storekeeper was a good profession. There were many general stores in Fenelon Falls, and each had their own specialties and clientele. McFarland’s did a great job of looking after farmers, Van Atter’s specialized in meat and fresh produce, while Burgoyne’s stood out for selling high quality goods, and being such a clean, neat, and beautiful store.

As a young man, Charles W. (Charlie) Burgoyne had gone to business school, and worked with his father (William) at the Napanee Paper Pulp Mill (located near the beach volleyball court in present-day Garnet Graham Park). Charlie lived in the house next door to the mill. In 1886, William opened a general store on the main street, and before long, both men concentrated on the family business.

Burgoyne’s took pride in selling the best merchandise they could. “I remember driving to Toronto with my grandfather [Charlie] in his Pontiac car. We would go buy socks at McGregors, underwear from Watson’s and of course would stop at Laura Secord’s to buy all kinds of candy and chocolates. And, then, I would enjoy some of the treats on the way home. We would stop on route share some with a family friend. My grandfather really liked to spoil me.”

“For all the time I was at the store, I can hardly remember any men shopping there. The men would go down to Heard’s Hardware store, while their wives looked at material.” Burgoyne’s customers typically made much of their own clothing, and many of their regulars were older women, who even down to the 1950s, still wore corsets in public. “I don’t remember anyone ever shoplifting.”

As a girl in the 1950s, Elizabeth would also wear a home-made dress and corset to events like a high school formal. “A corset was restrictive, but you could still go to the washroom, and it had a garter to hold up your nylons. It certainly gave you good posture and you didn’t want to eat much because your stomach was held in. It made you look damn good in a dirndl skirt, but it was hard to get into a car once you were dressed for a formal occasion.”

The store sold a great variety of fabrics, and the ladies of the village loved to come in and imagine the beautiful outfits they would make. There was a wall display of embroidery floss, countless lace doilies and just as many embroidered handkerchiefs. They sold boots, hats and purses. After the Second World War, they began to sell more ready-made clothing.

The stores were open late, especially on Saturday night—many until 9 or 9:30. On Saturdays, the farmers would come in after they finished work and the Salvation Army band would play on the main street. Everyone would sit in their cars, listen to the music, chat with old friends they didn’t get to see while tied up on the farm. The men typically talked about farming and the women focused on their families. People might come in to the store, buy something and then go back out to the informal street party. In some village stores, people would congregate around the stove to chat, but not at Burgoyne’s, “I’m not sure if my grandfather would have allowed that. He would have been concerned about shoplifting.”

Charlie was a reclusive and shy person. He loved to read Charles Dickens and have smoking parties at his home (it was an era when schools sold ashtrays, the Ross Memorial had a “Light up for the Lindsay Hospital” fundraiser and more doctors smoked Camels than any other cigarette). He was very empathetic, would always take the time to listen to his customers’ stories and concerns, was happy to take their eggs in exchange for goods, and if they didn’t have the money to pay for something that day, it would not be a problem. Most of the time, sales were simply recorded on the ledger. One customer remembered how discreet he was, when she had to go there to buy feminine hygiene products, “having worked there, I never realized that we even sold them.”

Charlie really believed in looking after your neighbour, and was the kind of guy who would give you the shirt of his back. “On my first day of driving, I was heading straight towards the sun, was blinded and hit Norm Kelly’s cart. My grandfather felt so bad, he practically made me kiss Norm’s feet and he made me pay for another cart for him. He would always do what needed to be done to make things right. Back then, all you had to do to get a driver’s licence was walk into Art Pogue’s garage.”

Charlie often played King Billy for the 12th of July Parade. The town would be buzzing as people travelled from all around. Ladies wore white, with a hat and umbrella. Many sported a sash from their shoulder to side. A grand parade was staged, with marching bands and glorious banners, celebrating the victory of William of Orange at the Battle of the Boyne way back in 1690. The store, of course, would not close even for such an event—Aunt Maud and Shirley Bulmer covered.

Back then, Protestants versus Catholics could still be an emotional subject. As the Protestants celebrated seeing King Billy riding his white horse, Catholics would jeer. One year the Catholics threw stones at Charlie as he was going across the bridge—he was not hurt. The rival denominations “did not like each other, it was not all just in fun.”

Maud Littleton—a spinster, who was not a blood relative, but was treated like a member of the family and called Aunt Maud—helped manage the store for many years. “She always brought in delicious home-made buns or biscuits and her sugar-cookies were the best. Aunt Maud’s treats really were the best part of working at the store.”

Many businesses issued their own currency—until the Bank of Canada asked everyone else to stop in 1944. Burgoyne’s had aluminum tokens in various denominations ranging from 1 cent to 1 dollar. Though it would be shocking today, they were used to pay workers and purchase customers’ produce—it was in a sense reciprocal to the practice of customers buying everything on credit. Burgoyne’s stopped issuing their own tokens because they could only be exchanged with someone who felt good about redeeming them at the store, and were inconvenient for people from out of town.

Burgoyne’s operated three stores connected internally with an archway through the stone walls. One largely sold fabric and clothing, the second furniture and carpet, the third dry goods and groceries. An ingenious pulley system took receipts from the front to the back. “Because I was small, it was often my job to set up the displays in the windows. I learned how to drape material so it would look nice and one window was just for china.”

Growing up at Burgoyne’s store, it was easy to take everything for granted. “The store really provided for us, because of it our family had the best of everything.” But at the same time, the store was a lot of responsibility. “When I was working there I always looked out the windows, saw my friends and just wanted to go play with them.” As a teenager, Elizabeth covered the store while her grandfather ate lunch or supper. Charlie literally worked right up to the day he died, at the age of 87, in 1958.

Charlie left the business to his daughter Helena and her husband Garnet Graham. They operated it for a few years, Garnet found that he preferred to be a travelling salesman, for National Grocers and especially Confederation Life. Making countless stops in the area with his bag of tricks, Garnet soon became a local legend.

Once Garnet found his stride with Confederation Life, “my mother wasn’t an outgoing lady and she couldn’t handle the store on her own. Let’s face it, selling 10 yards of cloth per day wouldn’t keep the store open.” So Helena and Garnet sold the business. Before long Ron and Elsie Watson took over, who kept the atmosphere of the old country store, but modernized its merchandise. There was much less fabric and much more ready made clothing. “It was sad to see the store sold, but my parents wanted me to go into nursing, and it was a good thing that I had the chance to have learned so much at the store.” Through the Watson’s family’s interest in preserving aspects of the store that the community appreciated, Burgoyne’s store lived on in spirit. 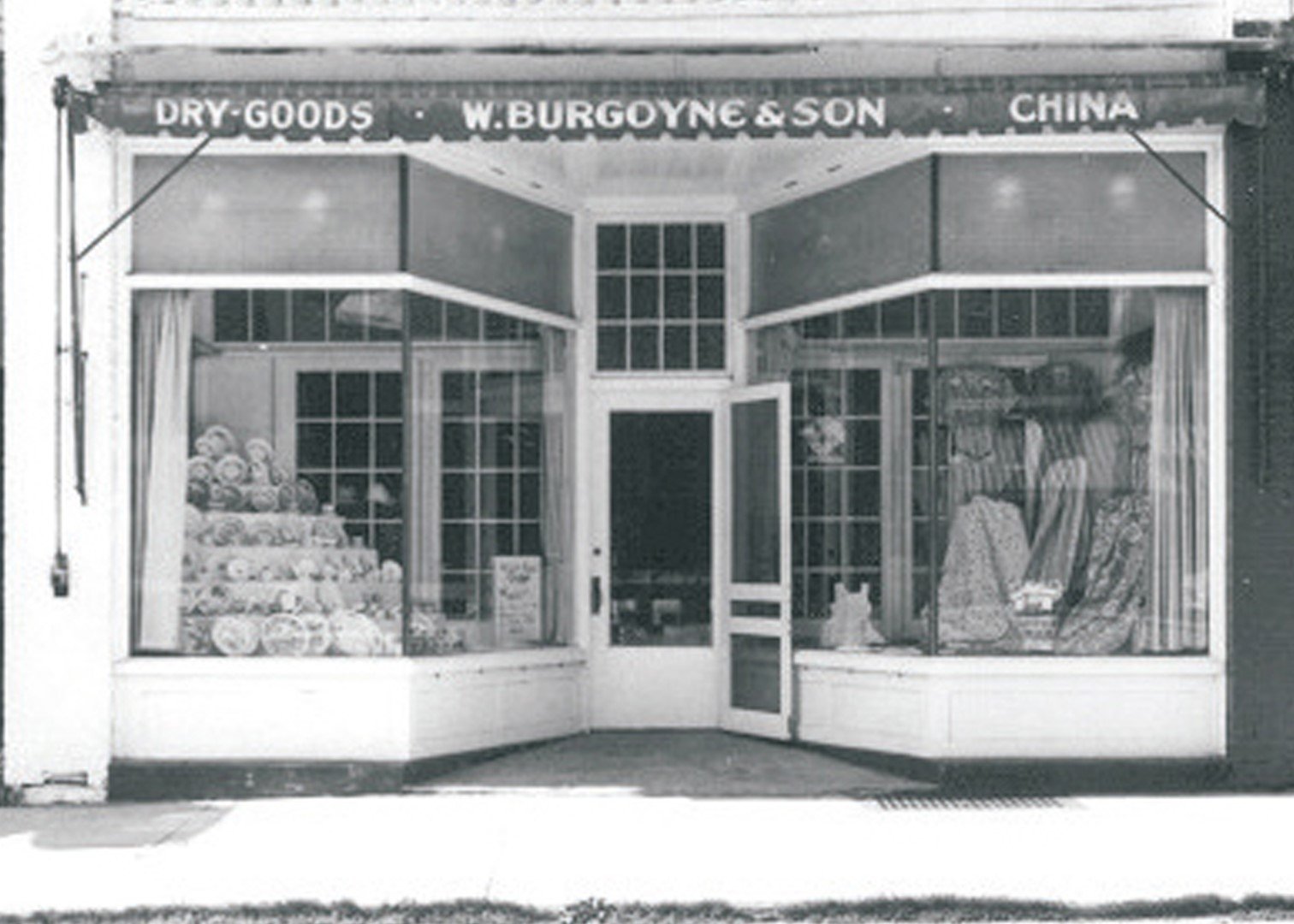 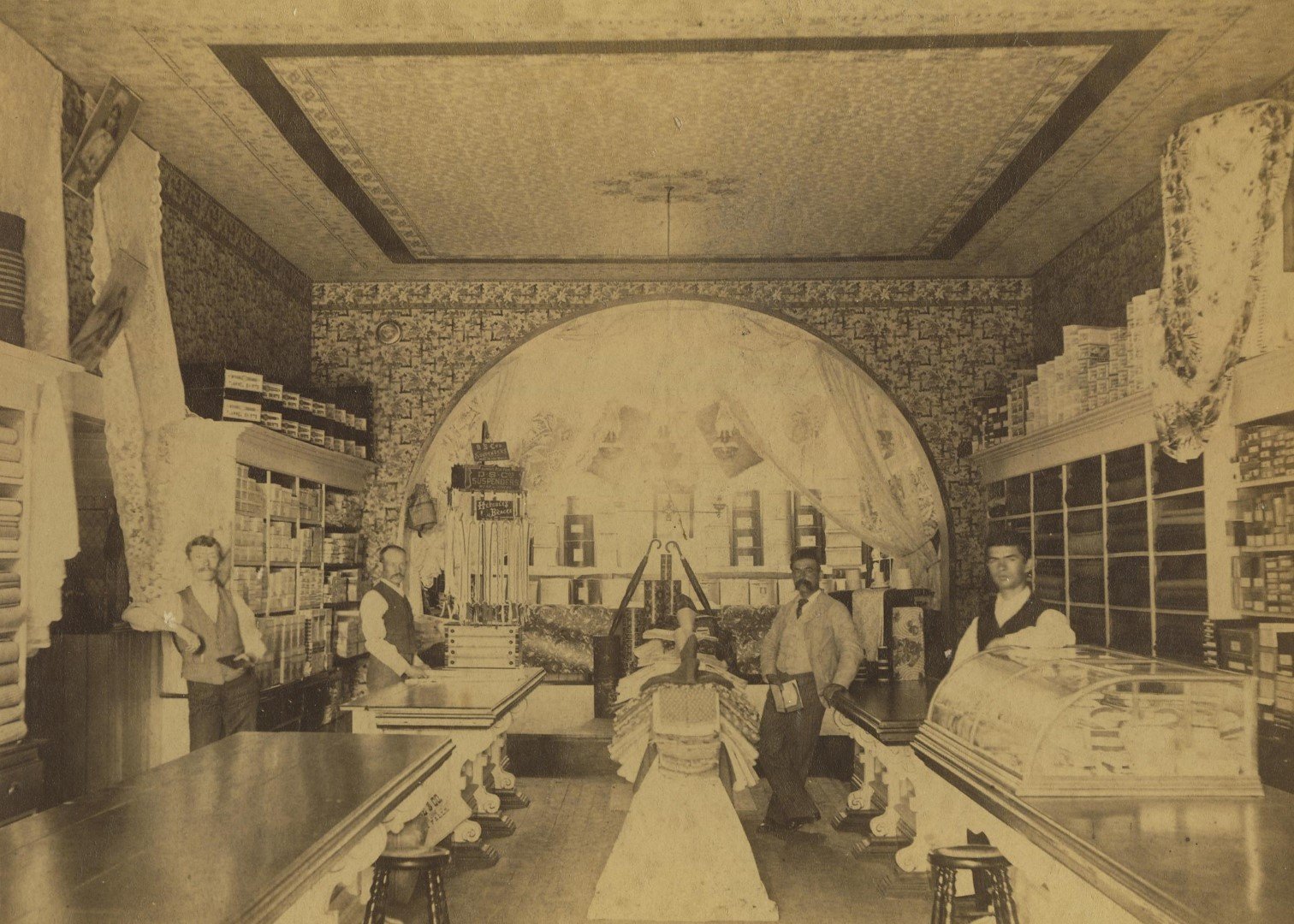 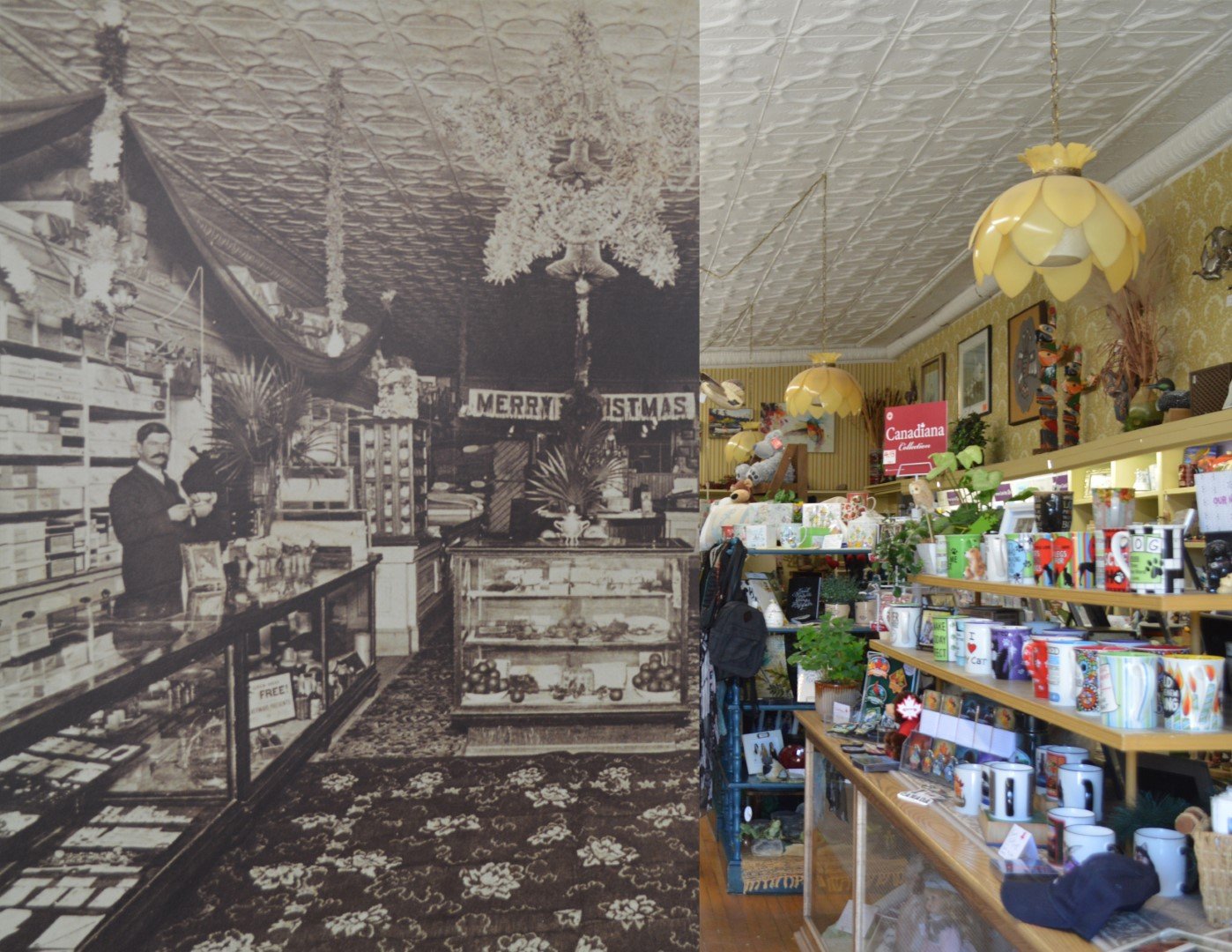 The Entrance to W. Burgoyne & Son

Burgoyne's Store and Watson's Village Shop, showing how similar the stores were, more than a century apart. 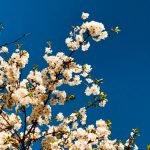 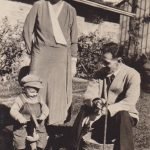