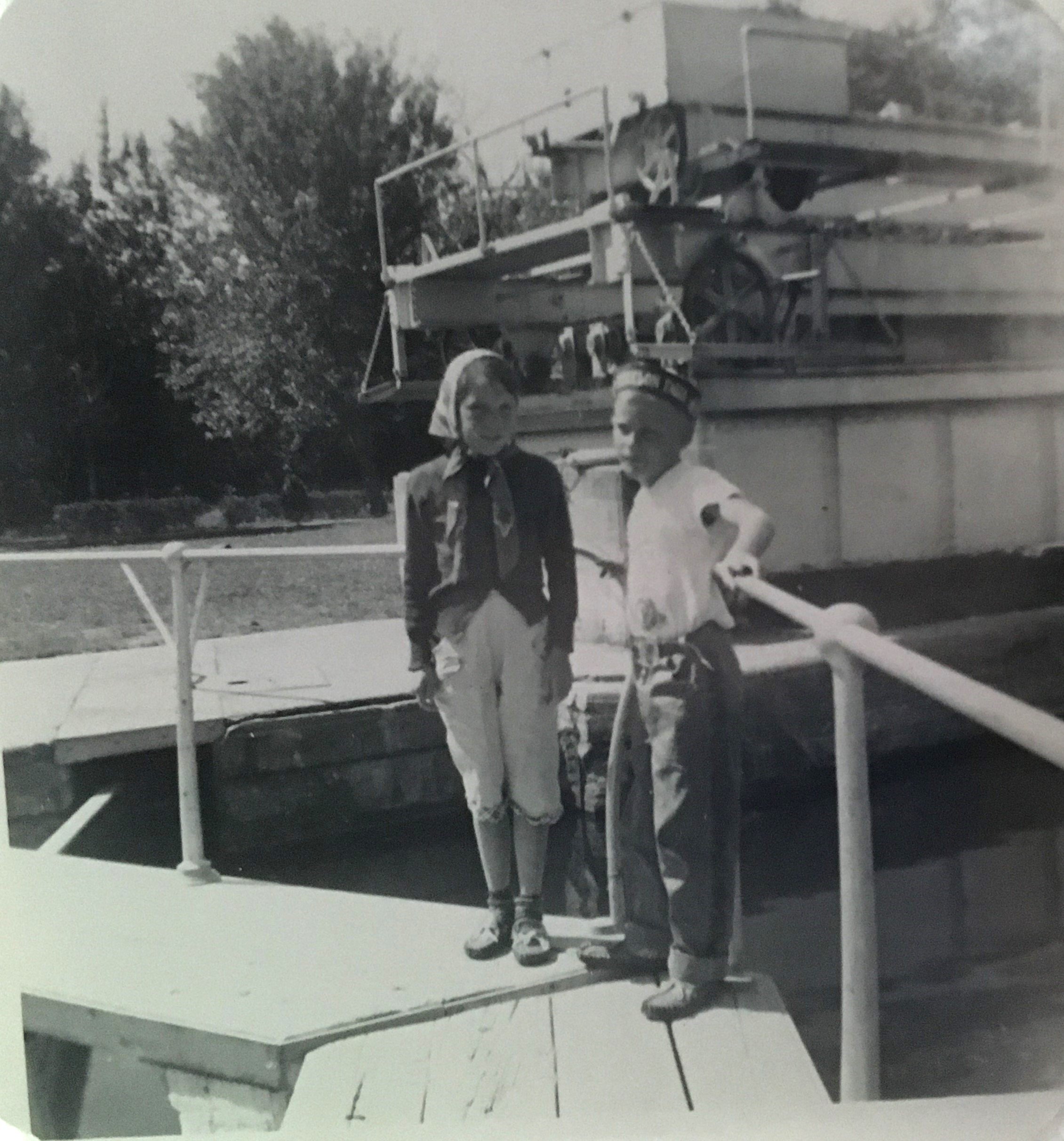 Cheryl and Bob Brennan at the Fenelon Falls Locks, 1950s

In the second half of the nineteenth century, the waterfront communities of Victoria County became a tourist destination with the advent of steamship and railway travel. In those days, there were hotels in practically every waterfront community, served by these transportation networks. Then at the turn of the century, the transportation companies named the region the Kawartha Lakes to promote tourism, but before long, the demand for their services diminished.

In the age of the automobile, visitors were no longer constrained to the old, scheduled transportation routes, and tourist lodges sprung all around the Kawartha Lakes. Being a more casual form of accommodation, visitors often became close friends with their hosts and returned year after year. Staying at a lodge was quite economical—in this generation, most families could afford a summer vacation. Maryboro Lodge was one of the many local accommodations, operated by sisters Belle and Tillie Abbott. Their other sister, Kate, was also a partner, but died young in 1922.

The great attraction of many of these lodges was the chance to spend a summer by the water—it was an era when many people did not have their own cottage. In the mid twentieth century, there were two popular swimming areas in the vicinity of Maryboro Lodge—the canal and sawdust bottom. The canal was perhaps the most popular, with swimmers just jumping in off its wall, and a convenient ladder to climb out.

“When I first went there with my brother in the 50’s, we could not swim by ourselves until we could swim across to the cement piers, touch them and swim back.” If a boat came along we would just have to swim out of the way—there didn’t seem to be as many boats and they didn’t seem to go as fast as today. The water was much clearer, so we could see the bottom, and we loved to collect old bottles.” It was often a busy spot, and boaters got used to keeping an eye out for kids. Even back then kids would jump off the railway bridge. “I can remember once diving into the locks too.”

Cheryl took swimming lessons over at Sawdust Bottom (now the north end of Garnet Graham Park), sponsored by the Fenelon Falls Rotary Club. This beach was located near the former site of Smith and Fell’s sawmill, and though many years had passed, there was still a lot of sawdust swirling around in the water. Many swimmers from the mid-twentieth century could recall having their bathing suit fill up with sawdust.

The railroad cut right through the park (now the Victoria Rail Trail), and Cheryl remembers walking down the track, balancing on the rails the whole way, as they ventured past the campground. “Parents were not as concerned back then. Once we were big enough to swim, we were off on our own playing.”

Cheryl and her friends often made their way to the Sand Hill (where W.G. Jackett extracted aggregate for many years) which for a kid was one of most exciting places to visit. They loved to slide down the sandy mountain, “the sand kept the heat, so it was quite warm in the summer sun. Then we would have to go jump in the lake because we would be filthy, covered in sand from head to toe.”

My brother really liked to help the lockmaster turn the hand crank that opened the gates. “He would go down there and help him for ages. They wouldn’t let kids do that now-a-days. We always waved at the boats as they would go by. My brother also remembered being there when there was a parade with Premier Leslie Frost to put up the historic plaque in front of the museum.”

It seemed like all the kids in town would congregate at Fenelon Dairy. “We would always get a double decker ice cream. They put so much ice cream in it, shoving it right down in the cone. You could get 2 or 3 or 4 flavours at a time, and I liked to try them all. They gave you a lot of ice cream for very little money. They were patient with us kids, and it was the place to be.”

Back then, staying at a lodge could be a rustic experience. Earlier on, the village campground was right across the railway tracks from Maryboro Lodge, but by the time Cheryl was visiting it had just become parkland. Maryboro Lodge was surrounded by cabins for the tourists to stay in. Her family stayed in one to the south of the main lodge, where the sculpture garden is today. It had a wooden ice box, and “we would walk across the train bridge to get ice that was buried in sawdust, right beside the old marina…. If the train came, we would always wave. It wasn’t a scary thing at all, because it didn’t go fast through town. If we were on the bridge, we just jumped off.” Though the Abbott sisters offered meals at the lodge, there was an electric stove in our cabin and we made our own meals—burgers and hot dogs.”

The cabin had no indoor plumbing, and it was not insulated, just framed with wooden siding on the outside. It did have a porch with a view of Cameron Lake and the canal. The Abbotts and their guests used an outhouse. “My brother was going there one evening, and one of the Misses Abbotts was in there, and scared the living daylights out of him. He thought it was a witch and came running for home.”

“The Abbott sisters were lovely ladies, they treated us so well as kids.” They would often sit on the rocking chairs on the verandah, and they really liked when someone came to visit them. A lot of their furniture was old fashioned, and guests spent a lot of time on the verandah. The front parlours of the old house sometimes smelled a little musty.

Belle and Tille Abbott loved to garden and talk about their plants. When Cheryl went over to visit them, they would affectionately “pat us on the head and we didn’t mind that. They were always very pleasant and smiling. My mom and dad became quite close to them and when they moved to Waterman’s Nursing Home in Lindsay, my parents frequently visited them to make sure they were OK.”

When the time came to raise her own children, Cheryl loved to bring them to Fenelon Falls. By then, Maryboro Lodge had become a museum, but they could still go for double decker Tiger Tail ice cream at the Fenelon Dairy and her kids loved swimming just as much as she did. In the 1970s, “we would go swim underneath the falls. There wasn’t the volume of water back then that there sometimes is now. We would collect crayfish, frogs and fishing lures, sell them at the nearby bait shop and the children used the money to buy ice cream.”  On another visit around the same time, “a sailboat tipped over and the mast went straight down and got stuck in the mud just off the beach park in Cameron Lake. A group of us got our scuba tanks on and eventually levered the mast out of the mud.”

Fenelon Falls was a wonderful place to visit and enjoy the simple pleasures of a childhood by Cameron Lake—out on an adventure, swimming and of course enjoying double decker ice cream cones. “There was always lots to do, it was not like childhood today with so many kids spending so much time with electronics.” A summer of fun in the sun was an experience that many kids would remember for the rest of their lives. 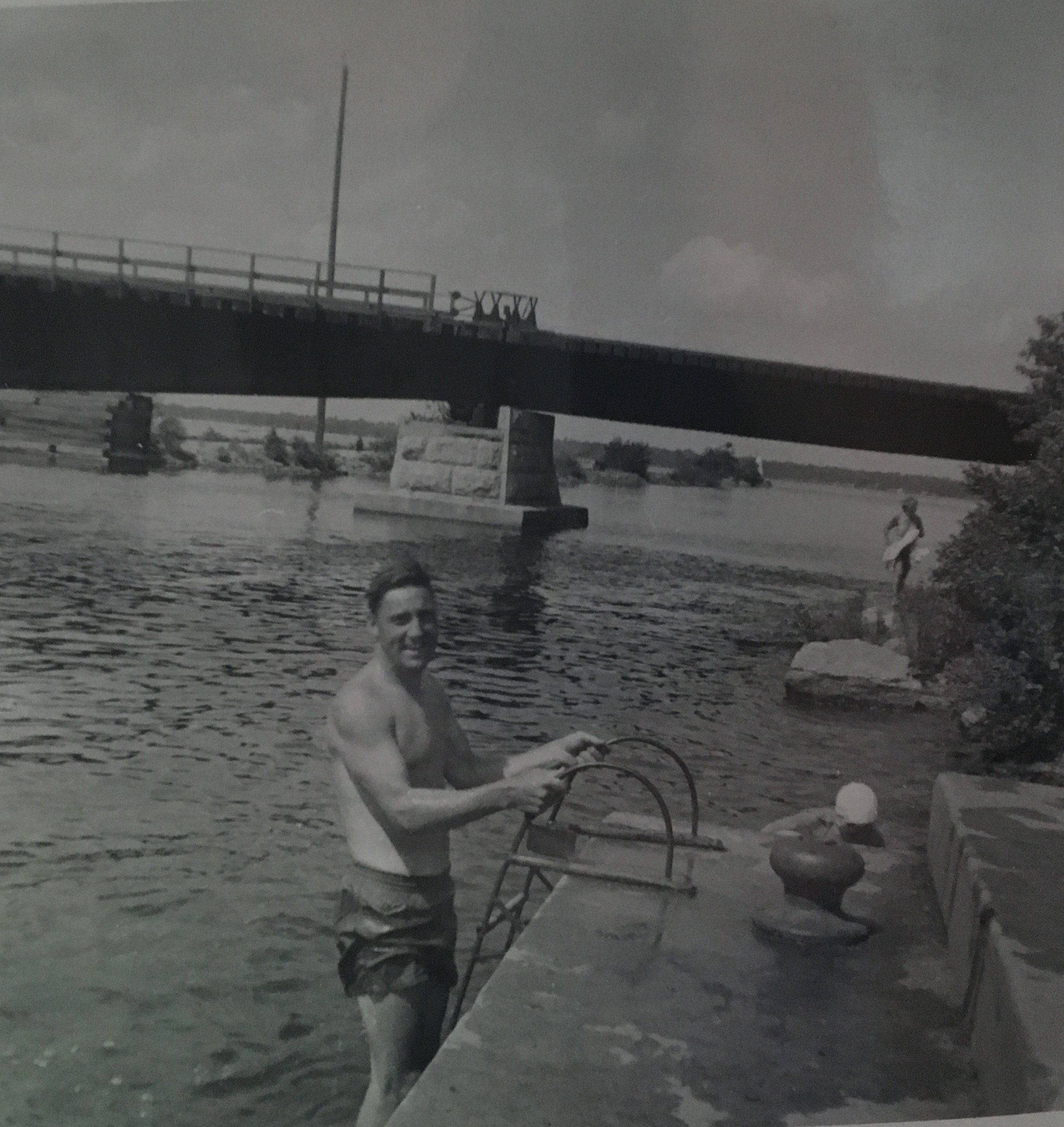 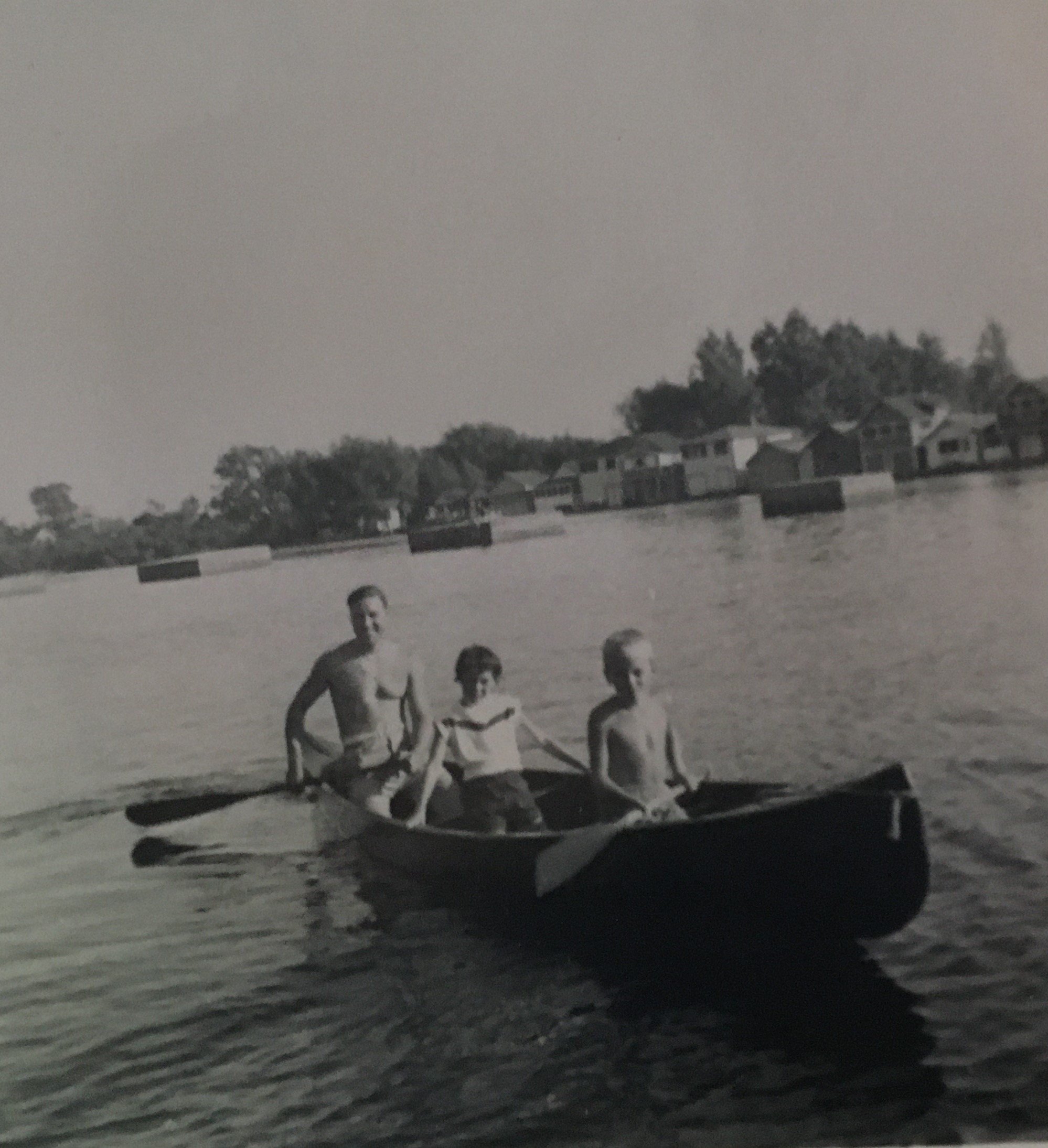 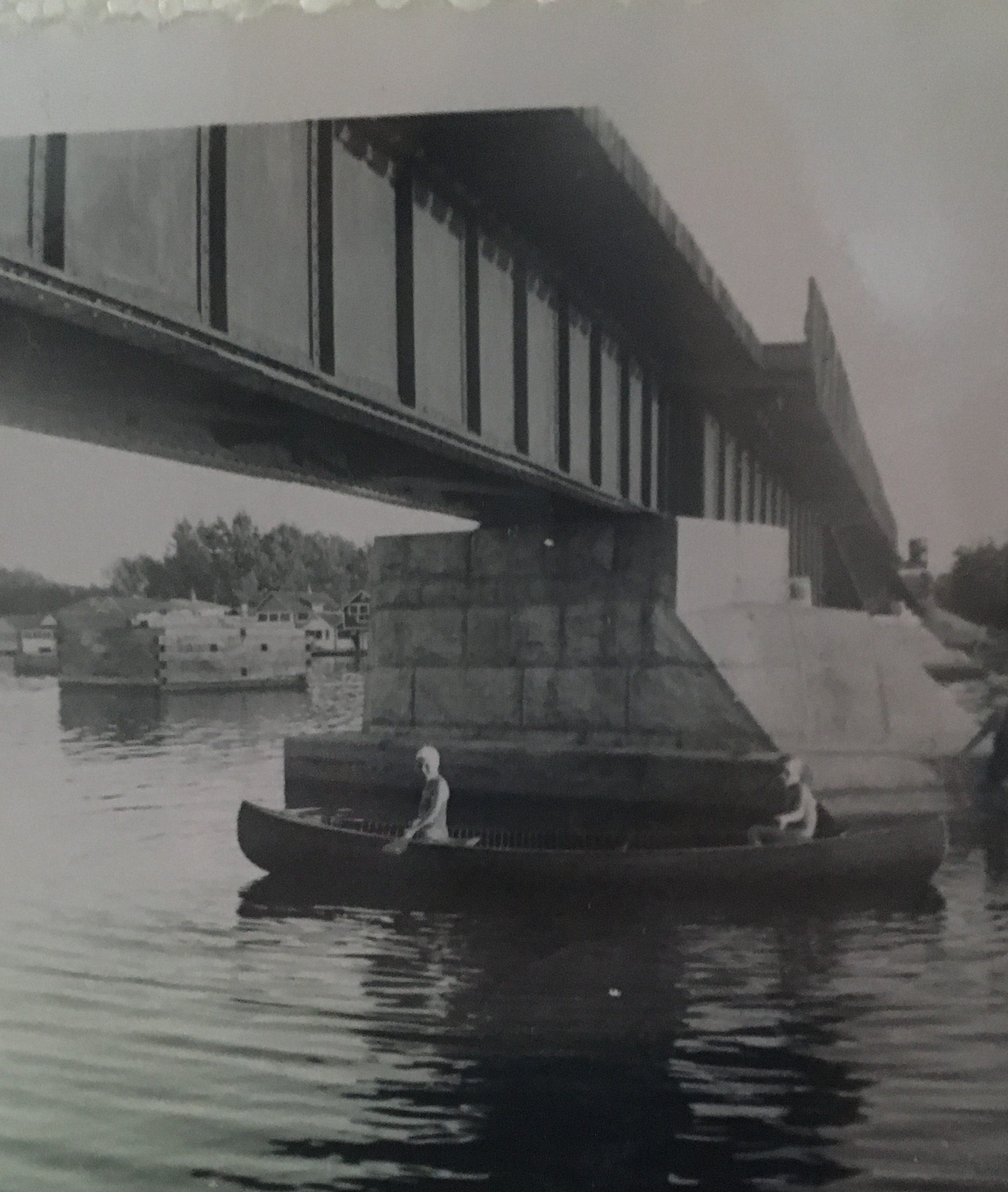 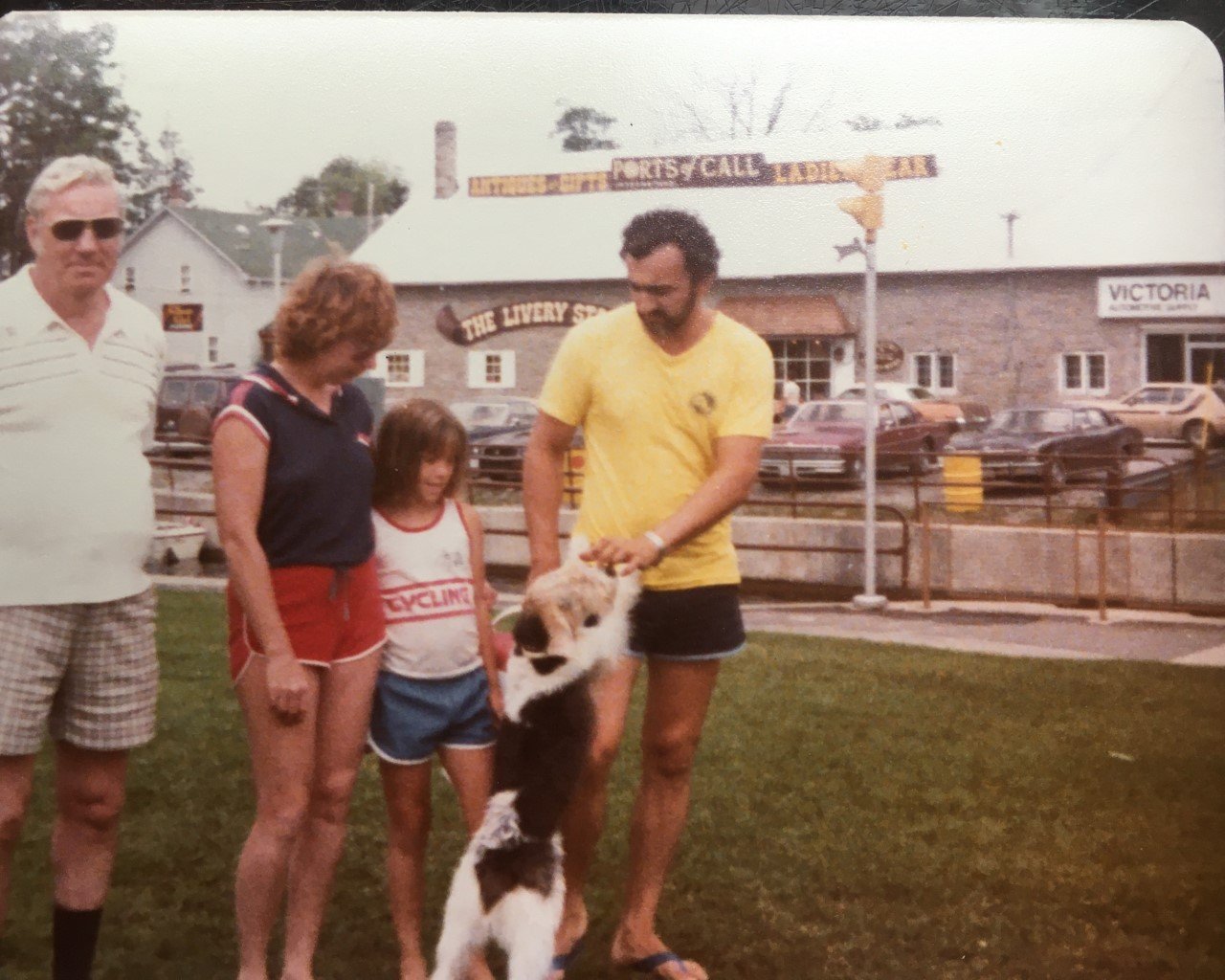 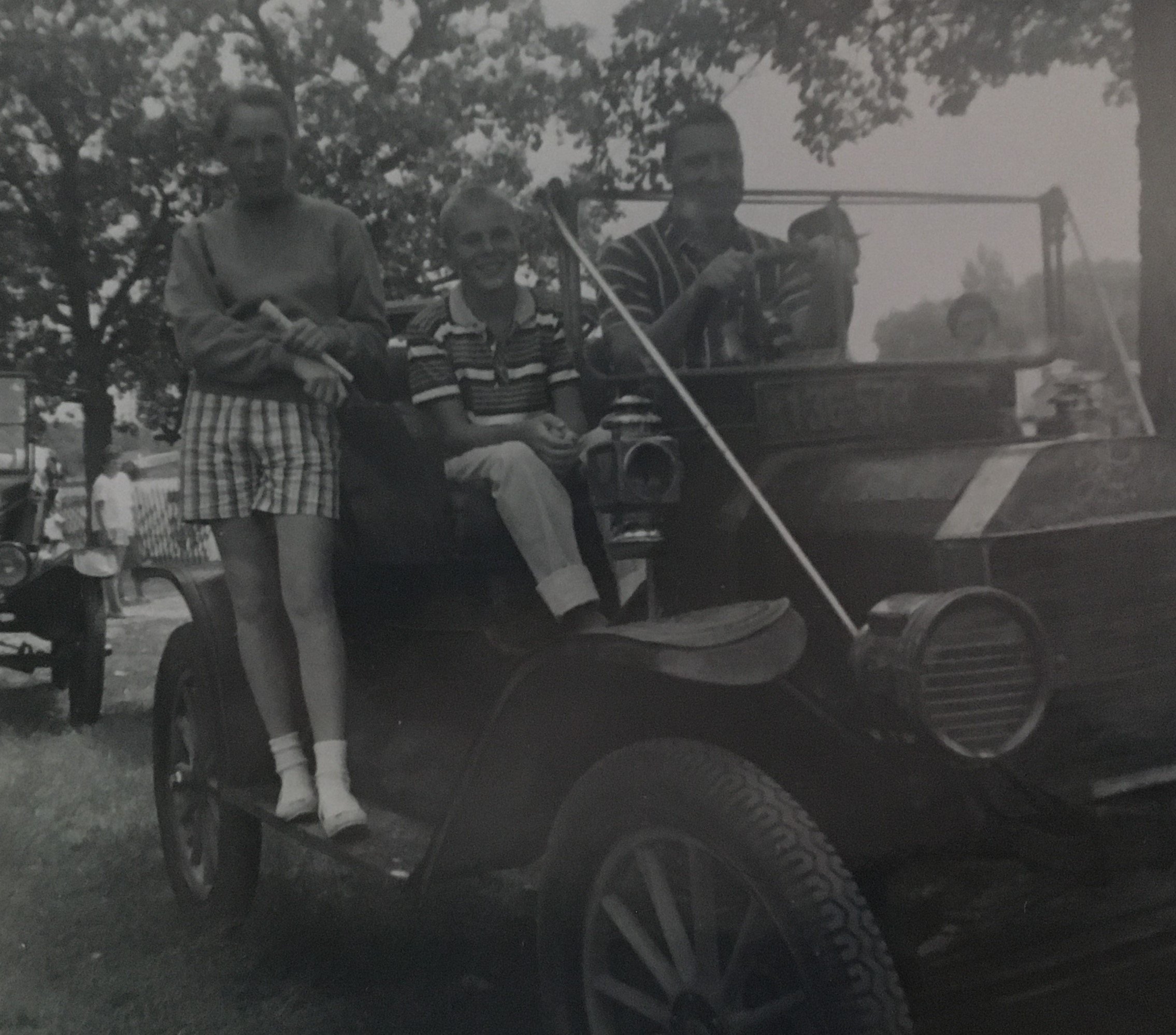 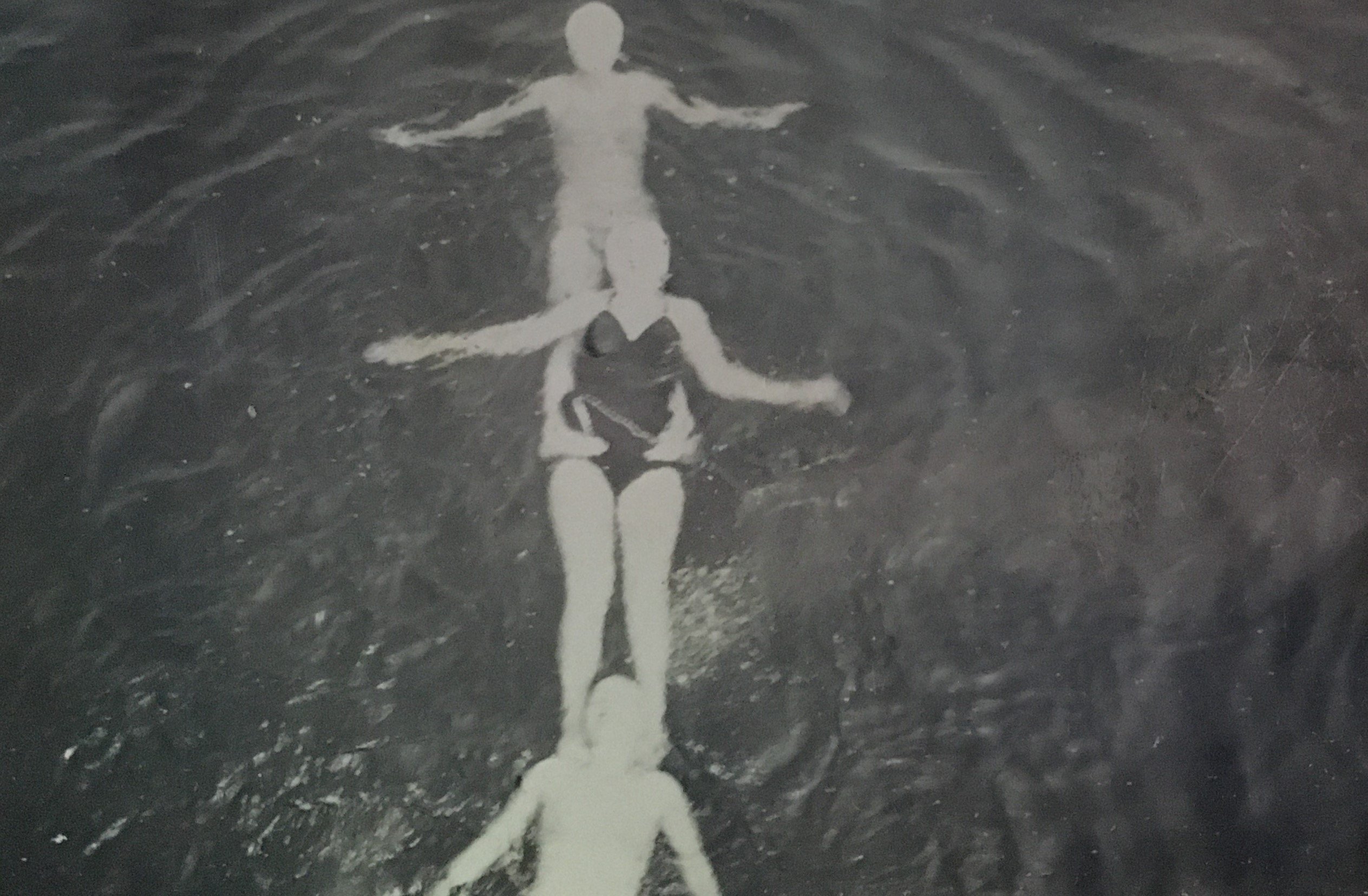 Bill Brennan at the Steps on the Fenelon Falls Canal, with the Swing Bridge in the Background, 1956

Bill, Cheryl and Bob Brennan Canoeing on the Fenelon River

Cheryl and Bob Brennan Canoeing at the Rail Bridge, 1950s

Cheryl and Bob Brennan at the Fenelon Falls Locks, 1950s 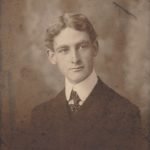