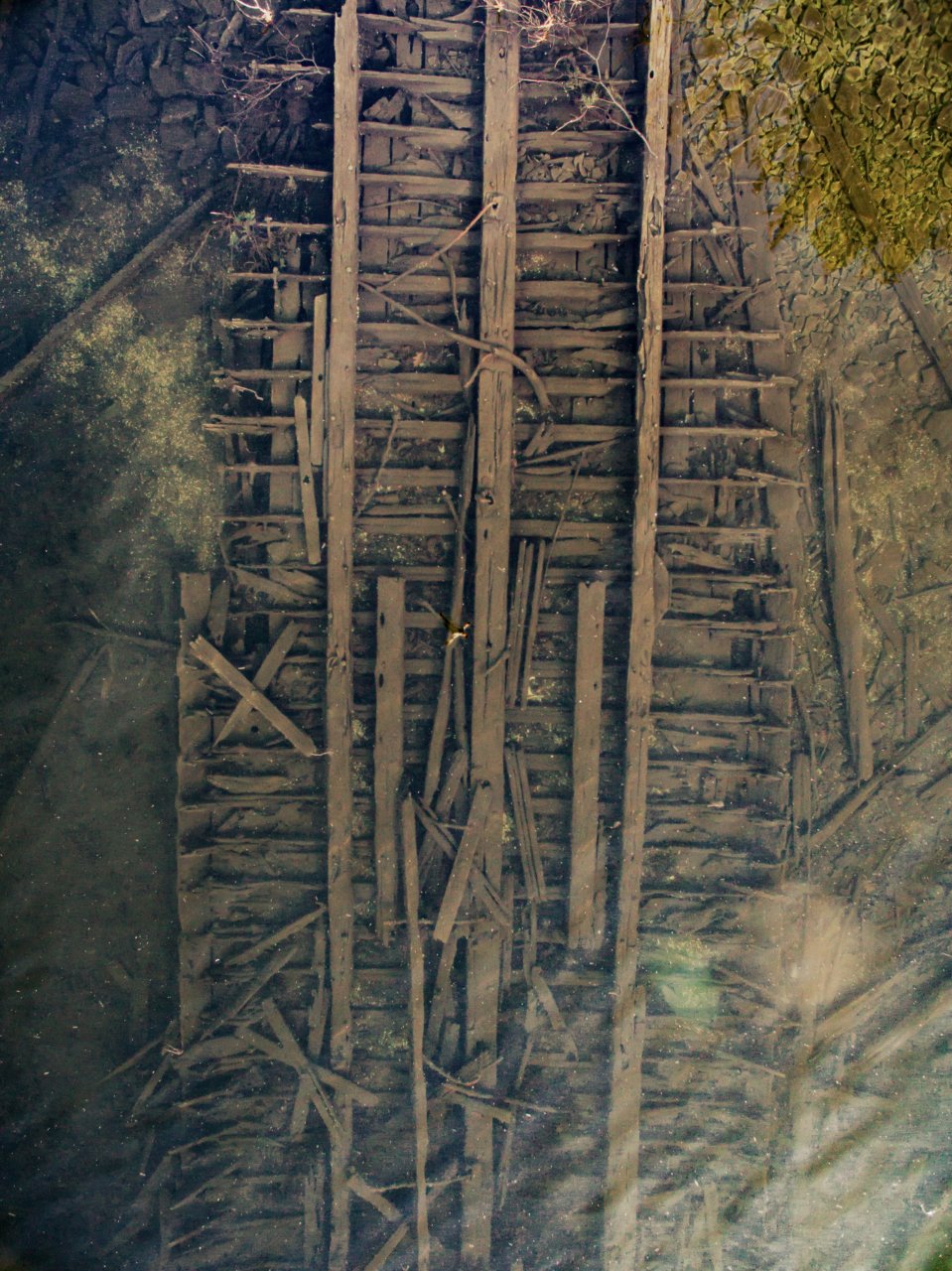 A closeup view of the hull

Every spring I enjoy walking on the dry lakebed when the water is low and always keep an eye out for curiosities. Being someone who loves local history, over the years I have come across the remains of many historic sites in and around Bobcaygeon—an ancient archaeological site, the remains of Boyd’s Little Bob Mill, three lost cabins that were once home to settler families, and part of a floating restaurant on Pigeon Lake. Being vigilant to the clues that remain, it can be surprising how much there is to be found, this outing would prove to reveal something huge.

On this particular walk, I was, as usual, keeping an eye out for anything out of the ordinary—anything from the size of a pebble to a boulder. The first thing that caught my eye were a few cow bones. And then I saw two beams leading into the water. It really looked like something had been built there. When I looked more closely, it seemed to have been a ramp. Maybe ten or fifteen feet to the side, I spotted a huge wooden structure under water. As it came into focus, it looked like the hull of a large wooden boat. I returned with my drone and the full scale of a shipwreck was revealed. I went back several times on calm days to capture a set of photographs. But what was this forgotten shipwreck?

In the early 1830s, the region known today as Kawartha Lakes were nearly untouched by European industrialization. With much of the flatter and more fertile land to the south already being improved, purchasing a farm in the townships closer to Lake Ontario would be more expensive. To the north there was this navigation route that had already been in use for thousands of years by the region’s indigenous people. For the next generation, thousands of immigrants arrived and transformed what was to them a frontier of the British Empire.

In 1834 Mossom Boyd came over and was among the community’s first British immigrants. Being an orphan from a military family, he arrived with almost nothing but was driven to succeed. He took a job working for Thomas Need who owned Bobcaygeon. This work was at his sawmill, located at the locks. Eventually Boyd came to own the village. Though he did not have the largest mill in the area, Boyd was a shrewd businessman, and became “The Lumber King of the Trent” and a millionaire in an era when that was exceptional.

The year is 1861, Bobcaygeon and this part of Canada were still being carved from the bush, as new settlers arrived from overseas each year. The roads connecting Bobcaygeon to other communities were rough paths through the woods, filled with mud holes and stumps. As logs were being floated to the mill from further away, and lumber exports were increasing, Boyd needed a steamship to help tow logs and barges filled with lumber.

As its name suggests, the Novelty was Bobcaygeon’s first resident steamship. Mossom Boyd had the 80 foot paddlewheeler built at Bald Lake (near Buckhorn) in 1861. The Novelty slowly chugged along the waterway and through the Bobcaygeon Lock, which was the original station on the Trent Waterway. Making frequent trips to Lindsay, hauling excursion parties, and bringing in logs from all directions, the ship’s first years of service did not pass without damage. In 1865 the ship caught fire and the remains were rebuilt the next year. In 1870, the ship was hit by a tornado attempting to reach Bobcaygeon and was violently thrown on its side. In consecutive years its boiler tank exploded twice and it even survived multiple attempted arsons in the 1870s.

It’s now 1877 and Mossom Boyd has decided to rebuild his 16-year-old, slow and battered ship. It was lengthened to 94 feet, received a more powerful engine and relaunched the next year as the Beaubocage. The name Beaubocage is derived from local folklore. In 1615, two centuries before the waves of European migrants streamed to the region, Samuel de Champlain (founder of Quebec City and New France) traversed these ancient navigation routes on his way to fight in a battle against the Haudenosaunee (Iroquois) who lived south of Lake Ontario. At the time, both the French and English backed different nations. On this journey by birch bark canoe, the war party presumably portaged right through the future site of Bobcaygeon.

In his published journal, Champlain recorded, “the whole country is very beautiful and attractive” (French: “tout ce pais est fort beau & plaisant”). Centuries later, the Boyd’s Trent Valley Navigation Company explained in their tourist literature that, when Champlain passed through the village, he described it as “beau bocage” (beautiful wooded pasture), hence the name Bobcaygeon. To this day, many people believe that the name Bobcaygeon is the French wording from Champlain, but seventeenth century documentation to back this claim is lacking. In the published journal, he doesn’t specifically mention the site of Bobcaygeon at all. The name Bobcaygeon was actually from Michi Saagiig (Ojibwa) origins, being a manipulation of bkijjwang, a verb that means that the water flows around rocks. An English speaker might instead use a noun, to say it is a set of rapids. It literally described the natural feature at this site. As newly arrived English speakers tried to record and mispronounced the name, it quickly became Bobcaygeon.

As the newly named ship was relaunched in 1878, the Trent waterway was being navigated by more steamships than it had been when the Novelty first sailed, and new locks were slowly being added to the route. In 1883 the Boyd Family formed the Trent Valley Navigation Company to provide steamboat service on the nearby lakes. As more elaborate boats like the Esturion entered service, the Beaubocage was the oldest ship of this fleet, so it was largely relegated to its original task of log and lumber towing, but still occasionally towed passengers. By the time photography became common in the late nineteenth century, the ship was primarily used for towing, and was not photographed for the promotional material crafted to attract tourists and cottagers. There are only two known photos of this ship. In one photo, it just happened to be in the background and in the other it’s mostly blocked from view by the scow it was towing, named the Paloma. Built in 1886, the scow Paloma had no engine and when towed could carry 750 passengers. It is also remembered for transporting the beefalo (then called cattalo) between Boyd’s farm south of Bobcaygeon and the pasture on Big (Boyd) Island.

In 1900 the battered Beaubocage was sold at auction to Kennedy & Davis of Lindsay. Afterwards, the buyers decided to invest in a smaller ship instead, the Maple Leaf. The Beaubocage retired by 1903 to coincide with Boyd’s final log drive. Boyd was shutting down the Bobcaygeon mill and moving their lumbering operations to British Columbia. With the end of Boyd’s industries that had been so important to the local economy, Bobcaygeon’s population dropped from around 1400 to 850 and the surrounding area dropping by around 500 more. As the village was in many ways a shell of its former self (its population did not recover until the 1970s), and the written history of the Beaubocage ended.

Over the years, a lot of Bobcaygeon residents discovered the shipwreck as they swam near the village, when the location was more accessible. For generations of kids, the shipwreck was one of the mysteries that made Bobcaygeon unique. Many dreamed up stories of the ship that lay under the waves. As the years passed, it became part of the local folklore. Some people had different theories of which boat it might be.

After my discovery in the spring of 2022 and finding out how little information there was online about local ships, I contacted Glenn Walker of Maryboro Lodge Museum, without whom I could not have written this without, an he consulted with the Boyd Heritage Museum. Around two decades ago, the Trent-Severn Waterway had studied the remains and concluded that it likely is the Beaubocage. Without supporting documentary records, it is very difficult to conclusively identify a ship, especially when so little of it remains, other than the hull and other broken sections. With more research and countless emails, phone calls and books searches I found further details shedding more light on this forgotten relic. The museums explained that structure beside the ship was “The Ways.”  This was the Boyds slipways and where they had kept their boats over winter at the site since 1873. In 1900 they constructed a marine railway, that was an upgrade over the dry dock that the Department of Railways and Canals added to the Bobcaygeon dam in 1890. The Ways allowed the company to pull their boats out of the water, to store and repair them over winter. By 1904, one year after the sawmill shut down, the railway came to Bobcaygeon and the era of steamboats was in decline.

If Bobcaygeon’s forgotten shipwreck is in fact the Beaubocage, the community’s original steamship, it is a priceless piece of the village’s history. Over the years, this paddle wheeler impacted a lot of people’s lives. Hopefully, by sharing this story, information on the ship will be accessible and it will not be forgotten again.  To help protect the wreck from being vandalized or accidentally damaged we aren’t going to disclose the exact location, somewhere in or near Bobcaygeon, until it can be properly documented and protected. Some small steps in this direction are presently underway. Measurements will be conducted in the coming year so more information can be gathered. For anyone else who has discovered this relic, we would appreciate it if you didn’t publish the location until it can be preserved by Parks Canada. We would of course appreciate seeing any historic images of the ship or the wreck. 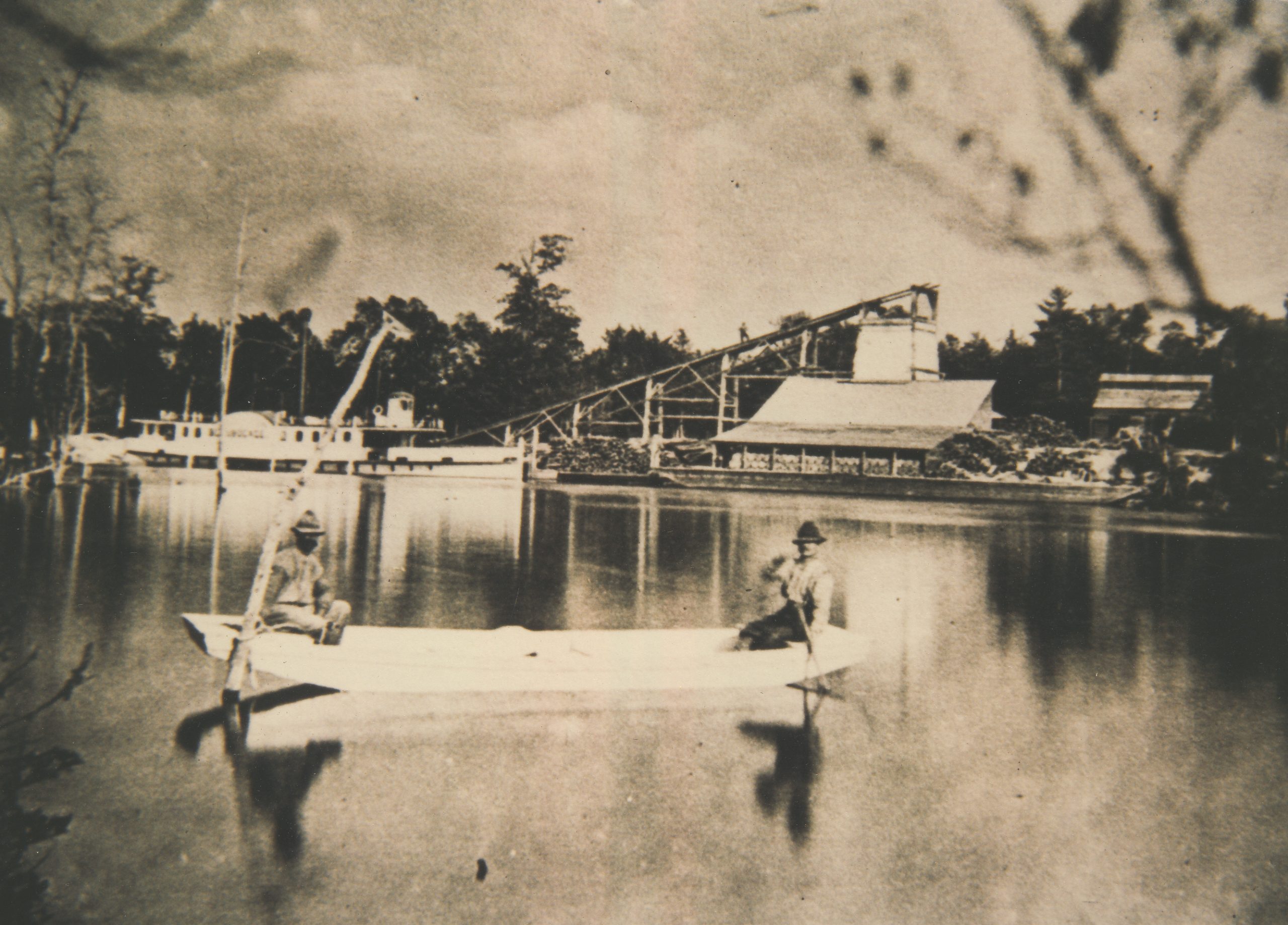 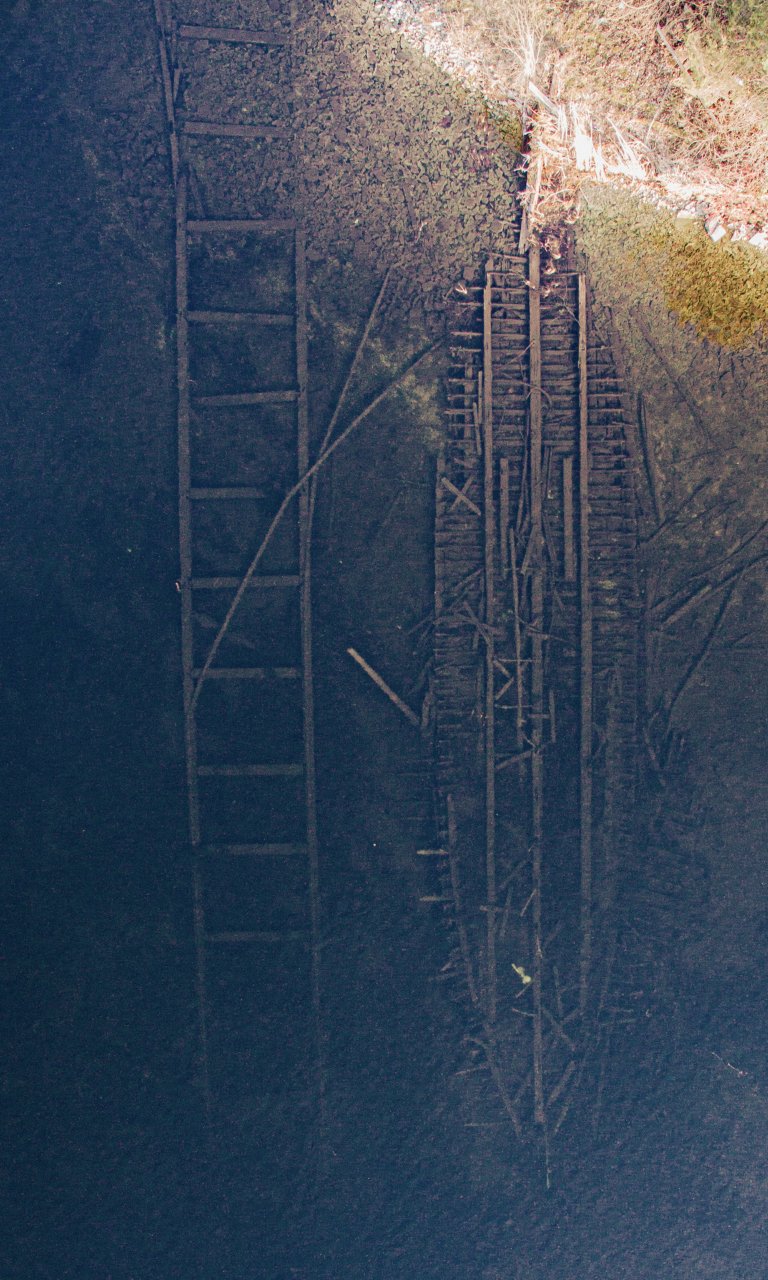 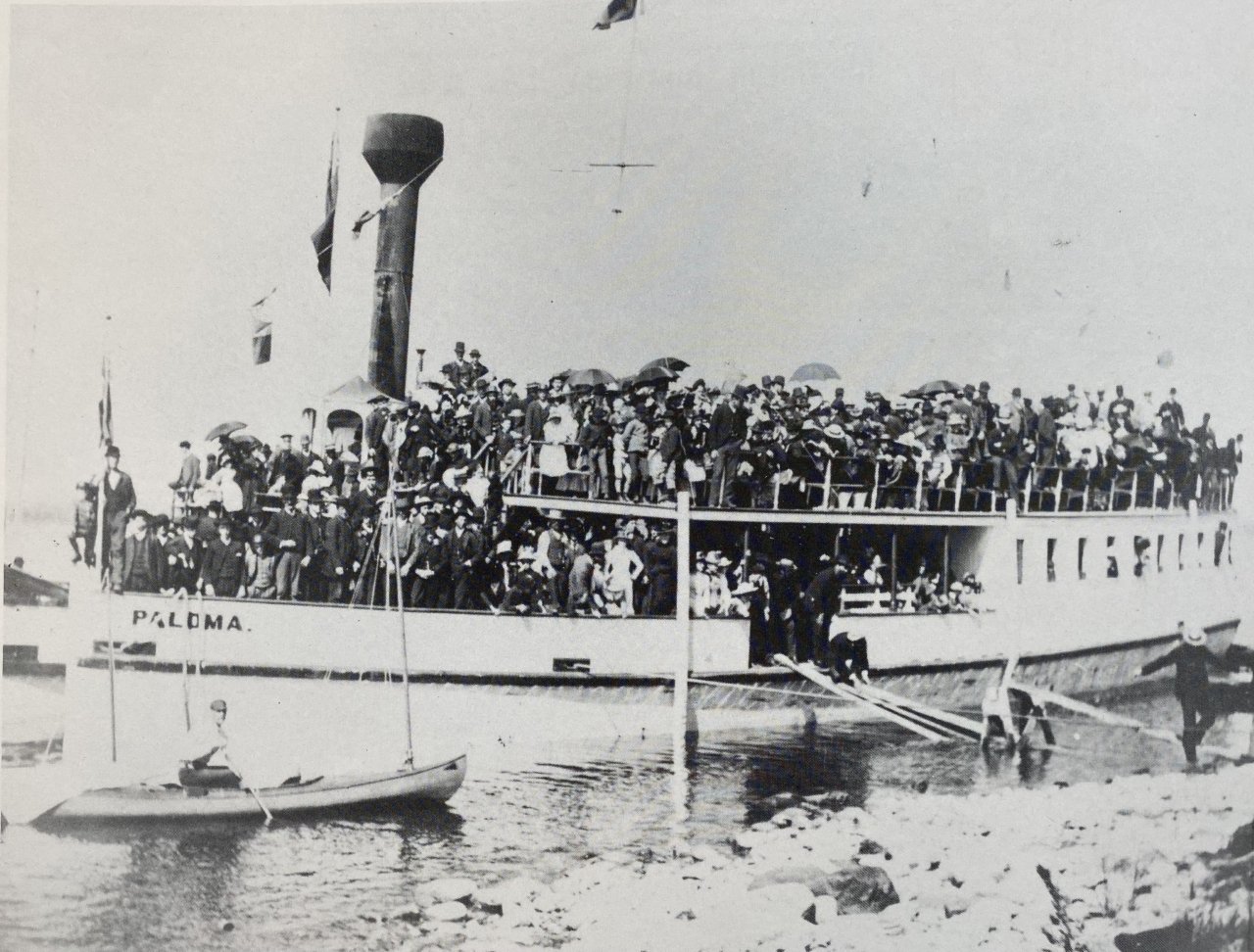 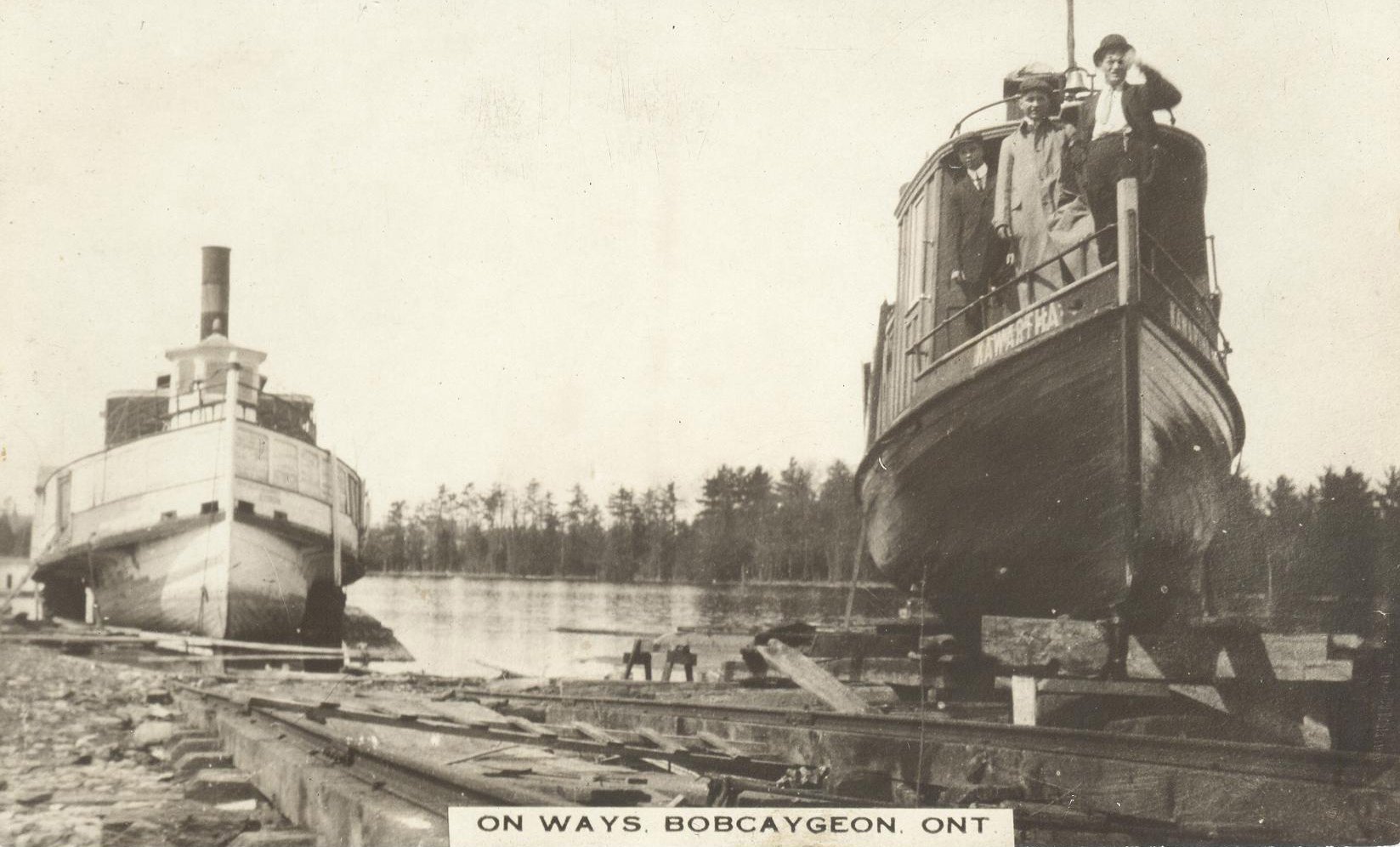 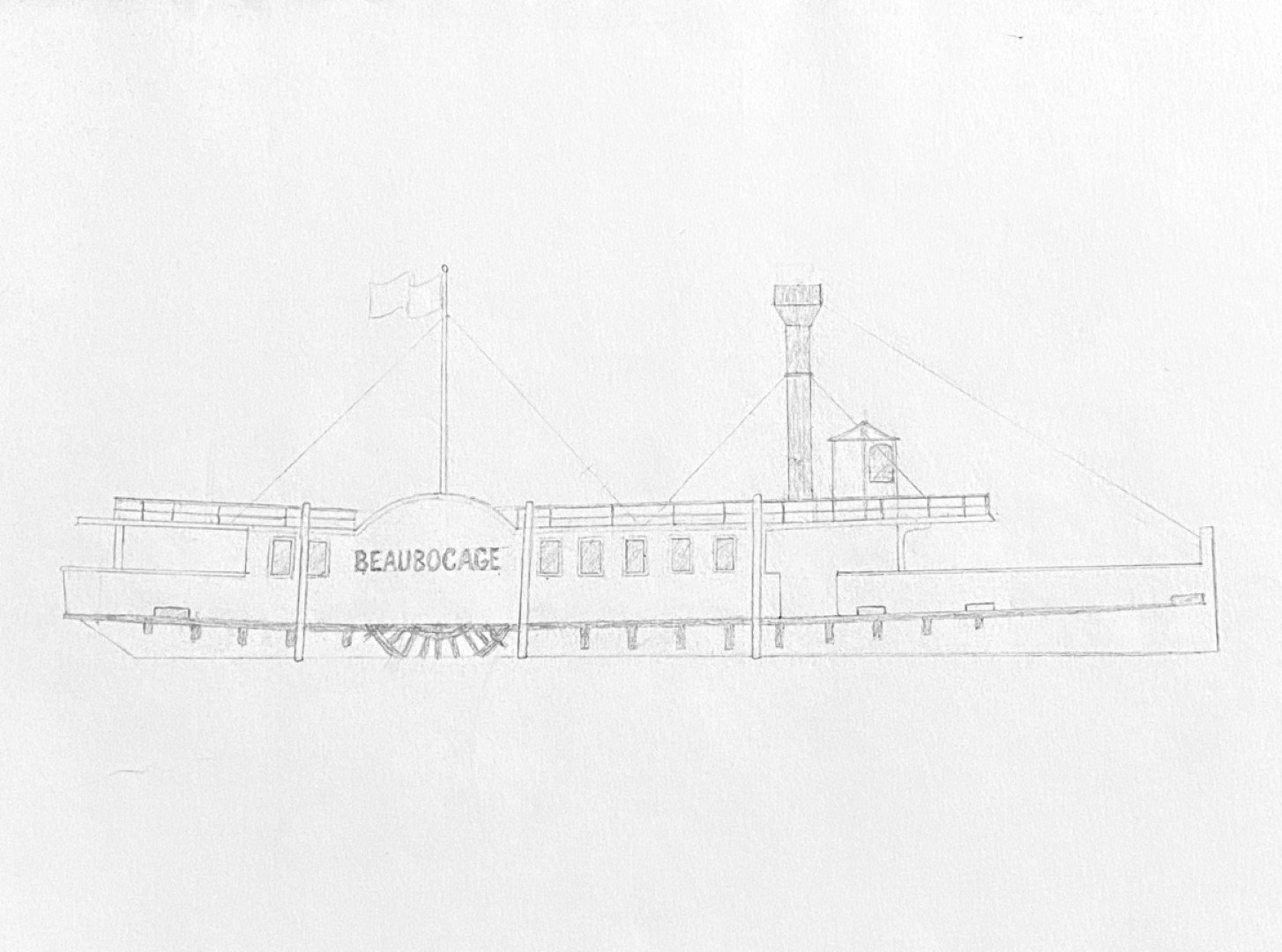 In the photograph of canoers on Big Bob Channel, the Beaubocage appears in the background, beside the lime kiln

An overhead view of the shipwreck and the (Ways) slipway ramp

The Beaubocage sits behind the Paloma on an excursion to Jacob's Island. The smokestack, wheelhouse, second level deck railings, and a bow section of the Beaubocage are visible.

The Esturion and Kawartha at the Ways

James Row's sketch of the Beaubocage, based off the known photographs of the ship

A closeup view of the hull 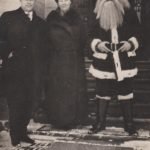 A Look at Santa Claus Through the Years in Fenelon Falls 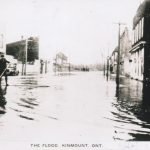